A Saturday Night at Pizza Provencale

Pizza Provencale has been a long-term fixture of the Clifton Village dining scene, and from the outside exudes a small restaurant charm that is backed up by the wicker serving plates, and that the place is always absolutely packed out. For me then, it was one of my most mixed eating experiences of recent times.

Fridays and Saturdays the venue does not take advance bookings, and we benefited from this by being able to arrive around 8:30 in the evening and get a table for two, with the minimum of waiting. The back of the restaurant has a nice cosy and rustic feeling, greatly aided by a glass roof that lets lots of natural light and in the evening creates a nice effect for the candlelight. The waiting service was excellent too with our drinks order being taken and served quickly. All in all, off to a great start. And the drinks were very reasonably priced too, with the house white wine being inexpensive and of a refreshingly light citrus taste.

The range of pizzas at Pizza Provencale is wide and varied, and there are some interesting and unusual choices too that look well worth checking out, plus they also do a gluten free option on pizza bases, which is rare but heartening especially for two gluten free bloggers we know. The standard 12" size is recommended as being a pizza for two so Abby and I opted for just the one regular Charcuterie, a selection of mixed meats and we added some mixed peppers. We were then made much hungrier when we saw the other tables around us receive their food, in particular one lady who had a giant whole rack of ribs that looked delicious. Bizarrely we received a rather uninspiring looking bowl of salad, which we hadn't expected, but free salad, why not? Just as were about to dive in, the head waitress came back, scooped it up and moved it to another table. Easy come, easy go.

We had a fair wait for our food, which was clearly the result of the waiting staff getting an order wrong, as the couple enjoying a romantic meal to my right had a pizza arrive, that looked exactly what we had ordered, only for the waiter to arrive to attempt to remove it, but to no luck, as they had already started. Still, not a problem, as it looked great, and ours was bound to look just as good. Oddly then. 40 minutes after ordering, it didn't look as good. Whilst the meat topping was both plentiful and tasty to look at, the uncooked peppers we had looked as though they had hurriedly chopped up and thrown on at the last minute as an afterthought. Comically we even had a whole third of pepper in one giant piece on one slice. The pizza though was excellent. Generally I'm not a fan of the thicker based varieties but this one had a nice flavour and texture and all of the base toppings were delicious, while pleasingly the chef hadn't decided to stint on the cheese. 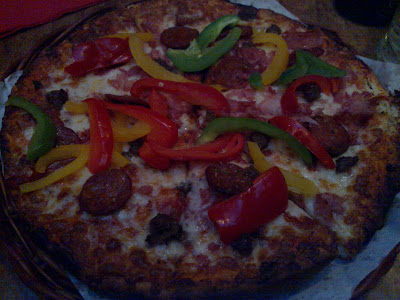 There were a fair few downsides however to dining at Pizza Provencale, at least on this occasion. To my right we had a rather sweet and young romantic couple obviously besotted with each other, which was particularly heart-warming. However on my left we the loudest, drunkest, most obnoxious group of diners I've ever had the misfortune of sharing a restaurant with. Now I know that this isn't the responsibility of the restaurant to deal with, but surely when you have boorishly load diners yelling at the top of their voices, swearing loudly, and watching YouTube videos on their mobile for the whole room to hear, surely someone should consider having a word with them in order to ensure the comfort of the other people eating in the restaurant. They were annoying to us, but we were having a casual night out. For everyone else who was having a more intended formal or intimate affair, I imagine it would have swayed them not to leave a tip or indeed ever return.

It took a while to flag down a waiter to pay the bill, but overall the price was pretty good. The food was also good, but the overall experience wasn't. It felt a bit manic and chaotic, and the fact that other eaters there could so easily ruin many other peoples nights out really lowered it for me, and probably more for others there. I would though go again, not as a first choice, and I wouldn't be overly enthusiastic to head back. But they do have an interesting menu, good value and good looking food and on a week night it would more than likely be a great place to eat out.

To check out the menu please visit their website.
Posted by Abby and Rich at 11:36