A Sunny Lunch from Baowow

Last Wednesday was an abnormally hot day, Summer in it's death throws, and Jayne and I had arranged to meet for lunch, we had chosen Baowow on Baldwin street and to take our choices to Castle Park to enjoy the last hot hot heat of the year.  It's a venue I've been wanting to try for a while as it offers something a little bit different for lunch than most central Bristol venues. Run by the same people who make the Thai food at the Old Fish Market, if I remember correctly, this is something a little different than what they serve there.

At Baowow they celebrate the bao, amongst other things, the Chinese bun, we know them best in the char siu bun form but at Baowow they like to experiment with this classic and have many options to choose from as well as noodle and rice pots. Taking the flavours of Thailand, China, Japan, Taiwan and Vietnam and combining them to form a pretty tasty sounding menu. My main personal gripe is that about 75% of the dishes contain coriander, which to me tastes like evil, but I am not going to hold that against them as it's just what I feel. 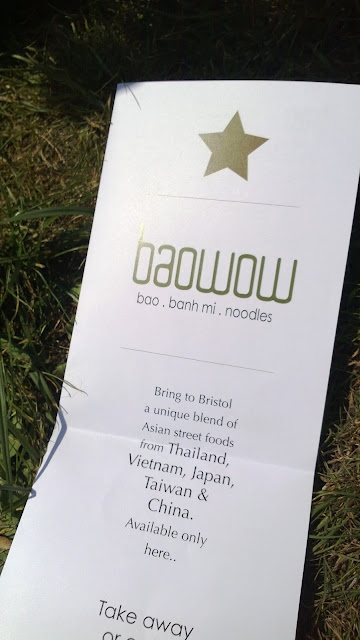 The inside is small but has a few tables for eating in, it is nicely decorated with some great blackboard work on the walls, there was a bit of a queue and waiting in the sweltering heat was tough but we powered on through. I was going to go for a bao but it had been a very heavy lunch week so I decided to try one of their noodle pots instead.  I chose the Thai roast pork and noodles whilst Jayne went for the chicken katsu with noodles. We headed off to the park to consume our giant pots of noodles and meat.
After picking out all the coriander I could find I gave the pot a good stir to make sure things were properly mixed in as the noodles at the bottom were totally naked. The portions at Baowow are certainly generous you get  a nice lot of pork and khao moo dang sauce, which tastes quite a lot like char siu sauce to me, and the overall impression was a tasty one. I still could have done with even more sauce but this could have been down to the need for even more vigorous stirring by me. I would go back to Baowow but it wouldn't be my first choice, it was tasty but did not have the wow factor for me, but I would take a chance on one of the baos next time.
I always welcome a new cuisine choice near my office as although I don't go out to lunch often it is nice to try a new place to see what they have to offer. It still doesn't beat the previous lunch out at Sandwich Sandwich but the fresh flavours and healthy sized portions mean that you won't go hungry here either! To see what Baowow has to offer, visit their website.
Posted by Abby and Rich at 11:53