Happy New Year all, I still have an ounce of Christmas cheer left and I decided to spend it on writing about the Christmas meal we had at the Famous Royal Navy Volunteer. I was tasked, as the resident food fanatic, with organising the Christmas meal and it was a job I took very seriously.  With a very short amount of notice and a short list of favoured restaurants the tastiest option and one I fancied most was the menu for the Navy Volunteer, after a recent renovation this place has become hugely popular. Three courses for £27.50 with amuse bouche and mince pies tacked on the front and back end, plus I'd never eaten here before and had heard a great deal of praise for the food.

The menu had some mouthwatering options such as Salt Marsh lamb with a lavender crust and chocolate tart with an oreo base and peanut butter ice cream. I decided to opt for the goats cheese bon bons on a beetroot risotto, pheasant breast with sausage and sage stuffing and all the trimmings and to top it off an apple, brandy and cinnamon cheese cake for dessert. 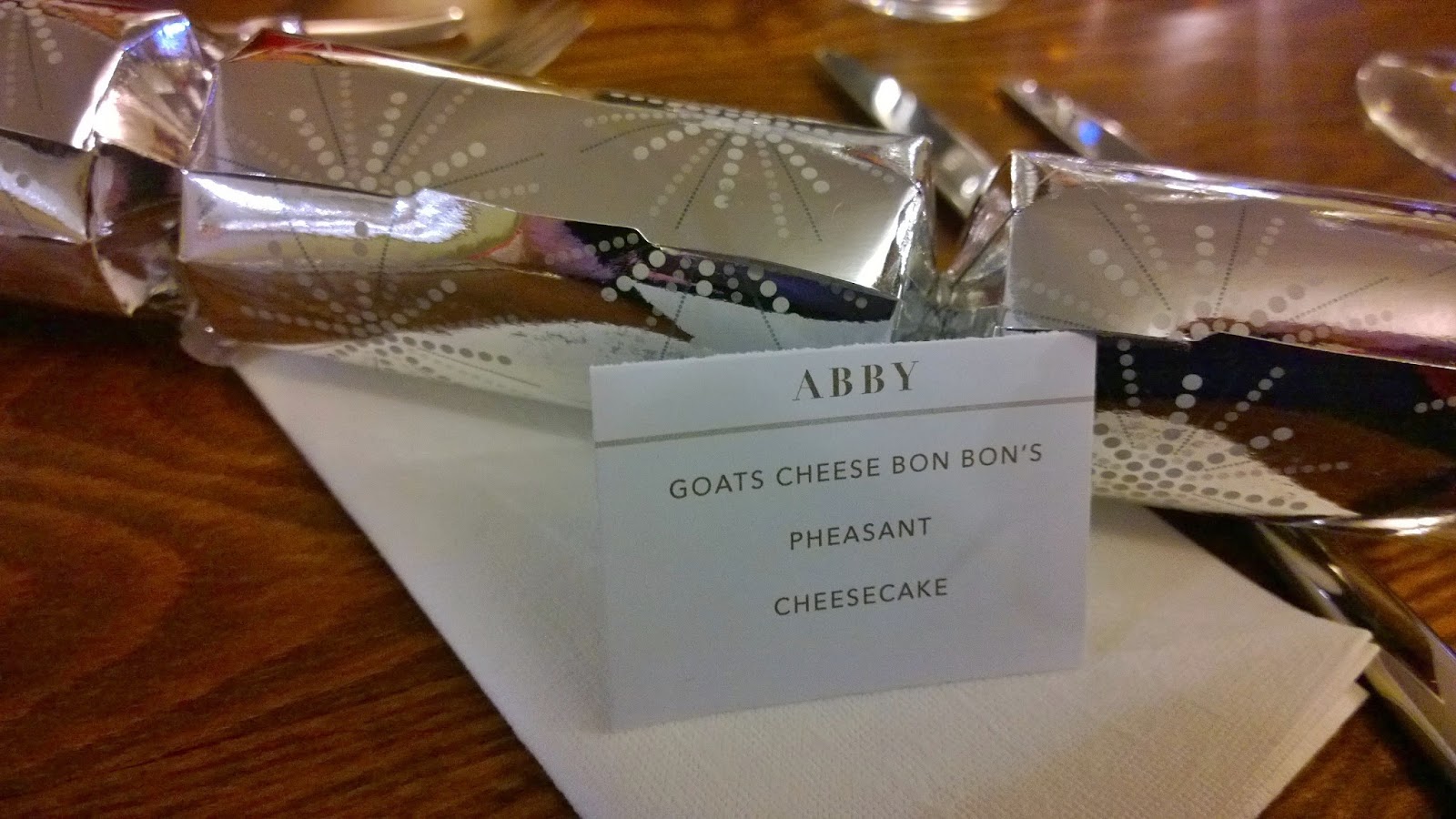 We began with some little canapés a creamy parmesan crisp which melted in the mouth and a fresh anchovy and cavier on a crunchy mini bruschetta. The risotto was beautifully smooth with that little bite you look for in a risotto. The sharpness of the goats cheese was pitched just right, a great starter. It only gave me the appetite for more, which is a good thing. 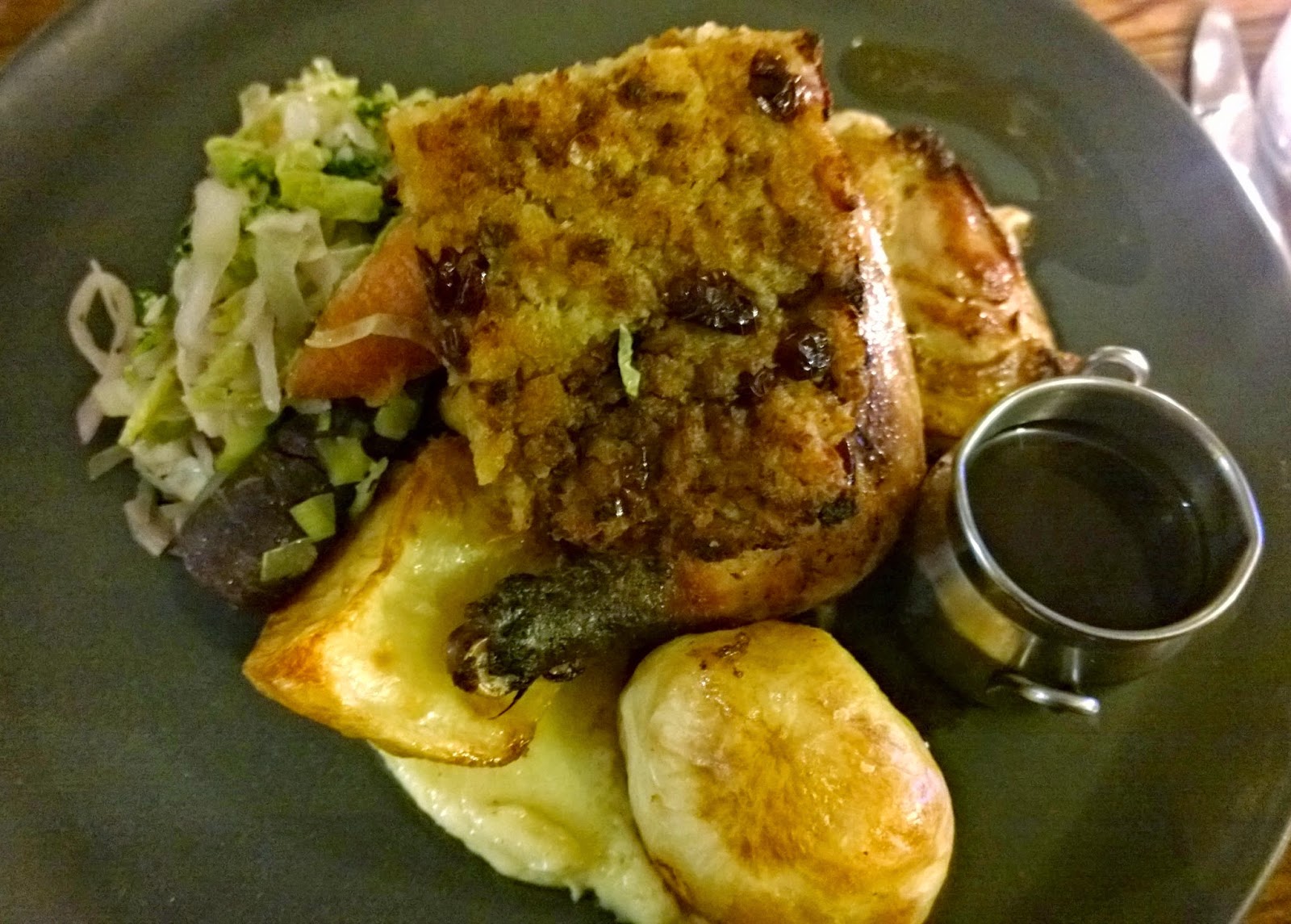 Served with a shot of red wine jelly I had a feeling that this pheasant dish was going to be something rather special. Pheasant is not something I eat a lot of but I wanted to go for something a bit different from roast beef or lamb and this hit the spot. The sausage and cranberry stuffing was exactly how I like my festive stuffing, meaty and lots of flavour, stuffing should not be just an after thought. The portion of meat was huge and the roasties fluffy and crispy. I could go on about the parsnip pureé and smooth gravy also but I think you get the general idea.  Basically if their Sunday roasts are as good as this was get down to the Navy Volunteer immediately, a genuinely good roast, and I never go out for roasts as I am often very disappointed.


In what looked a bit like a sea of beige and olive green the pudding arrived. A whipped apple, cinnamon and brandy cheesecake. This was again very good, quite rich, as all good puddings are. I couldn't taste the brandy much but I didn't mind this was an excellent dessert and a perfect ending to a wonderful meal.


I don't want to pat myself on the back for booking such a successful work Christmas lunch but I think I do deserve it a little. I cannot wait to take Rich for a roast or dinner here, this pub offers some superb food and the service we experienced was friendly, intuitive and made the meal even more special. If you haven't already been to the Royal Navy Volunteer, what are you waiting for?  To find out what else they have to offer, check out their website.
Posted by Abby and Rich at 11:28