I only started cooking roasts when I moved to Bristol about four years ago, and very infrequent their occurrence was. When I first attempted one it was purely on the remembered knowledge of watching and helping my mum when she cooked them for the family. Our family were never one for roasts every Sunday however, it was more a once maybe every 6-8 weeks and only as a treat.

Easter Sunday I decided to bite the bullet and actually roast some lamb. Adding to the pressure I decided to invite my parents over to our tiny flat to dine with us. Mum is a wonderful cook and has never found any recipe too daunting so I wanted to do great job for her. I bought a medium boneless rolled shoulder joint and a small one incase it wasn't enough, I am terrible at judging quantities and as my mum says "It is better to have too much than too little", which is a mantra I've also adopted when cooking for people.

With some garlic cloves, thyme, salt, pepper and rosemary 'borrowed' from the nearest available garden source I speared holes in the shoulder and stuffed them with shards of garlic and rosemary. With a rub of olive oil we were in business. I said a quick prayer whilst they went in and got on with the prep for the rest of the roast. I made sure I staggered the cooking times of both joints so the second one went in after 45 mins. Halfway through the cooking time I splashed some red wine in the dish to keep the lamb from drying out. 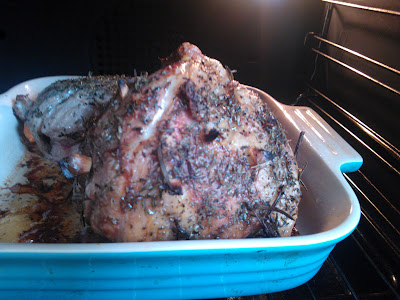 The rest of the roast came together like clock work, my roast potatoes have now been crowned better than mum's, by mum herself no less. Success! Either way I was fairly pleased with the flavour of the lamb but it needed less cooking than I had been instructed, so although the meat was moist and full of flavour I would have liked it to be pinker. The gravy I served with it was red wine, stock and meat juices reduction with some red currant jelly and mint sauce spooned into the mix. 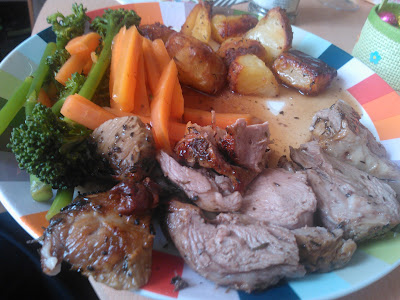 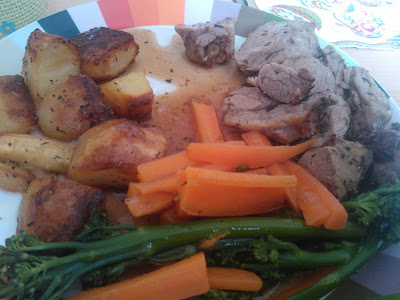 The best reward was how much everyone enjoyed their meal I was feeling the glowy buzz of doing everyone proud. Mum brought over a lovely forest fruit and apple oat crumble which was the perfect end to a lazy Sunday roast. I am definitely keen to cook lamb a bit more often as when cooked right it is a wonderful meat. Hopefully I have given you all some thought for your Sunday lunch times. Next blog post will be my trip to Masa Japanese restaurant.
Posted by Abby and Rich at 11:56