Rich gives the low down on our blogger meet up trip to newly opened Atomic Burger on Gloucester Road.

Atomic Burger is another in the growing field of 'gourmet burger' restaurants, with this particular addition having started in Oxford, and now with a new branch opening its doors in Bristol. What sets Atomic Burger aside from the competitors however is that it is going for a definite different angle, and this time that angle is fun. And it works. As soon as you're within ten feet of the restaurant you'll be struck by the sheer amount of sci-fi, 80's TV series', kids cartoons and other nostalgic fun stuff plastering the walls and decorating the ceilings. The big kid in you will love it. It doesn't stop there either. The huge array of delicious sounding burgers are given great names, including the Chuck Norris, the Dolly Parton, the Johnny Cash, and the Smokey And The Bandit, and everything just gives across a really enjoyable vibe. 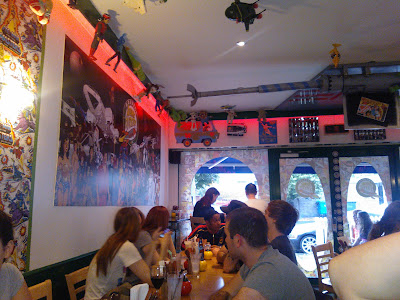 The staff in Atomic Burger are incredibly friendly, very helpful and almost a rarity for such a venue, actually know about everything on the menu and will do anything they can to accommodate you. If you were going to judge a place entirely on the staff, then this place gets a 9 out of 10. The selection of drinks is good too, offering all the usual, but also adding root beer to the mix (which I tried, but to me still tastes like mouthwash and coke), some great milkshakes and some classic American beers.

But we weren't here for any of these. No, we were here for the food. And aside from burgers there are some nice starters on offer. We ordered the tater tots (potato croquettes wrapped in bacon, smothered in cheese and covered in jalapenos) and some cajun buffalo wings. The buffalo wings here come in a selection of nine different flavours, starting at plain, then cooked in maple syrup, then going hotter and spicier right up to covered in ghost chilli, and they look great. Our cajun ones never arrived sadly, but a dining companion had the maple syrup ones which were just delicious, and best of all even if you order just the smallest size you still get a decent number of them (in this case £5 for 10).
The tater tots though were a little disappointing. Potato croquettes, bacon, cheese and jalapeno - what's not to like? And yet, they just tasted a little bland and uninteresting. The jalapenos were surprisingly peppy, but the cheese and the croquettes were really very by-the-numbers. So starters a bit of a mixed bag, and taken just at mine and Abby's order, not very good at all. Two starters, one disappointing, and one failing to make an appearance. Sheer joy at the Star Wars toys and by now four beers kept me buoyant and looking forward to the main event.

Abby's main event, after much indecision, turned out to be The Jake & Elwood (that's The blues Brothers to those not in the know) - a beef burger covered in blue cheese, bacon and onions, although Abby was happily able to substitute her onion for onion rings. My main after even greater indecision (after a week of thought I'd settled on four) was The Mel Brooks - beef covered in thinly sliced salt beef, Swiss cheese, thousand island sauce and gherkin. Both sound delicious and have me salivating even just at the thought of it right now.

There was a fair amount of salivating too, as things took quite a while longer to arrive than we hoped I guess because we were a big group. They were even turning other customers away, the rest of the restaurant was full, news had clearly travelled extremely fast.

Abby's burger she described as not being meaty enough, whether that was down to it arriving well done or lack of seasoning I am not sure, there was also hardly any blue cheese. The onion rings however were described as really delicious and very crunchy.
My Mel Brooks burger then. Hit and miss, but definitely more hit. The burger itself was more well-done that I'd have liked (or indeed ordered) but was tasty and chewy, and the salt beef on top (basically a whole pack of pastrami) was a brilliant and tasty topping. The thousand island sauce worked a treat too, especially when alongside the Swiss cheese, and with the gherkin it as almost a perfect taste sensation.But it wasn't perfect though.

Aside from the overdone burger, the sauce on top was too sparse and every now and then you'd get a bite where there just wasn't any at all, and that was massively disappointing. Bizarrely too rather than slice the tomato and gherkin that comes in your burger, everything comes in cubes and chunks. This means that as soon as you have bite number one half the burger salad falls out onto the plate. Also I'm a traditionalist - I like my gherkin sliced thanks.

Another annoyance, and one that was shared with a lot of our other dining friends, was the actual bun used for the burgers. Some people didn't like the texture and feel of the bun, saying it felt and tasted cheap, while our gluten free friends said their non-gluten buns were great. And while I agree, my biggest problem with the bun was just how quickly the thing disintegrated in my hands. After only having had one-third of the burger, things got a bit sloppy and very messy.

There are two types of fries you can order at Atomic Burger, standard and Sci Fries. Both are double fried with skin on but the Sci Fries have a chilli rub on them. We both ordered the Sci Fries and Abby in particular loved them, they were crunchy and with a slow gentle heat behind them, best fries she'd had in a while.

My first time at Atomic Burger then was a bit of a mixed bag. The staff were brilliant and some of the food was very good indeed. But while it's a new place, so some things can be put down to teething troubles, it really was a combination of some things being done really well, and others failing horribly. Some bland food, skimping on some of the dressings, the cheapest quality buns, and a missing starter really brought down the whole meal.
And as much as I had a good time with the party we had with us, and all the interesting talking points (a video of the terrible 1970's Spiderman was hilariously great) we went for an awesome burger, and well, it wasn't. And I was pretty disappointed - pretty much like the kid who wanted a Super Nintendo for Christmas, but instead ended up with an Amstrad. I've heard other people have better experiences, and others have worse, so maybe things will improve. I really hope they do, as the place has the potential and I really really wanted to like it, but I didn't.

My go to burger still remains The Burger Joint, which benefits from having excellent food, good service, decent prices and the brilliant Sara (possibly the greatest waitress ever, certainly the only one who brightens your day by just saying hello). Also, their burgers don't turn to mush in your hands. I'd definitely give Atomic Burger another chance too, further down the line when they are a bit more established. To view all the choices Atomic Burger has to offer visit their website.

To get a gluten free perspective of our visit check out Wuthering Bites' review.
Posted by Abby and Rich at 11:34