Thursday evening the temperature had dropped, heading ever so closer to the minuses of December. Rich and I headed to Las Iguanas for dinner, having been invited to check out what they had done with the place. Las Iguanas, a business that started in Bristol to much success, reaching almost 30 restaurants around the country. They have revamped the original Whiteladies branch as Clifton Cocina, a place where they return to their roots and go about testing new dishes, you can expect more specials and basically it's a bit more experimental. 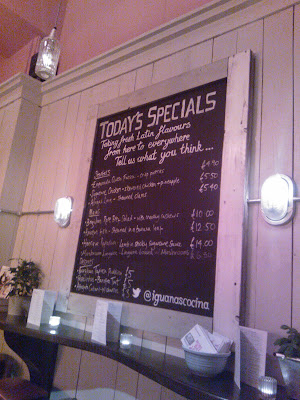 Honestly Las Iguanas beforehand had never really been my favourite chain restaurant so it was not one I visited very often before, but I am happy to report this change to Clifton Cocina has definitely been for the better. With a more condensed but ever changing menu it has given a more independent and personal touch. We started off with some dark and stormy cocktails, a personal favourite, cannot resist anything ginger based, served in jar type glasses which I absolutely fell in love with.
The restaurant was pretty steady for a Thursday evening, which was encouraging and with the samba music playing softly across the room it gave the place a really nice warm atmosphere. Rich and I chose honey peri peri chicken wings and calamari for our starters and happily sipped at our cocktails whilst we waited.
The calamari were some of the best I've had in a while, coated in cassava, or tapioca to you and me, it was light and crunchy whilst the squid was soft but not rubbery or chewy. The chicken wings were fairly meaty and the sauce was sweet but also had a slight kick and a zingyness. Not quite as good as the chicken wings they serve in the newly located Burger Joint, nothing can top those, but they were very tasty indeed.  For our mains I picked bahia moqueca, a thick spicy sauce with tomato and coconut which I chose to have with white fish and peeled prawns, whilst Rich went for steak fajitas and a side order of patatas bravas.
I rarely order fish out, and this time I fancied trying something I normally wouldn't think to. I was pleasantly surprised by the bahia moqueca, the fish was not overcooked and the spices were subtle but blended nicely. Having the finely milled dried coconut to sprinkle on top was a nice touch and added some extra texture. My only gripe is that the prawns were a bit chewy, the surprise appearance of crayfish saved this, I think possibly they should consider substituting all the prawns for crayfish in the future as it worked better with the sauce and texture of the fish, in my opinion.

The steak in the fajitas was extremely plentiful and well flavoured plus it was cooked rare as requested, we didn't really need the patatas side order, but they had a nice heat to them and are always a favourite. By this point we were pretty full but we checked out the dessert menu anyway.  The special dessert paselinhos (or banoffee tart) sounded too good to skip so I ordered it and Rich went for an affogato which came with a couple of churros on the side. The tart arrived with a little face on it, unfortunately the pastry was a bit too thick and dry and the filling not quite up to scratch so I left most of it. The crowning glory here was the banana flavoured ice cream, a rare flavour indeed but a treat if you can get it. Rich's affogato had a scoop of toffee ice cream and it was highly praised.
All in all Clifton Cocina has really upped it's game I was impressed with the standard of food and service. Jimmy, who runs the show here, knows his stuff and his enthusiasm and cheer was infectious. I am looking forward to seeing what new dishes unfold over the upcoming months.

As invited guests of Las Iguanas Clifton Cocina our meal was complimentary but as usual I was not influenced by what to write.