Each year I carve a small pumpkin for Halloween and each year I let it glow for too many days and then end up having to throw it out. Not this year though, this year I was determined to make something of my spooky orange friend. One of my Twitter followers sent me an amazing recipe from the Riverford website for a Mexican style pumpkin soup full of beans and spices, topped with crunchy tortilla chips, check the recipe out here. Unfortunately the mini supermarket on my route home was lacking in the ingredients I required so I quickly changed tactics and made up a recipe to try in my head. 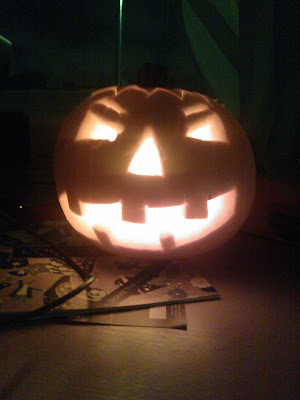 After chopping the pumpkin into chunks I popped it in a roasting tin and drizzled some olive oil over it as well as sprinkling over paprika, cumin and chilli powder, plus some fresh thyme for measure. I roasted it for about 20 minutes until the skin underneath was starting to wrinkle up. The lovely darkening orange of the pumpkin after cooking is pure Autumn. I let it cool in the tin for 10 minutes then peeled off all the skin.
Whilst the pumpkin was cooling I fried a small diced onion plus 2 cloves of garlic and once that was softened added two thirds of a pack of smoked bacon lardons. I then added almost 2 pints of vegetable stock, although chicken would have worked too, it was just what I found first in the cupboard, and popped the pumpkin back in. I added 2 teaspoons of chipotle paste, chilli flakes, cayenne pepper and more paprika and cumin and let it cook down for 15 minutes or so. Meanwhile I fried the rest of the lardons until they were crispy and then I added a couple of table spoons of pouring cream before blitzing the soup with my hand blender. I served the crispy lardons on top of the soup before finishing with a dash of cream on top.
My Australian friend Kathryn, now residing in London, asked me a few months ago whether our supermarkets tend to stock pumpkins any other time than Halloween like they do in Australia. As far as we have found the end of October is the only time you can get them. It is a shame as this soup had a real warming kick but with a smoky edge that was soften by the cream, I will try it with squash but can't help but feel it might be a bit too sweet. Pumpkins throughout Autumn is what I say!