Last Friday night some of our Jolates class, best pilates class in town by the way, decided after a hard workout we would go sample the barbecue offerings of the newly opened Grillstock Smokehouse on the Triangle,  residing next door to Mbargo. Alas this was not to be, as you cannot book space at Grillstock, everyone in Bristol had decided this was the place to have dinner that night. After heading over at 7.30 and waiting for about 20 minutes in a large queue we carried on with another drink at the Brass Pig and then tried Grillstock a final time at 9pm only to find that it was still busy and everything bar pulled pork and burgers had sold out. Slightly deflated I suggested we take a trip to nearby YoYo burger for a mini meat fix. This is not a blog on YoYo, although I highly recommend their burgers they do a great number of burger combos and they are my second favourite burger in Bristol after The Burger Joint. 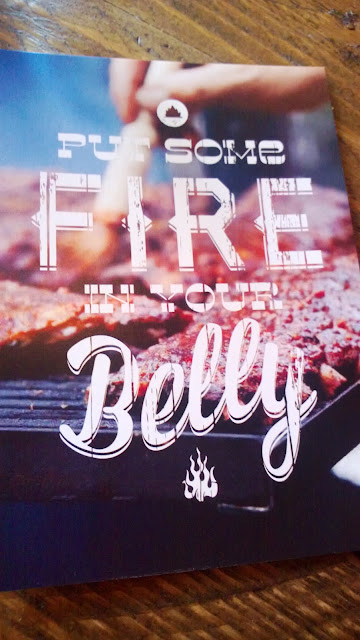 The next day Rich decided he could wait no longer to sample the barbecued delights of Grillstock so early lunch time we decided, on the off chance, to try and see there was space for us. With fingers and toes crossed we left the confines of our flat and out into the heat of the midday sun, well you know what they say about mad dogs and Englishmen. We were in luck, Grillstock was actually relatively quiet so with our excitement levels at maximum we took a couple of stools at the long wooden bench. We did toy with the idea of getting a burger but felt it was a bit of a cop out and for our first visit wanted the full meat experience so we could taste all the flavours without bread getting in the way, although after seeing the burgers upclose across the table I may be tempted to go for one next time.

I decided to go for the half rack of babyback ribs which comes with fries, coleslaw, corn bread and small side sample of sausage chunks plus a side portion of burnt ends for Rich and I to share. Yes you can order meat as a side dish, even their beans come with meat in them. Rich went for the Smokehouse Special, three barbecue meats of your choice plus the sides listed above, minus the sausage sample. Rich chose a half rack of ribs, brisket and pulled pork, which obviously meant that I got to try more meats too. 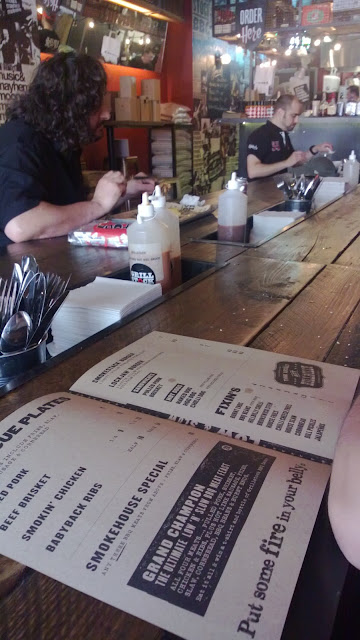 I think what I like particularly about Grillstock is that it does almost transport you to a roadside cafe in America. The music they were playing was Texas Blues, Rich's favourite Blues subgenre, artists such as Stevie Ray Vaughan, T-Bone Walker, and Johnny Copeland that sort of grimy sweaty blues with sharp cutting bluesy guitar licks, it's all about the little touches that made it feel right. The right music can evoke strong feelings about a place and this was bang on, whilst we were waiting for our barbecue we got right in the moment with the music.
Ribs are my secret love in barbecue food, I always used to beg mum to add these to our standard barbecue items of chicken, sausages and burgers. I don't what it is about them, I think it's that you have to work for your reward when you eat them, and because sometimes I like a challenge. Either way these were the best ribs I have ever tasted. Fully meaty, sticky and sweet I could eat these any day of the week. The burnt ends were also really awesome, smoky, also with a small kick, I couldn't eat a whole pot myself as they were incredibly rich which is just as well that we shared ours. Even the fries were great they were crunchy and well seasoned, quite often fries can be forgotten about in favour of the meat  but these were really delicious. The coleslaw alone deserves a mention, not too bogged down with mayonnaise and a nice tang from the mustard it worked well with cutting through the rich meatiness.

Rich's meat mountain was pretty epic, although admittedly not the most epic choice on the menu, there is a Man vs Food style challenge called the Grand Champion where for your efforts you could win a t-shirt and a bottle of Grillstock sauce if you manage to polish it all off yourself. Not something I could do but I know there are plenty of meat fanatics out there that are more than up to the challenge. The pulled pork was juicy and beautifully cooked, we have managed to make this on a few occasions at home and it is definitely a favourite. The only slight let down was the brisket, a meat that can be dry due to the cut, the flavour was nice but was a little dry for me but I did enjoy the pink smoke ring round the edge it was extremely tasty. 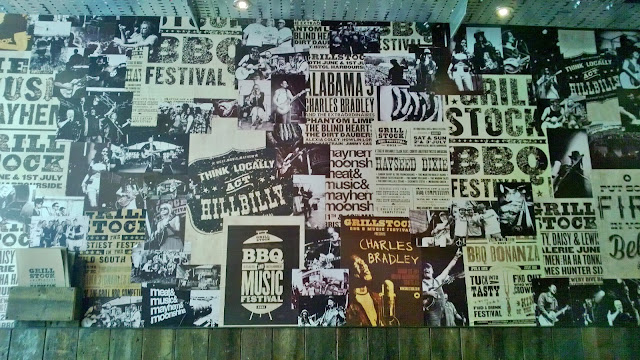 So basically if you like good quality barbecue food head to Grillstock, although by the looks of the queues most people already are there. The only thing they need to watch are their stock levels as when Rich went in again on Tuesday evening this week they had run out of a lot of the drinks, but this is something that I imagine will come with time. This is a very popular venue so head there at unpopular times to ensure a seat at the meatiest table in town. Check out their website for details on the Grillstock festival, all their wares and the opportunity to sign up for meaty updates.

Rich and I are off on holiday on Sunday to Valencia for a week I shall do a mini photo post before I go though hopefully and then when I am back I can report on all things Spanish and Tapas related.
Posted by Abby and Rich at 12:19