In the last month Bristol has finally been able to welcome Meatliquor to it's streets. A launch that was heavily hampered by delays of licensing suspended opening it's doors for over a year. But now finally dirty burgers plus liquor have descended from London and they are ours for the taking. We were invited to the launch of Meatliquor the other week to sample their cuisine although it wasn't the first time I had visited. The first week there was a soft launch and one week day lunch time we headed down there to see what was what. 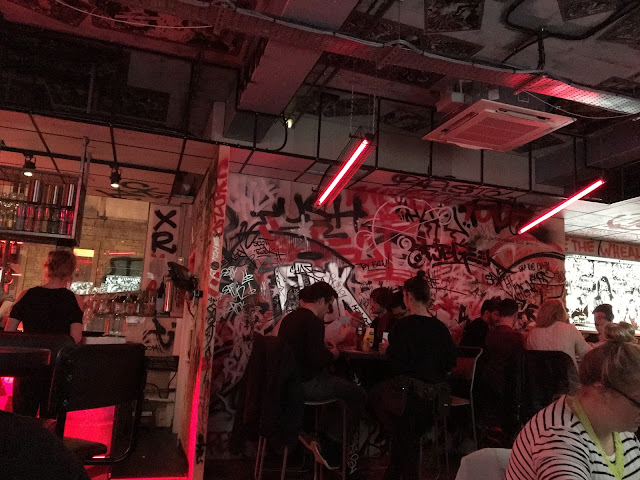 I personally find the decor in the day time a touch depressing and real, sometimes feels a bit like eating in a car park.  At night it seems a bit better, the neon red strips, a nod to the previous incarnation of the space, Dynamic Heating Services, soften the stark concrete pillars. The first Meatliquor I visited was the Brighton branch and the decor there is the stuff straight out of a Terry Gilliam film or a brothel in Blade Runner. Neon clowns, industrial metal tables, things to catch the eye everywhere, it is completely fantastical. I know the Bristol branch was looking to fit in with it's new home of Stokes Croft but to me it feels a little less magical and a bit too gritty. Although I really liked the light boxes filled with weird and wonderful etching styled pictures. 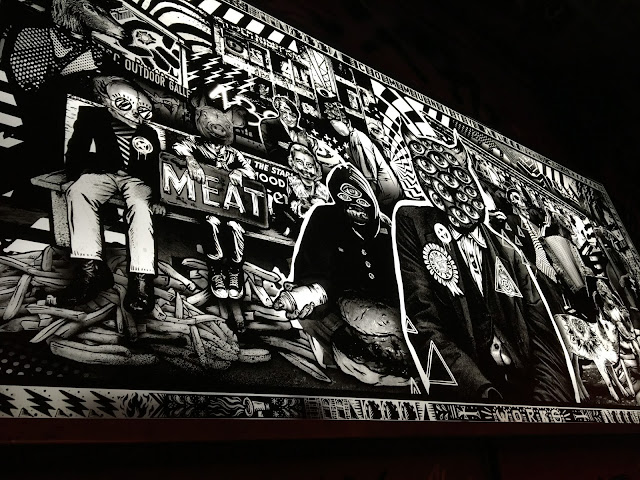 As for the food, this is a place to pig out so come hungry, hungover or both. What is a nice touch is they tailor each menu to include some dishes that reflect it's location. So Bristol has extended vegetarian and vegan options. On launch night I decided to try their buffalo chicken burger, chicken covered in hot pepper sauce, lettuce, onions and blue cheese sauce. Rich had the bacon cheeseburger and we shared some fries and sampled the xmac & cheese, deep fried camembert and stilton macaroni cheese logs with port and cranberry dipping sauce. On our first visit however I tried the deep fried pickles and the dead hippie burger, their signature burger.

As expected they have local beer from Wild Beer, a Bibble, and Rich sampled two cans. I was happily recommended their signature cocktail St Lawrence; Bulleit rye shaken with maple syrup, fresh lemon juice a dash of bitters and a twist of orange. It was really great, a wonderfully balanced cocktail very much recommended. 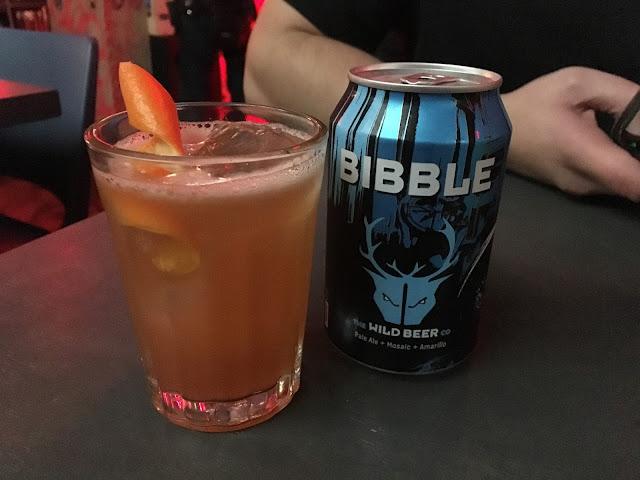 All of the food came on one tray but we decided to tackle the xmac & cheese first because we were really hungry, purposefully saving ourselves for a feast. These were seriously dirty food, pretty stodgy but that was only to be expected. I could have done with a little more stilton flavour coming through because they were a little bland to what I was expecting. But they were very rich so the port and cranberry sauce was well matched and needed. If you are looking for a side from their normal menu, first time round we sampled the deep fried pickles with blue cheese dip. These are seriously good, a great crunch on the batter which is crucial, no one wants a soggy batter. The dip could have been more blue but again I am a blue cheese obsessive. 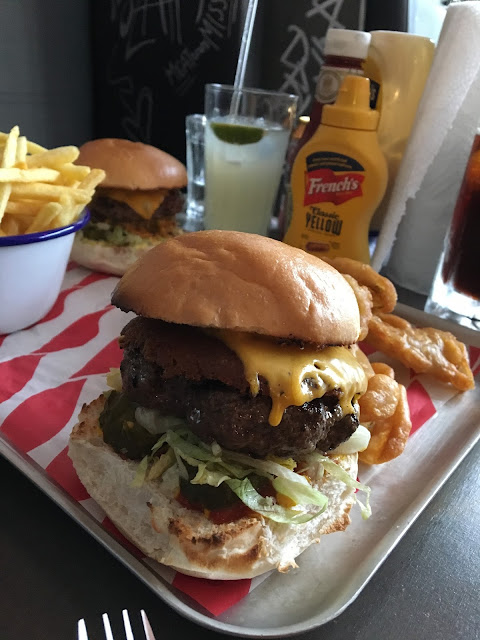 On to the burgers. The buffalo chicken burger was spicy, but enjoyably so. The rich blue cheese sauce helped temper it down a bit. I enjoyed this burger it was just very intense, the flavours are so strong they almost punch you in the face, but I would have it again if I didn't fancy any of the beef ones. The beef burgers are cooked pink, as they should be. Rich found his bacon cheese pretty tasty although they use a bacon patty instead of rashers which is a bit different. The chips were a big enough portion to share between the two of us. The dead hippie burger which I sampled first time round, two patties fried in American mustard, cheese and dead hippie sauce is rather good, and offers something a little different.

Meatliquor is good, but had it opened a year or two ago when it was supposed to it might have been in my top 3 burgers but unfortunately, or fortunately, Bristol has an embarrassment of riches when it comes to burgers. My top three, as it stands are Burger Joint, Chomp and Three Brothers. These places offer better value for better burgers. Meatliquor is pretty expensive, like Byron before it these London joints have to evaluate their prices for outside the capital. Meatliquor's burgers also like Byron do not come with fries and with drinks prices as they are you could easily spend £30 for a couple of burgers, fries and a side plus non alcoholic drinks. To find out more about Meatliquor check out their website.

The launch night meal was complimentary but did not affect my opinion of the burgers. My first visit I paid as normal.