Pho is a dish that originated in Vietnam traditionally consisting of an aromatic beef or chicken broth with rice noodles, meat, beansprouts and fresh herbs. Usually you’ll find a selection of sauces to mix into your pho for extra flavour and spice. Pho is the healthier relative of ramen. It’s not something I’ve had regular contact with partly because of the expected presence of a great deal of coriander and also the availability of Vietnamese food in Bristol is quite small, but having walked passed Pho a number of times and heard mostly positive things I decided to take a punt.  Kym and I were well over due a catch up so we picked this spot for lunch. Pho is a chain of just over 20, mainly London based, restaurants providing an entirely gluten free menu or options to make gluten free. Most bowls are under £10 so it’s a good place to go on a budget of an evening.

The tables are populated with lots of Pho paraphernalia, fish sauce, pickled chillis, sriracha hot sauce and chilli oil so you can season your Pho to however hot or not you wish.  Wanting to get started on the eating part we made up our minds fairly swiftly I opted for a  Phở tái chín; steak and brisket pho with a starter of crispy squid. Kym meanwhile went for the Phở đặc biệt; prawn, steak and tofu in garlic beef broth plus a starter of spring rolls, with your dip of choice, which in Kym’s case, was satay. 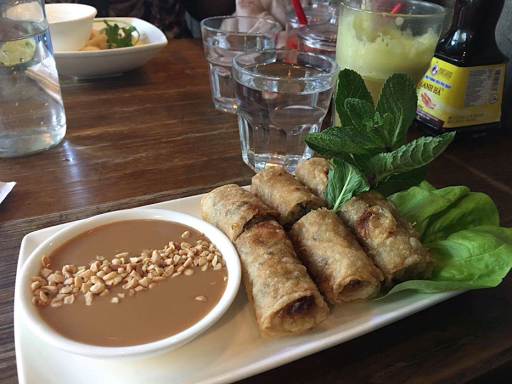 Our starters arrived fairly promptly, which was just as well because we were tipping over into hanger. I was advised to squeeze my lime wedge into a pot of flavoured salt and fresh chilli with a quick mix this was a delightfully fresh dip for the small bites of crispy tempura squid.  Spring rolls are often something that is denied to the gluten free but not at Pho. Crispy rice paper rolls stuffed full of pork and veggies, and a creamy nutty satay dip to compliment them, these were some of the best spring rolls I’ve had in a long time. The portion is generous and will satisfy any craving, gluten free or otherwise. 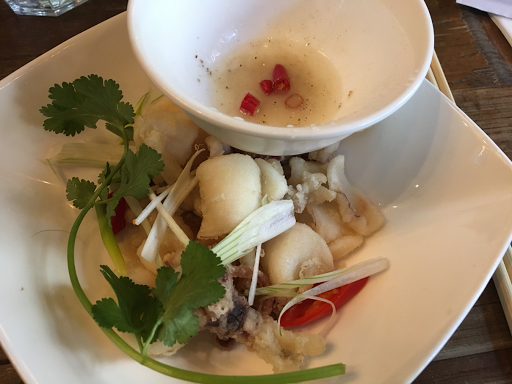 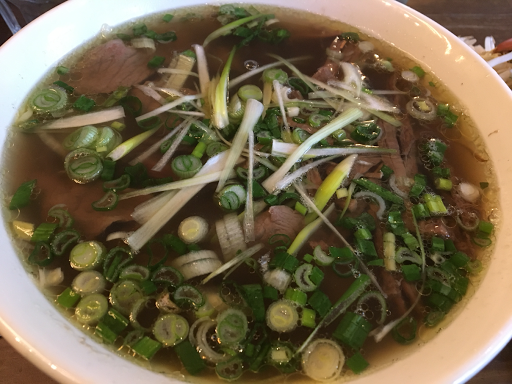 Our Pho arrived after a bit of a wait and two large steaming bowls were set in front of our widening eyes. The herbs, chilli and beansprouts are thoughtfully placed on a plate so you can add as much or as little to your pho as you wish.   As we both like fairly spicy food we added all the chilli and set about sampling most of the aforementioned pho accoutrements so each of our bowls had a delightful kick. I was particularly impressed with the brisket, it was tender and melted in the mouth. The steak wasn’t as full flavoured as the brisket but with the additions I had made to my bowl it didn’t matter too much. I was hugely impressed with the food at Pho. The service was a touch slow and inattentive at times but it wasn’t bad enough to stop me from returning, which I did the following week with Jane after work. 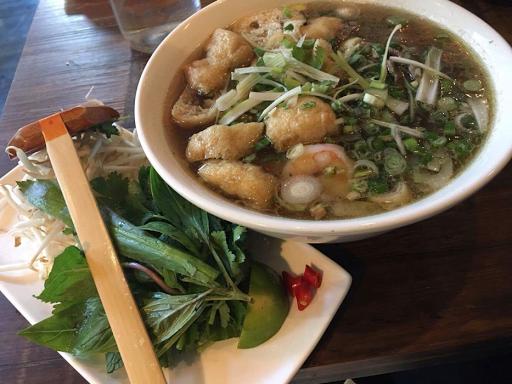 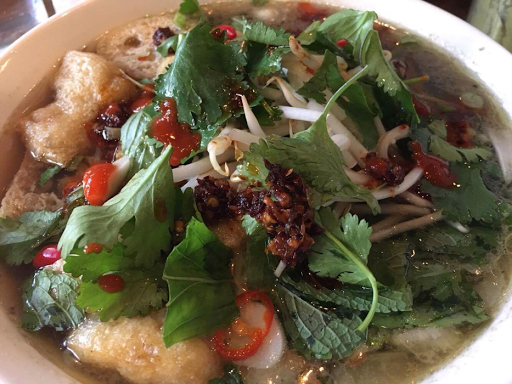 Pho offers something a little different for lunch in the centre. I would hesitate to recommend going in a lunch hour if you have a deadline but if you have enough time to while a way a lazy lunch it’s an excellent option  and I am looking forward to slurping up my next bowl. To find out more about Pho visit their website.