A Sunday Evening at Hotcha

Rich and I visited newly opened Hotcha on Whiteladies, Rich reviews our meal there.


Hotcha is yet another quickly sprung-up Chinese/Pan Asian food venue (we won't call it a restaurant for reasons that will soon become apparent) to occupy space on Whiteladies Road, their first central location being on Baldwin Street a few months back. And when the Sunday food choices came down to either the much touted "NO MSG" Hotcha or the slightly grubbier sounding Bangkok Street Food (which apparently is actually rather good, and we shall be sure to check it out soon), we went with Hotcha. Basically we chose it because of the name. Shallow I know.

Anyway, for those of you who have read our review on Toro Pan Asian (worst meal I've had in years), and the comments that came after, you could neatly summarise Toro as good for everything in the more secondary fields of eating out (decor, service, price, etc) and absolutely terrible for the actual main event, ie. the food. Hotcha then does an inverse flip and serves great food but falls down almost everywhere else. And as a result is clearly the superior choice.

The venue itself is all clean whites, a bit cold and empty perhaps, but it has a certain minimalist charm. It's pretty much laid out like an eat-in takeaway too - seating is all eight-person benches, with a free-for-all array of chopsticks, plastic (yes, plastic) cutlery, napkins and even branded Hotcha mugs, while to order you have to go to the counter and state if you're eating in or out. In itself not a problem, but my personal advice - eat out.

A nice touch is that you can openly see behind the counter all the cooks preparing, cleaning, seasoning and cooking all of the food, and it's nice to see it all being done so freshly and skillfully. Other than that you've really no other reason to eat in. We ordered char siu pork, sweet and sour chicken and rice to share. The food is served with each dish coming in its own plastic takeaway box on a plastic tray, which while keeping the price nice and low is a bit of a naff low-rent way of eating, but the flavour and taste of the food itself is great. 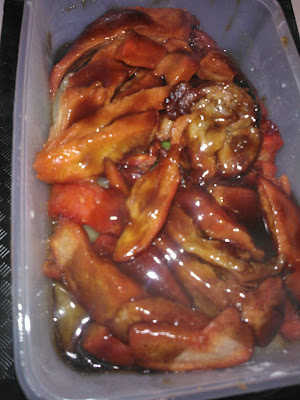 All of the dishes we tried tasted delicious and everything has a nice lightness to it which means that the sometimes heavy, greasy and oily after-taste you so often get with takeaway is not there and instead you just get a nice feeling of clean tasting freshness of what you've just eaten. Also worth mentioning is that the food boxes all come full of meat and there's no filler in there. So often you'll order a few dishes and a lot of it will be padded out with beanshoots or random other cheap padding, and thankfully Hotcha avoids this route. Each of our main options just came stuffed with the good stuff. 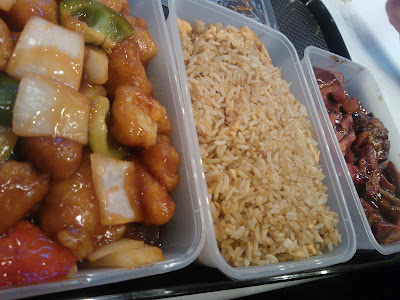 A few other notable eyebrow raisers included the very poor quality of the chopsticks on offer, and also the air con. The first pair of disposable chopsticks I went for had a number of splits and massive splinters, so I went for a second pair, which in turn looked like they might spontaneously disintegrate in my hands at any moment. Luckily set no. 3 was absolutely fine. Bad luck of the draw? Perhaps, but generally the disposables I've had in Wagamama, Beijing Bistro, Obento and countless others have been much better looking and felt less rough. My advice, use the plastic forks. And the air con, what about the air con. Yes technically we're in the Spring/Summer crossover now (no it's true, we really are) and granted the cooking staff may be quite warm slaving over the hot woks and pans, but the dining area itself was freezing. Simply put, no-one in there was eating with their jacket off. Luckily the food was so pipingly hot, it helped to fight off the bone-chilling cold air quite substantially.

So where does Hotcha stand then? Venue - basic, Service - perfunctory. Price - very good. Food - great. If you want to try a new Chinese takeaway then Hotcha fills a nice gap in the market (in that good Chinese take-outs aren't quite yet completely saturating the market, unlike the dozens of curry options out there), with good food at a good price. But if you're looking to eat at an actual Chinese venue, then don't bother. Unless you want that authentic eating-like-a-student-but-not-quite-as-comfortable experience.  To view Hotcha's menu visit their website.
Posted by Abby and Rich at 11:27