A Thursday Night Out at Bistro Biere (now closed)

It was an extremely rainy Thursday evening in Bristol, the British Summer we have grown to expect, and we were dodging the raindrops to meet our friend Claire at the recently renamed Bistro Biere, or The Clifton Kitchen as was. We were the only customers for about half an hour then it really started to fill up, this place was popular possibly because Monday-Thursday you can get 3 courses for £20 which is a real steal, plus you can bring your own bottle, for a corkage charge.

Rich ordered us a bottle of Prosecco, it had been a crap day with rubbish weather so a little sparkle always cheers. The light in restaurant was low and lots of candles dotted about made it a really relaxing atmosphere, perfect for an impromptu romantic evening. 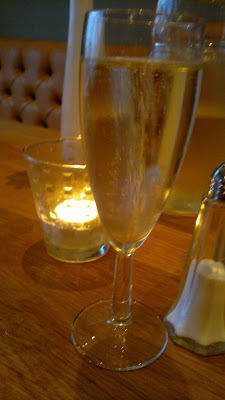 We all thought in such bad weather to go for all three courses, comforting ourselves with food it didn't take me long to decide what to choose. The menu consisted of about 4 choices for each course which certainly helps me decide quicker, large amounts of choice on a menu tends to make me extremely indecisive. I went for wild mushrooms on toast with a poached egg and smoked salmon. Mushrooms, particularly wild ones, are a bit of a weakness. Claire chose Coquille St. Jacques and Rich a duck pate.
Got to say the food really knocked me for six I wasn't sure what to expect but it was really delicious. Those mushrooms were fragrant and full of flavour and Claire's coquille was creamy, rich and melted in the mouth, perfection. Claire and I both went for the guinea fowl for our main because we'd never had it before and it came with more mushrooms, what can I say I am obsessed with good mushrooms. Rich opted for the steak and frites, which was going to be my second choice, being the steak fanatic I am.

The sauce on our guinea fowl was wonderful, really complimented the meat. The guinea fowl itself, though well cooked, it wasn't astounding enough a meat to warrant me ordering it again, not quite chicken and not quite duck flavoured enough. I would if faced with guinea fowl on a menu again I would probably bypass it, it was tasty but not quite different enough for me to deviate from duck. Rich's steak was a wonderful piece of meat really naturally full of flavour and cooked to perfection, rare, but the only criticism was that it was a tad over salted but the béarnaise was one of the best I've tasted.

We were all pretty full but you know once you are tempted with the dessert menu it is hard to say no. Normally I would go straight for the crème brûlée but I saw peach crumble with crème anglaise and as you rarely see peach desserts and I love peaches it won me over. Claire meanwhile had the chocolate orange tart and Rich the cheese plate.

I was a little disappointed with my peach crumble, the skins on the peaches were a little tough after being cooked so probably would have been best skinless but the crumble and crème anglaise were some of the best I've had. Claire's chocolate tart was rich and decadent, I definitely wouldn't have been able to manage it myself, but I am not known for my tolerance of sugar, that is Rich's skill. Rich in a change from the usual went for the cheese plate, which was very generous and filling.

It was almost like dining in the home of a friend, albeit one who could make multiple dishes at once, when our glasses of Prosecco or Malbec were in danger of hitting a low point they were topped up. The service was second to none, one lovely man attending to all the tables and he did a superior job, very attentive and detailed. We were impressed. For more information on Bistro Biere visit their website.