Last week was one of celebration, Rich had got a new job, with immediate start, after his first day and after a tough work out at Jolates, we went for curry with friends Claire and Katherine. The Rajmoni is right by the Victoria Rooms a venue that looks rather like a scout hut from the outside but is rather charmingly different on the inside. 'Banquet Night' is every Wednesday which for £10.95 you will get poppadoms with chutney, a starter, main and rice or naan bread. 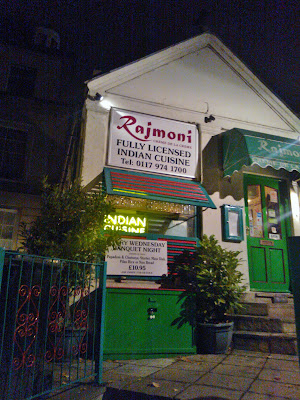 We were seated under a brightly lit table, and given the banquet night menu. The rules are you can order any starter which is priced £3.50 or under and any curry under £8.50 which considering most of the classics are under the £7 mark gives you quite a bit of choice. The poppadoms arrived promptly and we were rather pushed to hurry and order our starter and mains which did seem a little rude, luckily I already knew what I wanted and I was hungry. 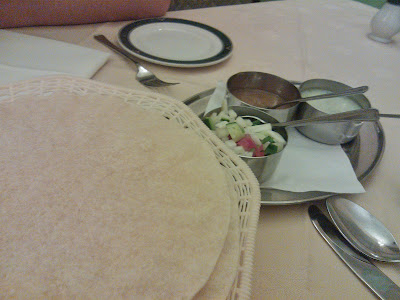 With half of us ordering onion bhajis I went for somosas and Rich the lamb tikka. The bhajis here are enormous you could easily share one portion. They are also some of the best bhajis I have had in Bristol so far. Crispy strips of onion contained with in a spicy batter and the size of a small fist, so if you like bhajis certainly give these ones a try. My somosas were well filled but nothing special, Rich's lamb tikka was fairly small but very well flavoured. I was the partial loser here as far as choosing starters goes.
Recently I have been trying to branch out with my curry ordering, and tonight was no exception, I always tended to order either lamb saag or rogan josh so this time I decided to pick korai lamb, a spicy dish with ginger, chopped onions, pepper and tomatoes served in an iron korai. Rich chose one of his favourites, chicken madras, and Claire and Katherine went for, chicken tikka masala and chang saag ponir respectively. Although when the curries arrived mine was wrong this was swiftly rectified and my sizzling iron korai clad curry came smoking to join the rest of the set.
The lamb in my korai fell apart and was delicately flavoured, I was not expecting quite so much chopped onion but it had been cooked down for a while, and slowly so it was almost caramelised. I am glad I took a chance on something different because I was impressed, my only gripe was that on the menu it is labelled as medium, to me it was not in the least bit spicy, definitely full of flavour, but I was expecting a tiny kick. Rich's madras was pretty hot, although madras' can vary wildly in our personal opinion from one's we have sampled so far. It was a good madras though, a nice building heat softened by the yoghurt giving it a silky creamy texture.
Happy eating sounds hushed the conversation on our table for several minutes. The classic tikka masala was pronounced a perfect partner to Claire's peshwari naan. Vegetarian Katherine's curry was made up of chickpeas, spinach and paneer cheese and looked really comforting and homely. Curry is definitely one of the nicest things to eat when the nights start drawing in and if you find yourself looking for a bargain you can do no better than the Rajmoni. It is not the best curry house in Bristol but it definitely ticks all the boxes for a warming tasty curry, nice surroundings and a good deal. Check out their rather dated website for a browse of the menu.