A Thursday Evening at Be in Bristol

Well I have been officially married two weeks now, it was such a beautiful day. I shall be blogging on wedding and minimoon food at some point, but first  before the big day Jane and I decided to catch up over dinner and picked Be in Bristol on Whiteladies Road to try.  Be in Bristol used to be a bar called The Ranch, which closed a long time before someone decided to re-open it as the aforementioned. Be in Bristol had a huge floor space to fill which is no mean feat, they have decided to entice people in with live music, jumble sales and a very reasonable food menu. 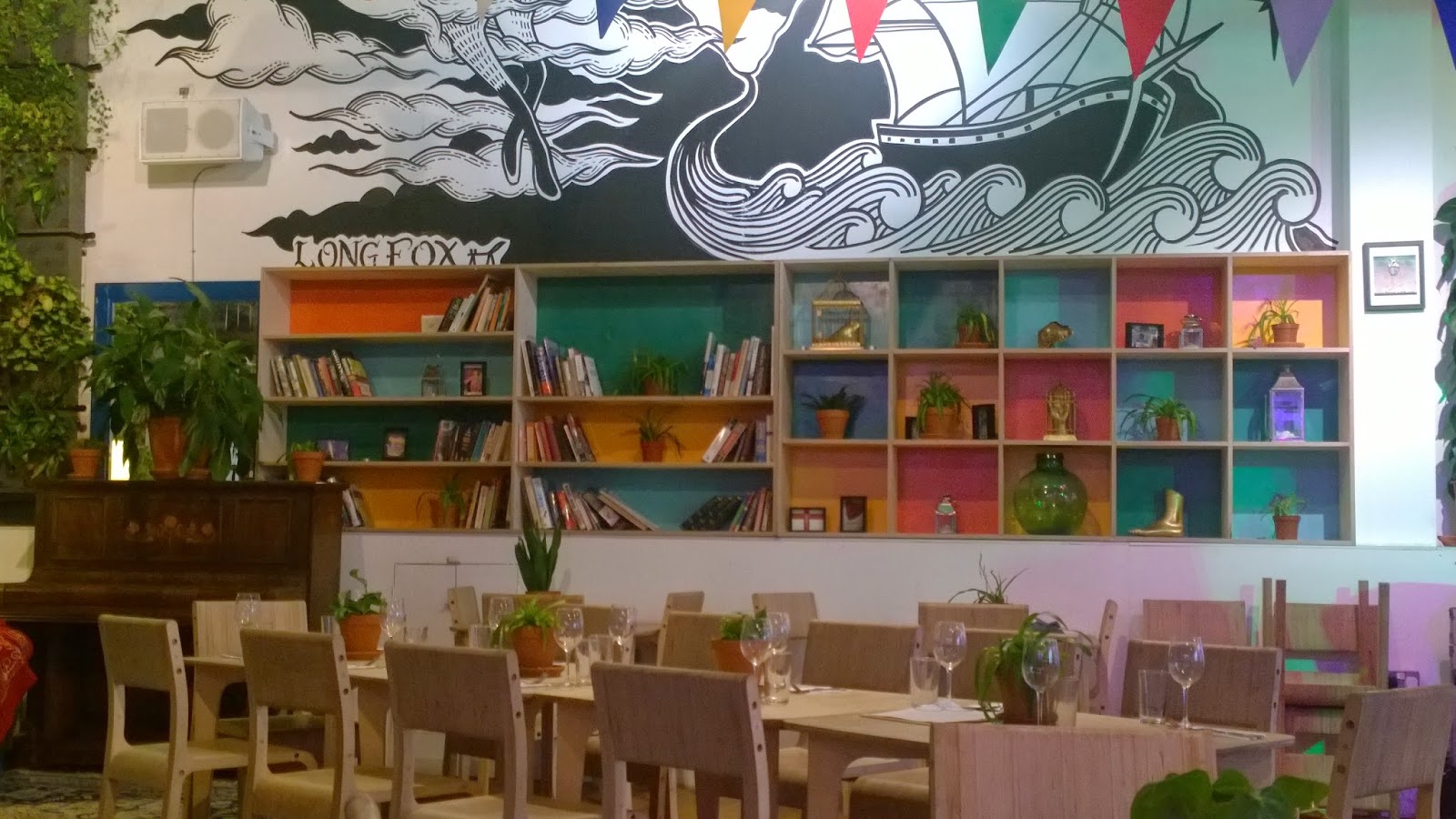 The menu is fairly small but large enough to give you a bit of choice standard burgers, the ubiquitous pulled pork but also mussels and local fish dishes. They pride themselves on locally sourced food, which is mentioned in the menu where possible, which is a nice touch. I scanned the menu and my eye was caught by the roasted butternut squash and goat's cheese pancake stack with dressed salad leaves, whilst Jane went for the fish of the day, which was coley served with samphire, new potatoes and leaves. I also decided to order us a side order of onion rings to share. 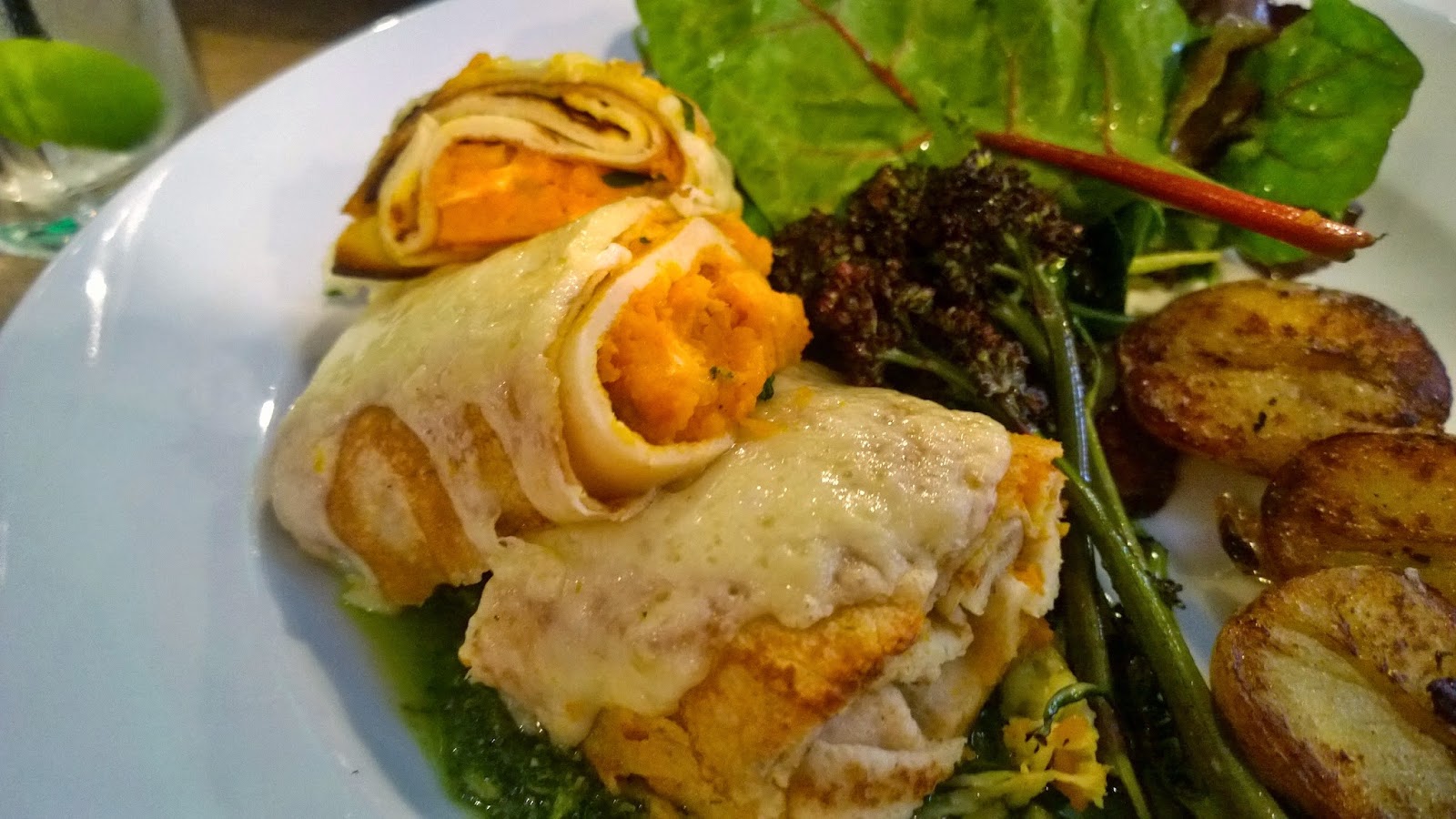 Firstly the portions here are very generous, no main exceeds £8 which is great value. Jane was clearly the winner with her choice, the fish was perfectly cooked with a nice crispy skin and the samphire was actually her favourite part, the saltiness of the capers worked very well. Mine I felt a bit mixed about. The seasoning and flavour of the butternut squash and goats cheese was really nice as were the crispy new potatoes and vegetables. The main gripe was the thickness of the pancakes it certainly wasn't a stack as I had imagined and definitely needed to embrace the French style crepe because this way was too stodgy.

Despite my slight disappointment I was spurred on by how great the onion rings were, seriously some of the best I've ever had. A really well seasoned batter and plenty of them. The only thing I would change is the sweet chili dip that comes with them, it is too thick and too sweet to go with onion rings of such superbness. I definitely will be returning to Be in Bristol because it did shine on a number of things, especially value for money, I would definitely recommend them changing the pancake dish I had though as it was a shame that the texture outweighed the flavours.

Luckily Be in Bristol are also putting on a lot of live music nights, most nights you can find jazz, blues or funk styles floating out of their doors which is a nice extra. If you want to find out more about the events they are putting on or just a look at the menu check out their website.
Posted by Abby and Rich at 11:38

Email ThisBlogThis!Share to TwitterShare to FacebookShare to Pinterest
Labels: Bargain dining in Bristol, Bars on Whiteladies Road, Be In Bristol, Cheap Eats in Bristol, restaurant on whiteladies