Last week we were invited to sample the new Spanish menu and wine matching at Harvey's Cellars. We had not been to Harvey's in over 2 years and felt that it was well worth another trip there. Since our last visit Harvey's adopted a Creole spin to their tapas menu, which is not something I have seen before. However for this visit they wanted us to try out an authentic Spanish menu with wines to match.  What is nice that since our last visit, they have changed a few things and made the decor a bit to make it feel warmer and more welcoming. 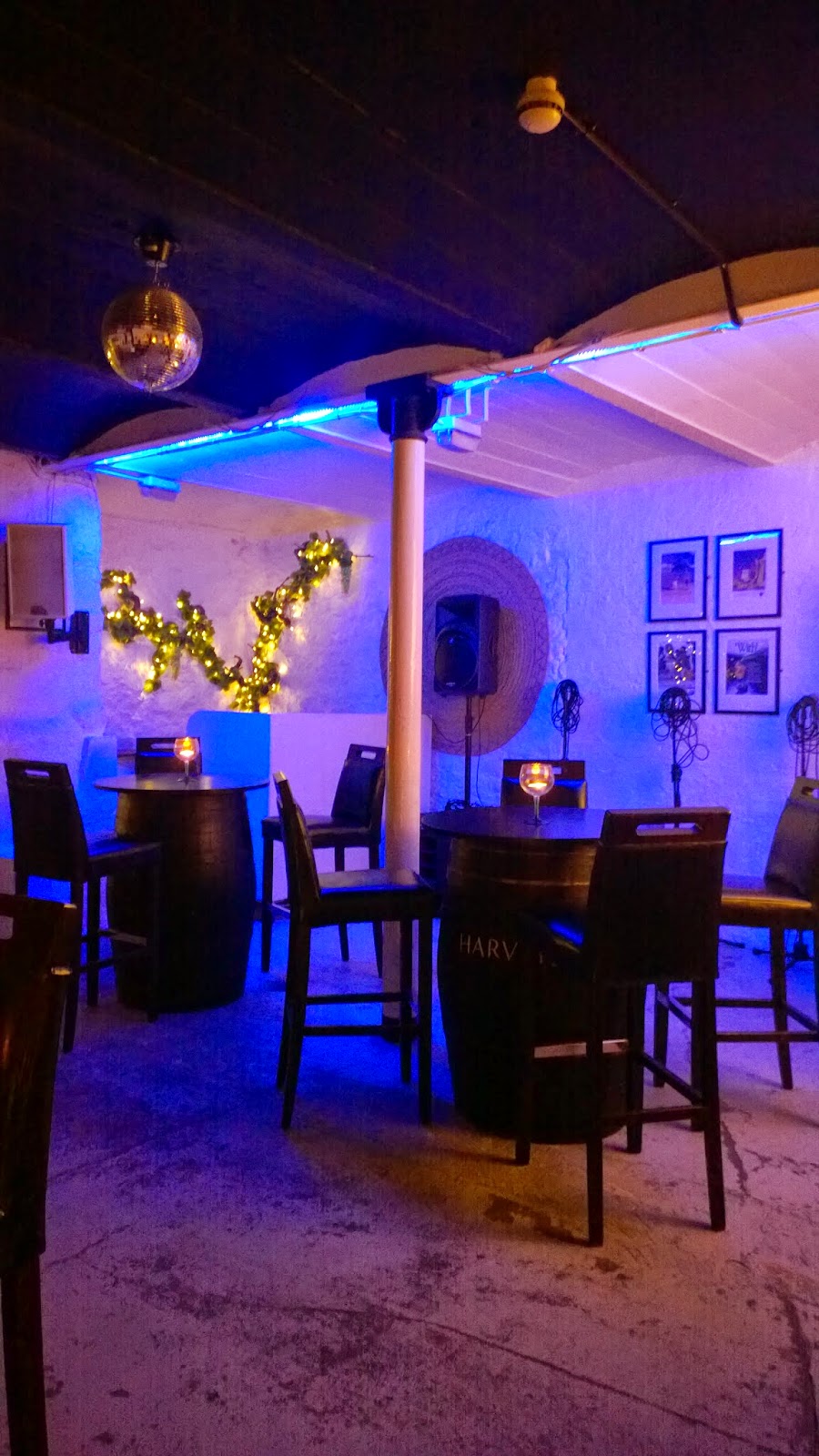 Heading into the back part of Harvey's we sat up to one of the giant barrels.  First we were brought a Bristol cream sherry over ice with a wedge of orange and some imported olives marinated in a closely guarded secret recipe, there was heat, citrus and they were wonderful.  This was closely chased by a selection of cured meats and passata, which was matched with a Macabeo Chardonnay. We were advised by our Spanish guide that spreading passata on the bread then topping with the sliced meat was how they did it in Spain so not one to shun food advice we dived on in. 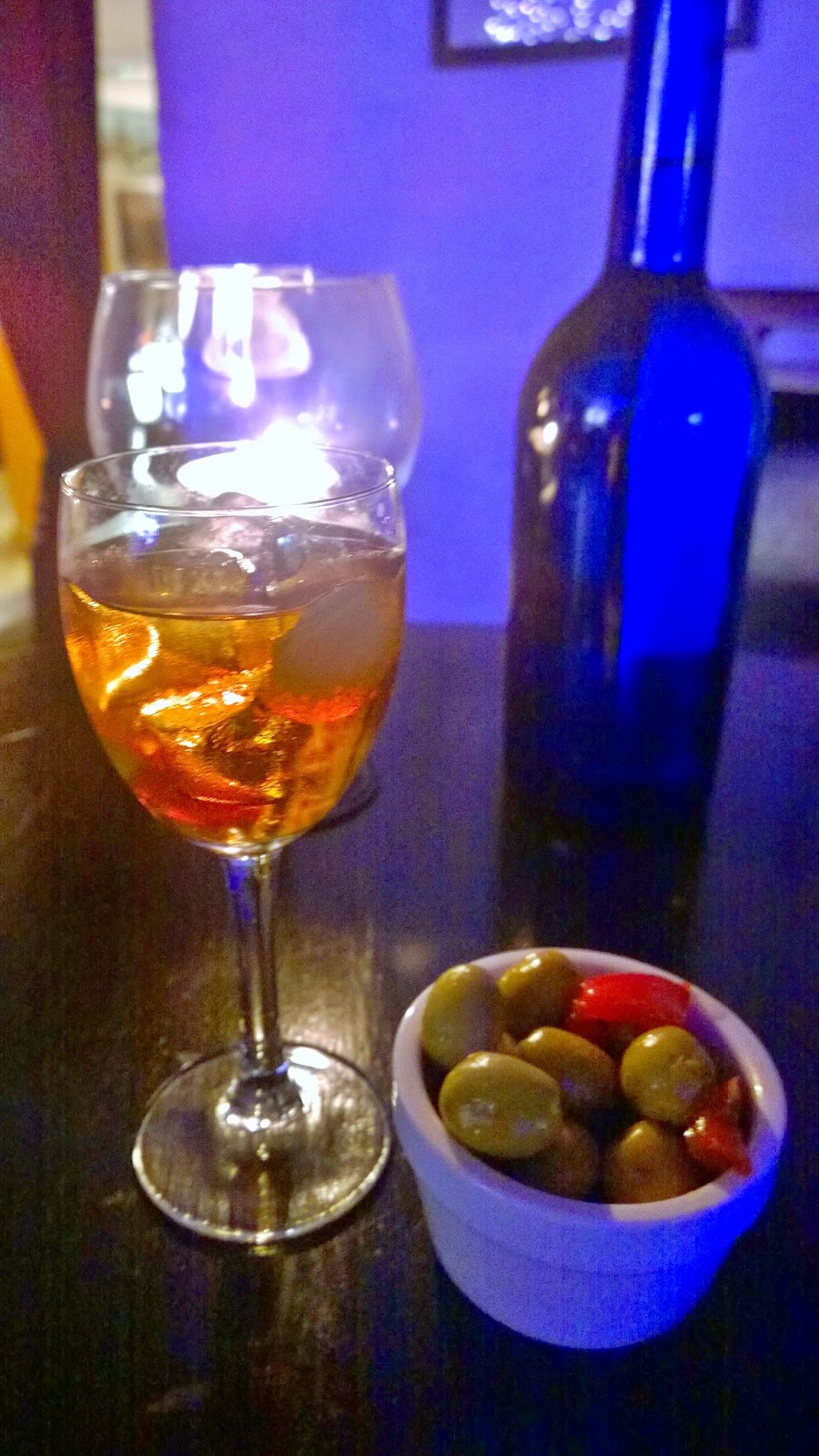 The passata was an excellent edition to the bread and cured meat standard tapas dish, it really brought out the flavour of the meat but also freshened it up so it cut through the richness.  After hoovering this up we were served a tortilla and some ultra smooth gazpacho with a quail egg and shredded Serrano ham on top, apparently this is traditionally eaten with the tortilla.  The tortilla was soft and creamy and the gazpacho was a heavenly substitute dip for anything to be honest, perfectly chilled for hot summer evenings.
Once we were poured a generous glass of rich Cabernet Merlot and had it's origins and matching notes explained, more dishes appeared all of the same excellent quality.  The egg mayonnaise type dish was given a kick and a fresher taste with gherkins, capers and spring onion, apparently this is popular for lunch on a Summer's day as it is chilled and not too rich. There were some tostadas topped with marinated peppers, onions and topped with fresh tuna and anchovy which would have been perfect on holiday for snacking with a glass of wine.

The three types of croquettes, cod, mushroom and ham both smooth and crunchy were all equally delicious. I was particularly impressed by the seared octopus with salt and paprika, so smoky and meaty it definitely surprised me how good this tasted.  Obviously no tapas meal would have been complete without some baked chorizo and our final dish was chorizo baked in cider which was once again wonderful, salty and yet slightly sweet.

We finished the meal with a selection of Spanish cheeses with nuts and home baked crackers, not just your standard manchego but some more unfamiliar ones to sample.  For our dessert we were brought some almond cake and a glass of Spanish Cava, much tastier than normal Cava, which I tend to shun in favour of Prosecco.  The cake was wonderfully light and the almond flavour worked perfectly with the poached pear in wine that came with it.
The Spanish menu at Harvey's is exquisite, full of new dishes I had not tried but now definitely want to eat again. The menu paired with wine is £35 per head which is such great value, Rich and I were struggling by the end of the meal.  I do think they should offer these dishes as part of the main menu at all times, the food is worth being available at all times it is that good. This menu is not for the fussy as we were not sure what dishes to expect, you basically will be up for enjoying the surprise.  To find out more about this menu and the other food Harvey's serves check out their website.  This tasting menu was offered complimentary by Harvey's but you can see by the high standard of food this did not impact this review,  I would have paid for this in a heartbeat, one of the nicest evenings we have had out in a long while.
Posted by Abby and Rich at 12:44