Lunching at My Burrito

Mexican food definitely ranks as one of my favourite cuisines, so when two burrito venues opened within weeks of each other last year I was there like a shot. Mission Burrito on Park St but I followed up a visit to My Burrito, opposite the Hippodrome, a month or so after that. I kept returning to Mission Burrito but I thought Friday it was finally time to pay my second visit to My Burrito.

A gorgeously sunny day in Bristol greeted me on the way down to Mexican flavoured lunch joy, the first few sunny days of the year always brings smiles to people's faces, and it added that extra spring to my step. It was fairly quiet when I arrived which meant I could get to building my burrito right away. I went for a chicken burrito with pinto beans, smoky salsa, salad, cheese and sour cream. The chicken and the roasted vegetables are grilled fresh on the hot coal griddles behind the counter which filled the room with a lovely barbecue scent.

I sat in the little seating area which is made up of some mismatched sofas, tables and chairs and the strong sunshine filled the back of the restaurant and it was refreshingly light and Spring like as I sat down to eat. The burrito itself was very heavy and well filled, it was going to be a challenge to finish it, but I was up for tackling the task. 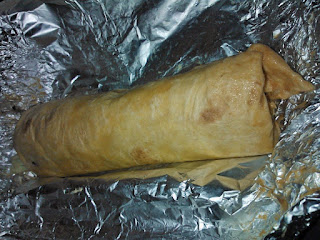 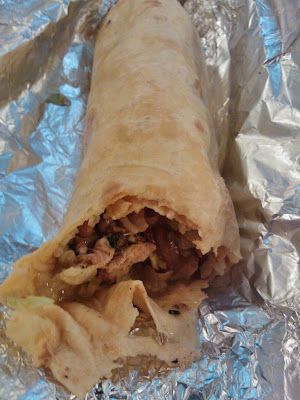 The taste was good on the whole, I definitely would recommend the chicken, the chunks work better than Mission Burrito's shredded chicken and was well flavoured. However the burrito itself was quite wet inside, more than it should have been, which made it fall apart quite quickly and very messy to eat. The pinto beans were tasty though and the salsa smokiness came through. There was no flavour coming from the cheese at all which makes me believe it is either very mild or there was just not enough of it, and a bit too much sour cream which threatened to over power the whole burrito. 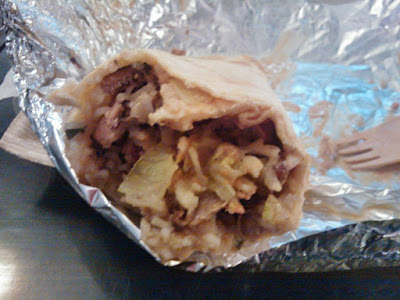 These are fairly minor quibbles however and I would recommend My Burrito to those looking for something fresh and different for lunch, they fill you up without having that heavy feeling in the stomach, you know when your eyes take over stomach size. I do personally prefer Mission Burrito's burritos but I shall review them at a later date so will keep my comments on the comparison to a minimum, for now.

To browse for your lunch burrito choice visit the My Burrito website.
Posted by Abby and Rich at 11:18