On Saturday we woke late and were mulling over the idea of a picnic on Clifton green but then the phone rang and Jamie said that she and Boz were going to drive to Portishead to walk around for the day and grab some pub food, we were in.

It was lovely to actually feel warm outside, Winter has seemed very long this year and to finally be able to leave the house without a coat was hugely refreshing. We walked around enjoying the sea views until we reached a pub. The pub was The Royal Inn and there were many tables and chairs outside looking over the sea. 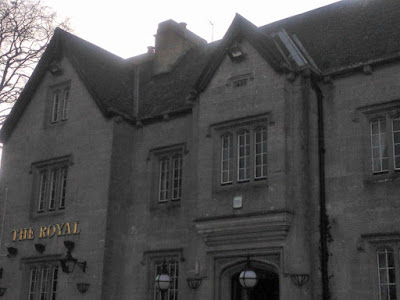 We stopped for a spot of lunch, being it was the first warm day of the year it was fairly busy with families. We picked up a menu to see if there was anything we fancied. The menu was mostly pub grub fare with fish and chips, burger and sandwiches but with occasional smatterings of something lesser spotted on pub menus, like Coq au Vin.

Jamie decided to plump for the aforementioned au vin whilst Boz went for the pork burger which was on the specials board. Rich and I went for their ciabatta sandwiches. I chose the chicken with salad, sunblushed tomatoes and basil mayo whilst Rich picked the BLT which topped by mustard mayo rather than the usual mayonnaise, both came with salad and chips.

When we went to order the staff were wonderfully friendly and it did almost feel like we were on holiday somewhere instead of just 20mins down the road in Portishead. I am happy to report when the food arrived it far exceeded our expectations. This was good simple meals made well, which some pubs don't always get right.
The Coq au Vin was extremely well flavoured, and we were all impressed when we had a sample of Jamie's meal it was a real surprise and the chicken melted in the mouth with all the tomato and winey juices, plus it was a very generous portion. The only downside was that the mash seemed quite dry. The pork burger was remarked as fresh and tasty but oddly came with a pot of tsatziki, normally perfect with lamb, which did not really go with pork, Boz said he would have preferred a sweet apple chutney or something similar.
Finally our sandwiches, which we chose partially because we didn't want a big lunch, because the lovely Jayne was cooking us dinner in the evening, which was almost more delicious than I can describe, and also because I actually have a bit of a crush on a well crafted sandwich.

These were some of the best sandwiches I've had in a while, and I have been crowned sandwich crafting queen in my family. The ciabatta was crunchy but flavoursome but for me the basil mayonnaise was the crowning glory working beautifully with the chicken, sun blushed tomatoes, of which I am already quite the fan, and salad. The bacon in Rich's BLT was thick and high quality and perfect with the mustard mayo. The chips were as you would want them to be, crunchy on the outside and fluffy on the inside, well recommended.

We all declared that on a sunny day we would gladly return to The Royal Inn to enjoy the warm sea breezes and home cooked food. Definitely go there if you find yourself wandering around Portishead pier and sea front the food is extremely pleasing. To view their menus go to their website the evening menu also looks superb.
Posted by Abby and Rich at 11:40