Curry at The Brunel Raj

Since Thursday last week I have had a cold it seemed to disappear Saturday and then come back with avengence  on Monday I needed something spicy to help burn the ill out of my system so after consulting one of my chilli fanatic friends, Phil, we were off. So we have Phil guest blogging as his taste buds were at full capacity as mine were slightly numb with disease, plus he has sampled many of Bristol's curry houses. Over to Phil...

And so it was agreed. Monday night was to be a curry night. Where to go? I consulted the big G in the sky and waded through several pages of search results. It would appear that I indulge in curry too often, I’ve been to every establishment returned by my "Indian BS8" query. Except one. "Posh Spice". Joy.

Upon walking the length of The Mall in Clifton Village it quickly became apparent that Posh Spice no longer exists, presumably it's off pursuing a failed acting career. Not to worry, local favourite The Brunel Raj was only a moment away. 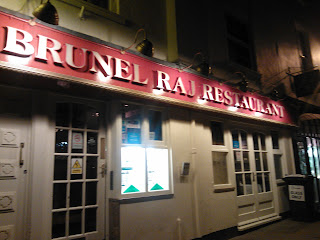 The Raj is a relatively small venue, with it kitchen situated adjacent next to the dining area. This adds to the appeal, a thick aroma of spices and tandoored meats greets patrons as they arrive, with sizzling plates being wheeled to and fro at an alarming rate. Above the cacophony of amassed Cliftonites conversation was somewhat strained, but the fact that we were lucky to get a table on a Monday night tells you all that you need to know about the quality of the food here.

This evening was no different. My Chicken Tikka Chilli Masala was attractively presented, surprisingly light and with just the right amount of heat. Abby's Chicken Karahi had an earthy and moreish tone, whilst Rich's Chicken Ceylon balanced the coconut and spices perfectly. Whilst no dish was exceptional all were rock solid, and that sums up The Brunel Raj for me. An establishment that cares enough to have its own branded  post-dinner chocolate treats probably cares enough to make sure you have a good dining experience. Until the next time. 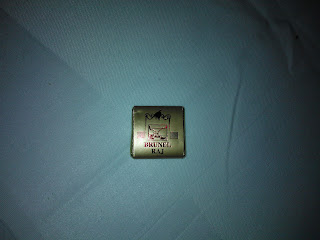 I mostly would agree with Phil. For me the Brunel Raj is one of the best curry houses I've have experienced in Bristol so far, although I am very fond of Rupsha and Kathmandu. Either way my Karahi was delicious I had never had it before, it wasn't hot as I needed for my cold but one or two tastings of the Ceylon and Chilli Masala was enough to rectify that. Our next curry event hopefully won't be too far away.
Posted by Abby and Rich at 11:58