Last week was a massive dose of coughing half my lungs out and generally feeling sorry for myself. Sunday I dragged myself out of the house to meet Kym for lunch, something I was really looking forward to. Soukitchen, Clifton branch, has been open about 6 months and despite being five minutes from my door this was my first visit. Absolutely woeful.  Situated just off Whiteladies on Apsley Road as far as I can remember there has been a bar or restaurant at this site. Most of these ventures lasted a very short time, perhaps due to location. Souk has solved this with some lovely bright signage that draws in the eye, that and their reputation. 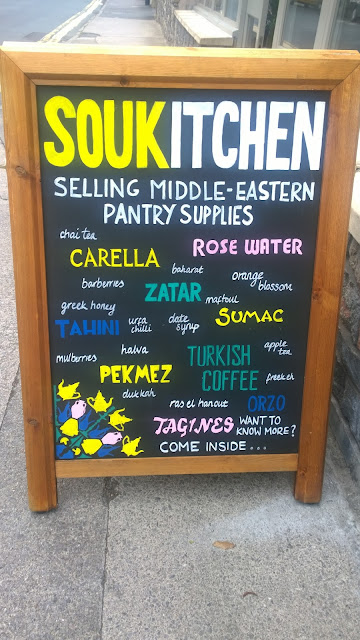 Soukitchen specialises in Persian cuisine but with a much more modern approach to Middle Eastern flavours. Kym and I ordered some drinks and got to the arduous task of deciding what to eat, which was a tall order I can tell you. Meeting someone at 12 means that you're just about on the cusp of being able to acceptably order brunch. However in my mind eating brunch much more after 12 feels wrong.

Tempted by their cinnamon French toast or the shakshouka, poached eggs in tomato base with onions spices and flatbread with the option of merguez sausage add on was almost too much to pass up. That is until I saw a leg of chicken on a bed of pearl barley with grilled peppers, Iranian gherkins, red onion and spiced yoghurt. Sold. Kym also followed suit and we ordered some hummous and bread to share.
Just look at my spritzer, a drink topped with rose petals, beautiful and delicious. The food was outstanding. The bread, from Mark's Bread, was superb, my only slight criticism would be that I found the hummous not as smooth as my tastes prefer, this is personal preference however. The crowning glory of the lunch was the wonderful chicken dish. Packed full of flavours and textures I could easily see this being a firm favourite on my must have dishes in Bristol. The chicken was juicy and spiced enhanced by the smokey yoghurt and the pearl barley was plump, we practically licked our plates clean.

Can't wait to return to Soukitchen they really offer something different and that is no bad thing in a city full of burgers and pizzas, which I enjoy eating, it's just nice to have as many options as possible. To find out more about Soukitchen visit their website.
Posted by Abby and Rich at 15:50 No comments:

We were invited to Wahaca this week to sample their newly opened wares, Rich is here to tell you all about our visit...

Wahaca’s anticipated and well-publicized opening in Bristol was met somewhat cynically by myself. Having grown up with Mexican food, and tasted numerous bad examples of it in this country, with many of the worst offenders having gone out of business, and some desperately hanging on, and with Wahaca being a chain (albeit a respected one), I was fairly ambivalent about the whole deal. Reading the numerous good reviews it’s already received however raised my view on the restaurant, but I still went in with a good degree of caution.

The initial surprise when you go comes from seeing just how big the place is. From the outside it doesn’t give much away, as all you can really see is the bar area and a tiny portion of the dining space. It’s much larger than it looks, and they’ve used the space well, considering they’ve had to add a kitchen to what used to be a homeware shop.

Anyway, enough about all that, the food.

First up for us of course were some tortilla chips and guacamole. So far so standard you may think. And this is exactly what I thought. But I was pleasantly surprised here. Most places that do ‘chips n dip’ do so very basically, very ‘economically’, and are very often obviously shop bought, and of poor quality. Most guacamoles commercially available for instance hardly even have any avocado in them at all. So I was impressed with Wahaca. The chips were obviously made in house, and the guacamole was both nicely fresh and full of flavour, but also had decent chunks of avocado, rather than it just being a pureed creamy green mayonnaise. 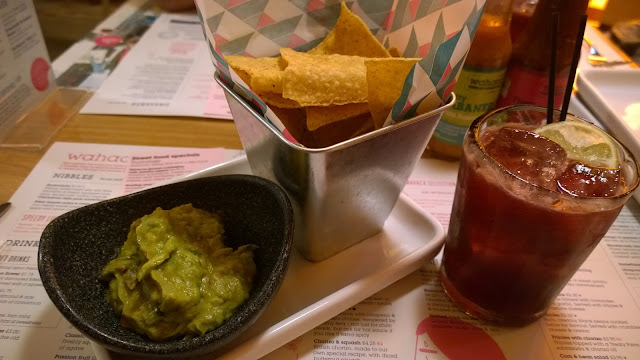 Chipotle chicken quesadillas were the first of our main dishes to arrive, and it too ticked all the right boxes. The chicken was tender and perfectly smokey and spiced with the chipotle, but not overly so, so as not to risk overpowering the meat, and there was enough cheese to add flavour and a nice texture, without it smothering everything.

The sweet potato chips side was good too, with each piece being the right size so that it had a nicely crisp yet chewy skin, but still enough of the distinctive sweet potato flavour. Our other side, the coleslaw, was by comparison fairly unexciting. But it would be – it’s coleslaw. That undersells it though, as it was cool, crisp, had a light tang to it, and with the just right hint of creaminess (no-one wants watery creamy coleslaw). 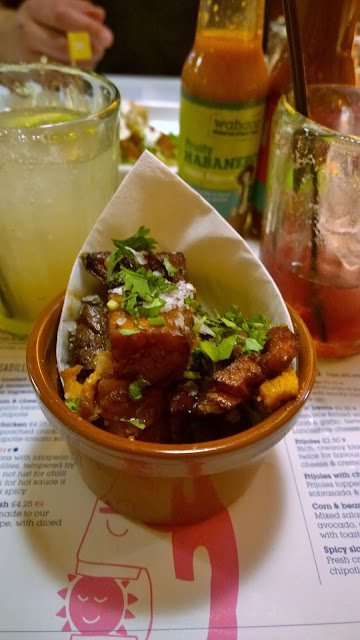 Advertised as a main dish, the fish tacos were served as three slightly larger corn tortillas filled with fresh pickled vegetables, chipotle mayo and panko bread-crumb covered fish. The mayonnaise really complimented the fish and the portion of goujons was generous. It managed to be both generously sized and a great tasting dish.

Another smaller dish from the street menu was the more fusion sounding, bound to have the authentic cuisine zealots up in arms, salmon sashimi tostada - one of Abby’s highlights. Two crispy corn tortillas with good size portions of salmon, enhanced with a creamy avocado and chipotle, and topped by a garnish of crispy onions. This was fresh and surprisingly moreish, definitely one to order on a return visit.
My pork pibil tacos worked brilliantly too. The pork was flavour-some and moist (dry pork is even worse than a creamy colesaw) and had the perfect accompaniment of pickled pink onion. Apart for looking really rather nice, they add a nice sweet and sour hit that really raises the dish.
I’d chosen chicken caesar taquitos as my third small main – though I confess partly out of suspicion. Chicken taquitos, yes fine, no problem, but chicken caesar? Sounds like a wrong mix. But it worked. The taquito itself was properly crisp and the Caesar flavoured chicken really did go well with it, and the salad that it comes with. Best of all, the taquito was nice and dry, there wasn’t any grease running out of it, or dropping off and congealing on the plate.
Now, the thing I was really looking forward to was dessert. Wahaca do churros. And I love churros. Rather annoyingly though, finding good churros tends to be quite difficult. Not a lot of places do them, and many that do have a habit of making them soggy, greasy lumps. Wahaca’s churros then made me very happy, coming both as a decent sized portion and nicely crisp with a decent smattering of cinnamon and sugar. We had two dips as well – the standard dark chocolate and the more exciting salted caramel.

In truth, the dark chocolate, though the right consistency, was perhaps just a little too bitter for me. Not bad but personally not my flavour. The salted caramel however was just fantastic. The phrase ‘deliciously sinful’ may well have been created just for this, and I found myself having smaller bites of the churros, just to get more dipping in. If you have to choose between the two dips, there really is no contest. Salted caramel all the way.

One funny thing with Wahaca is the perceived portion size. You order a few things and it may not look a huge amount, but they are packed with food, and also are incredibly filling. We perhaps under-estimated exactly what we were getting, and finishing the desserts was a mission. Luckily I wasn’t going to waste anything that delicious, so you’ll be pleased to hear there was zero wasteage. But we were both pretty full afterwards.

Food then, is very good, and is an excellent addition to the array of casual dining eat-out options in town. It’s a slick operation too, with plenty of staff, in both the kitchen, and out and about in the restaurant. All of the staff seem to be very well-trained, knowledgeable and friendly, and all appear to have their own genuine opinions on their favourites. We were lucky enough to briefly meet Wahaca co-founder Thomasina Miers too, which though nice in itself, also highlights something else as well. Despite it being a chain, she is making sure she is involved, and is actually being hands-on, unlike other chain venues, and specifically other celebrity chef owned restaurants, where a place is opened and the name is just stuck on there – no names mentioned.

Although we were invited as guests of Wahaca this did not impact our opinion of the food. To learn more about Wahaca visit their website.
Posted by Abby and Rich at 15:03 1 comment: