A couple of weeks ago Phil had booked us a table at the Mint Room for his birthday, with mixed results, Rich takes a look over our experience there.

I don’t usually like to split reviews into ‘sections’, but the service at The Mint Room was uniquely weird that it needs its own discussion. Lazily aggressive is the best way you can sum it up. Requests for water for the table and asking for someone to come and take our drinks order would be met with agreement sounds, before our waiter would disappear, and then not come back. Ten minutes later they or someone else would reappear and we’d have to ask again. And it happened a few times.

When taking food orders, bear in mind we were eight people on a long table in a busy restaurant on a Friday night, the waiter would stand one end and shout at us, and we’d have to shout back, rather than him just stand closer to us. This lead to lots of back and forth and having to repeat, and one person inevitably getting the wrong dish. Luckily being a vegetarian, it was still a paneer dish, but very much not the right one.

The worst, and most cringe-inducing aspect however was a female friend attempting to order a hot dish with this waiter. Asking what the hottest thing on the menu was, it took a few attempts to get something that clearly wasn’t medium heat. And then when it was agreed that the jalfrezi was the hottest thing on the menu, he was insistent (quite condescendingly) that she should only have the milder version, not the hot one. It reminded me of a time a friend of mine tried to order a drink at a bar, but the barman refused saying “No, you don’t want that. You want something sexier…” – presumably as some flunked attempt at barman-customer seduction. It didn’t work – she got bored and had a drink elsewhere - whereas this waiter-customer interaction just came across patronizingly as “I don’t think you can eat hot food”. What proved it was when another one of our group (male this time) asked for the same thing, was met with a nod and “Sure thing”. 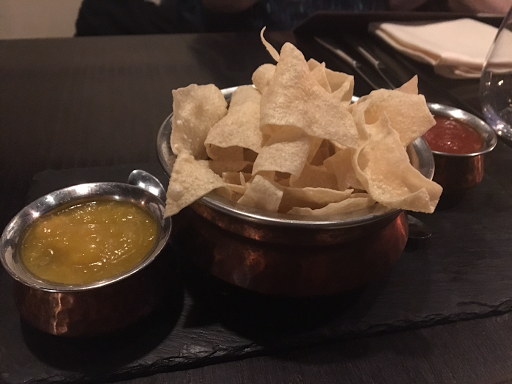 As for the Food, the Mint Room menu is a decent affair, with an interesting blend of some familiar dishes (with a twist) and some lesser seen things, so it was a good opportunity to choose something a little different. We were brought two dishes of poppadom fragments with some dips for us to share, although these were removed before they were finished once we had ordered our mains, which I thought was somewhat odd. As for my main I opted for the Marinated Lamb Rumps ‘Chettinad’ Style, whilst Abby decided to go for the Chicken Lababdar, and a peshwari naan. The menu description for mine was “6oz lamb rumps marinated in freshly pounded black pepper corns and hung yoghurt, then seared over hot plancha, served with saffron Basmati rice and seasonal vegetables”. The slices of lamb was hot, and very tasty, and the bed of spiced yoghurt had a distinct and tasty flavor that went well with everything on the plate. However my seasonal vegetables consisted of just one baby carrot and two tiny heads of broccoli, and the rice seemed to consist of a lot of the sticky ‘stuck to the sides’ rice you get when using a rice cooker and leaving the rice in a bit too long. It was shame as the main event itself was very good and, a little bit different, and eminently recommendable. 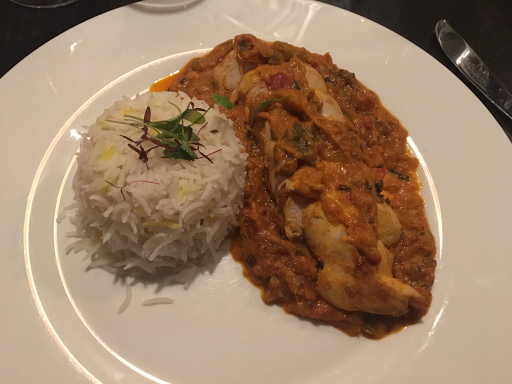 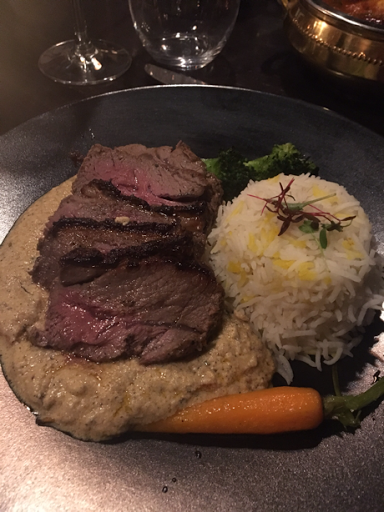 Abby’s chicken lababdar was a more ‘traditional’ style curry dish but with a whole chicken breast cooked in sauce with ginger, green chillies, coriander and cream, and some rice.. It had a bit of a kick to it and actually was delicious, but as with my main there just wasn't a lot of rice. But she remarked that the naan was excellent and was perfect for mopping up any curry sauce.

One big problem with the food was that it wasn’t particularly filling – a rarity with when going out to eat Indian food, and particularly for one of us who’s missing a substantial part of stomach these days. That said what we did eat was good and I can recommend it for the food. The price is at the higher end of what you’d be happy to pay for a curry (our dishes on their own were £16 each, a pint of beer was £4.50), but the overall experience because of the service and the price means we’d be unlikely to choose to go back – especially when there is such a good selection of Indian cuisine to eat out or order in from many other venues all over Bristol. Nutmeg in the village for example is tastier and less expensive, plus the service is much more what you'd expect. To find out more about The Mint Room visit their website.