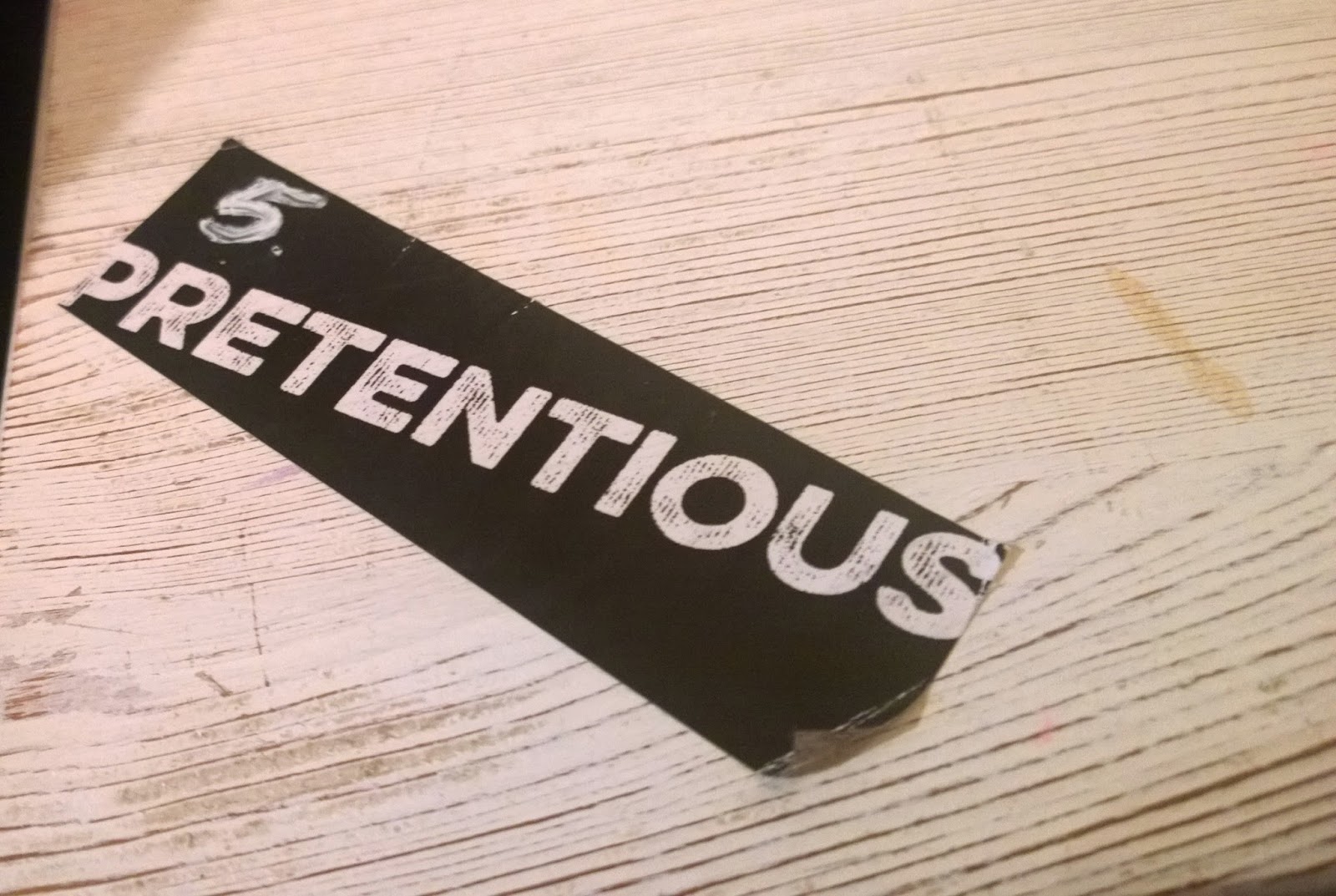 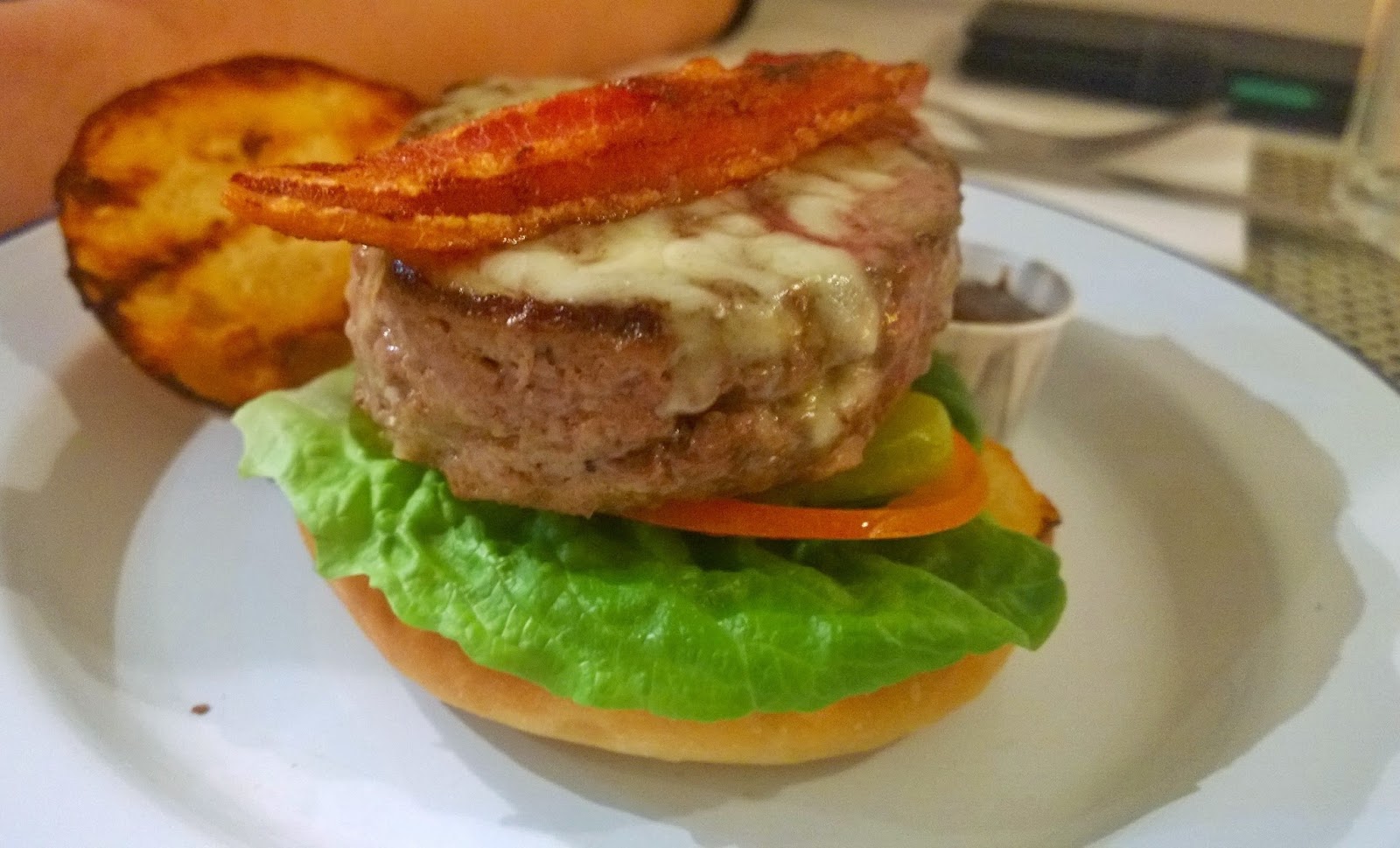 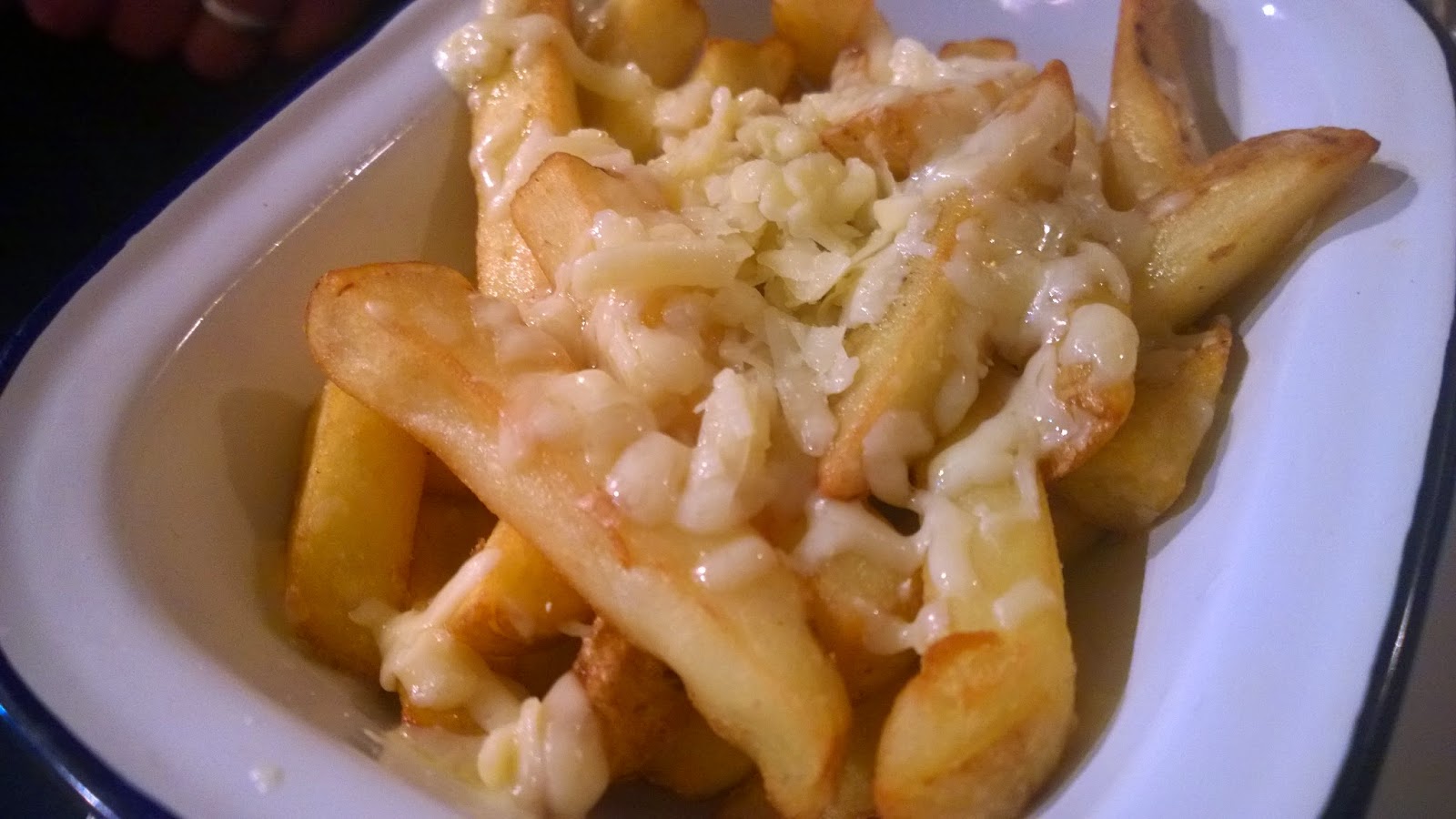 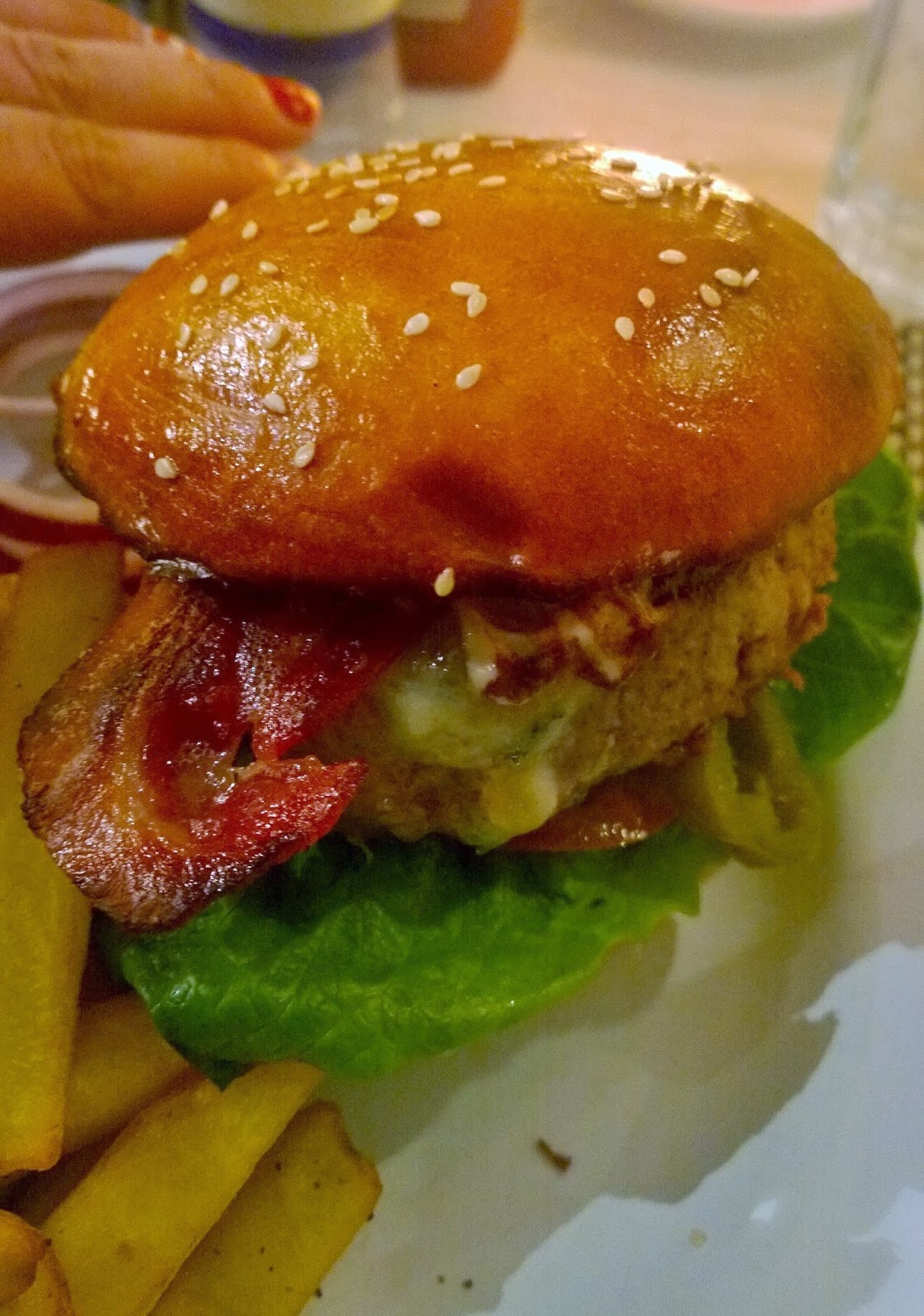 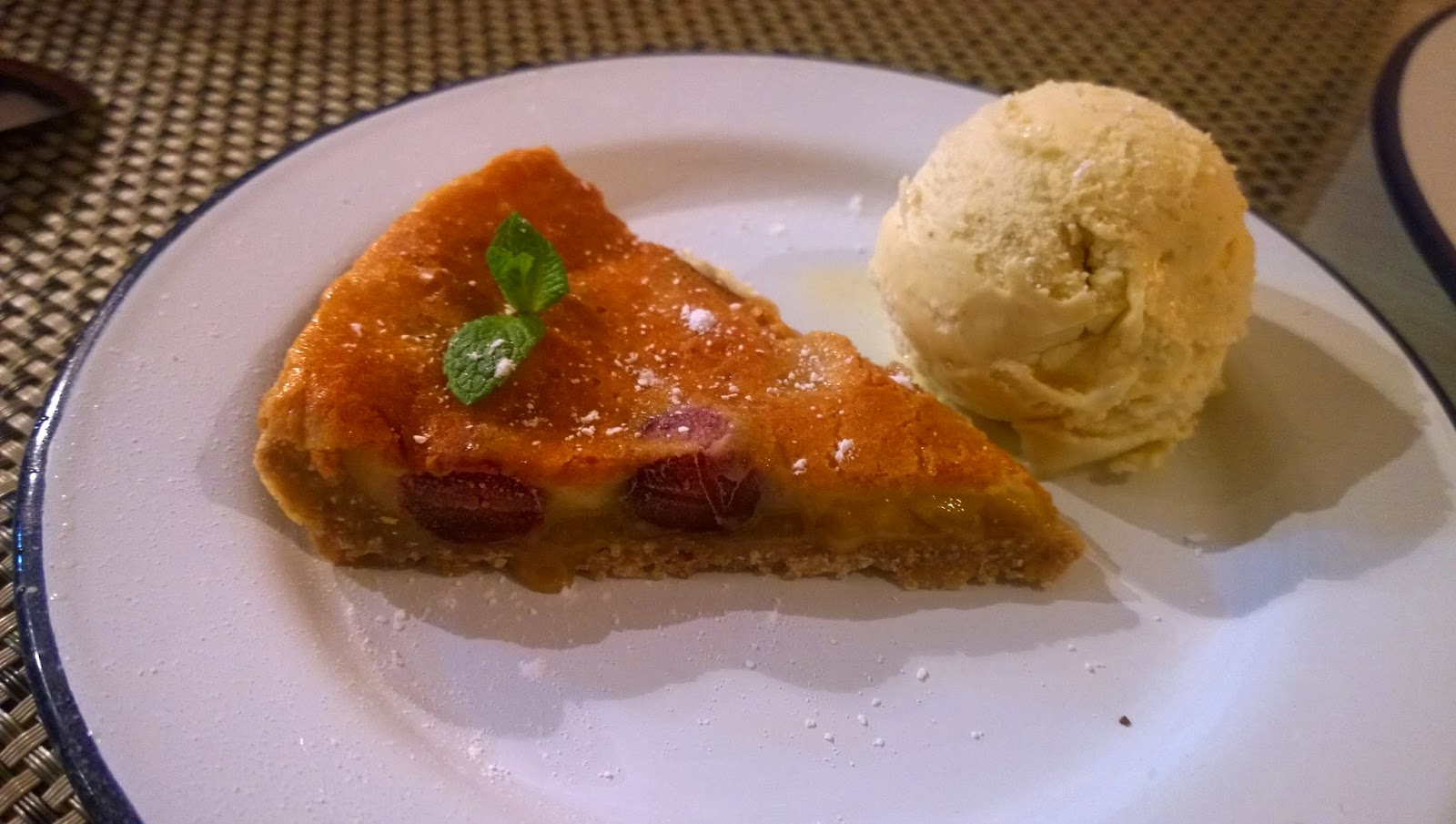 There is no doubt these super friendly guys have passion for what they do, they really want to know what people think and are constantly trying new things over the course of their residency. I do hope they open up somewhere in Bristol soon because these are great burgers, even though we already have a lot of burger options the sheer size of these alone are different from most of the options we already have. To find out a bit more about Pretentious Burgers visit their Facebook page.  Hurry if you want to sample them as they finish serving up on the 22nd of February.
Posted by Abby and Rich at 10:42 No comments:

It's a not so closely guarded secret that I love ramen, I have search high and low for good quality bowls of broth and noodles and I am pleased that Bristol has a few more places where I can find these steamy treats.  It has taken me a long time to get down to Sticks & Broth on Baldwin Street, and I have no excuse because I work five minutes away.  The past two weeks have been extremely cold and nothing hits the spot like soup or ramen to warm the cockles so on a freezing Monday I met up with Beth and Jo to finally sample Sticks & Broth. 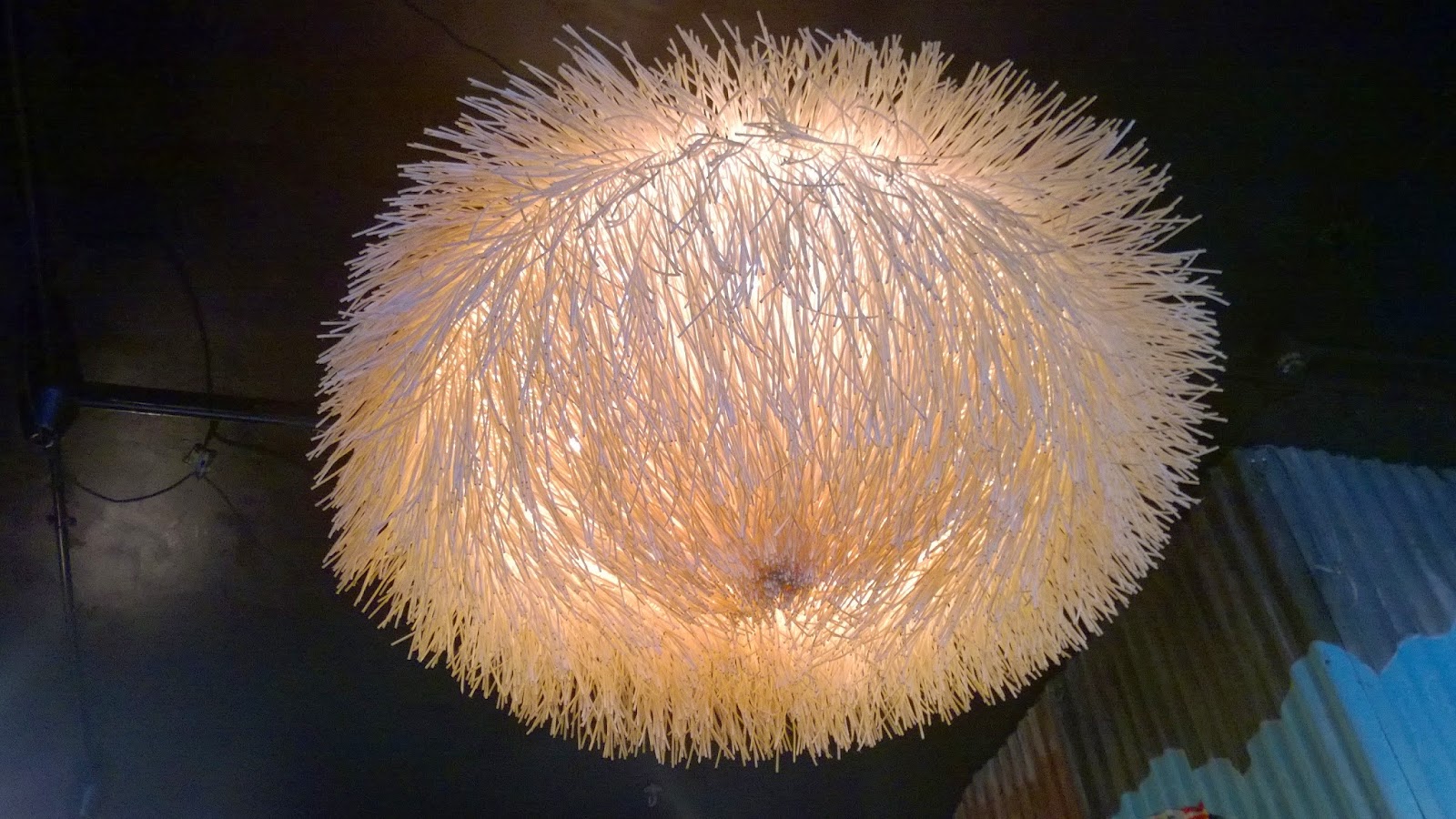 The decor is kind of industrial meets kooky, think corrugated iron, street art and fluffy lighting and that sums it up. It's different but I like it.  At lunch times Sticks & Broth offer an express lunch for £6.50 where you get a smaller bowl of ramen or donburi, there are about 10 different options to choose from.  I decided to pick the chashu ramen, pork bone broth with a slice of cha shu pork with sesame bamboo and choi sum plus half an egg.  We also ordered a pot of green tea to share.
The broth was really creamy and rich, as tonkotsu broth should be and the pork had a lovely crispy bit of crackling round the outside. I was somewhat impressed. Perfect for icy Wintery days. When I returned the following week I found the broth not not be as rich and creamy as the first time so it could have been an off day with the bone boiling.  Either way you cannot go wrong with a bowl of ramen in my opinion and for £6.50 it is a lovely place to meet up with a friend and slurp your way through the events of the day.  To find out more about Sticks & Broth, visit their website.
Posted by Abby and Rich at 11:37 No comments:

Chomp is a bit special isn't it? I first tried one of their burgers at one of the street food festivals a couple of years ago and it was somewhat awesome. When I heard that they would no longer be confined to hawking burgers from their van but rather in their own restaurant I was delighted. Chomp opened on St Nicholas street in November and has been hugely popular ever since.

Armed with Rich, Beth and Mr Popple we went, last month to celebrate the launch of their Chomp House Brew batch #2 by Wiper & True. Well everyone else but me, as I don't drink beer, but they had a special burger to go with it and that I was very interested in. For £15 you got a pint of the brew and a burger which consisted of the below: 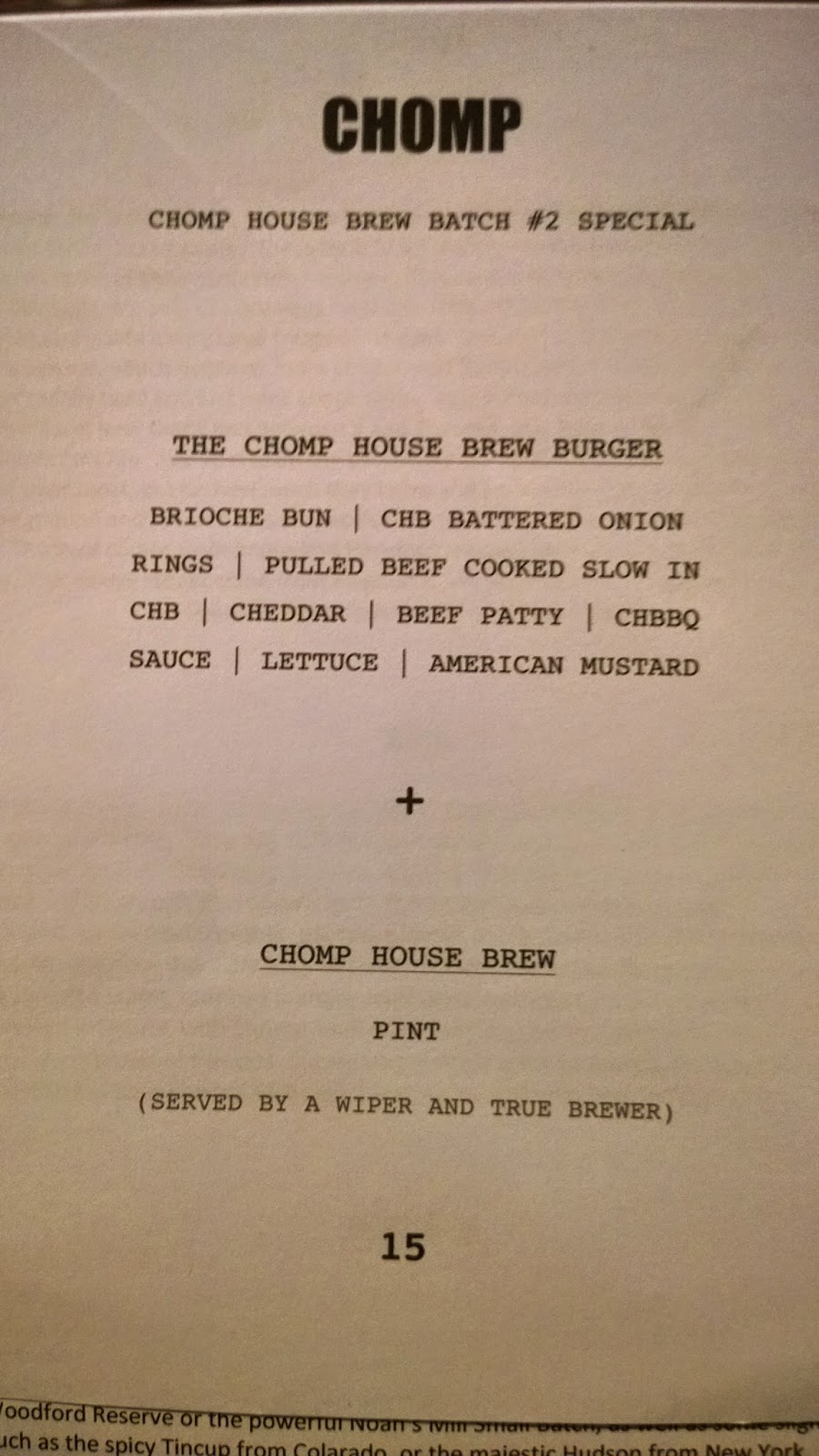 So we ordered a round of these burgers and 3 pints plus two blue cheese sauces for dipping our chips in, Beth and I are very classy like that you see. The beer was going down very nicely with the rest of the group I really like the idea of a restaurant having a signature brew adds something extra special to proceedings. 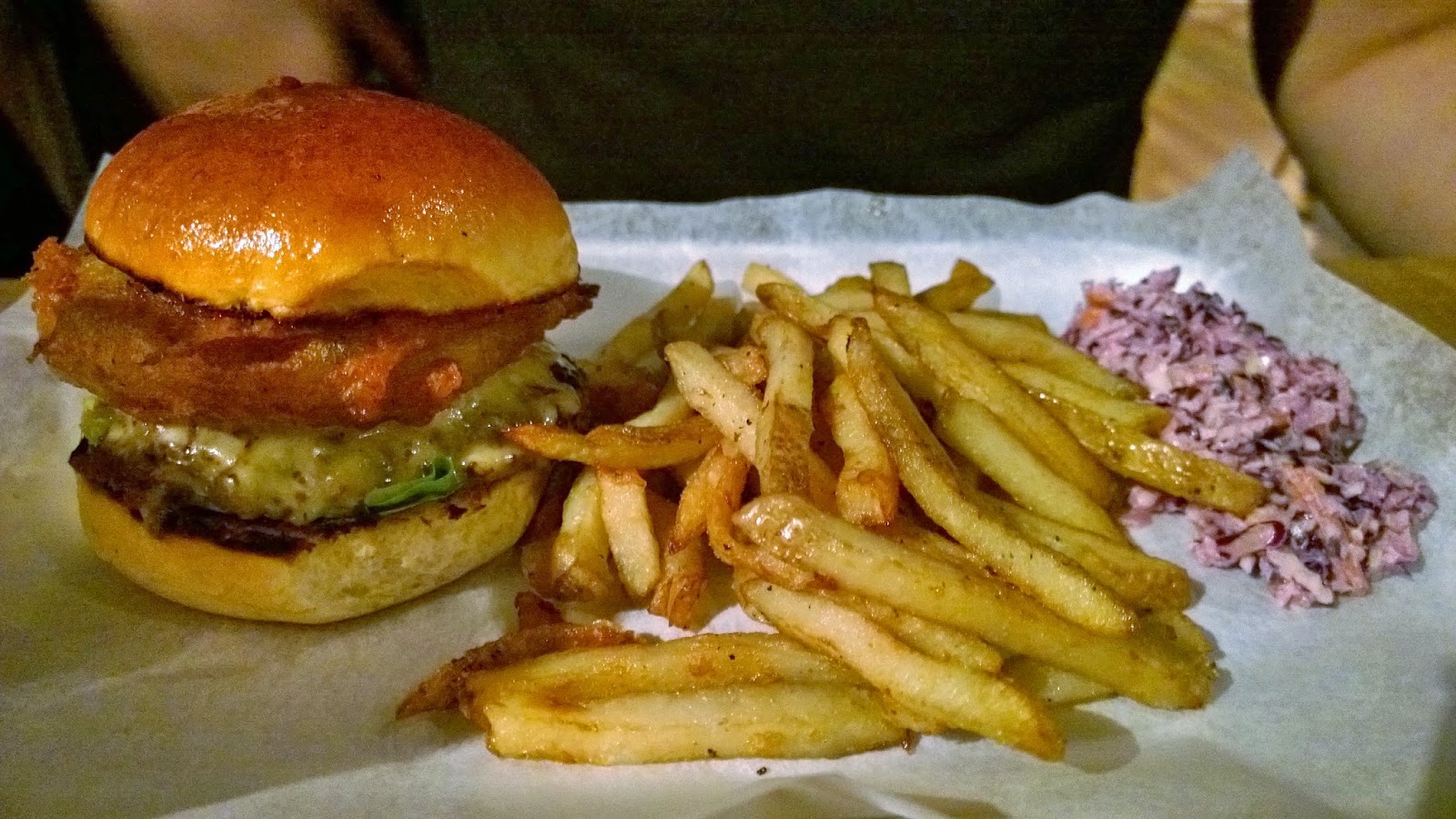 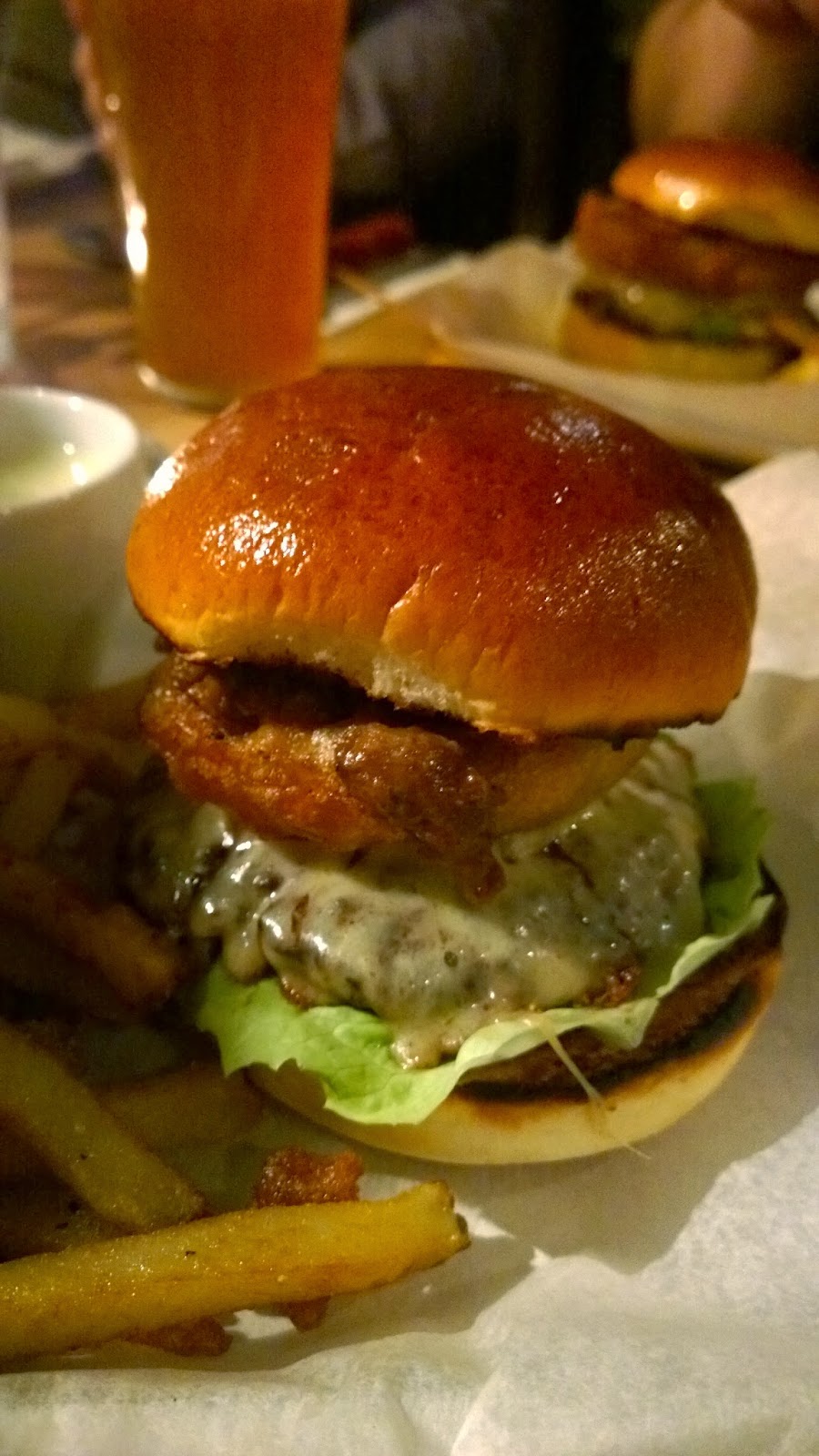 Just look at that bun, so shiny and substantial. Quite a tower of meat sat in front of me, covered in melty cheese.  Firstly the best bit about this burger was the pulled beef, they should have this on the menu full time, it was so flavoursome and fell apart, the star of the show in my opinion. The onion ring was particularly crisp and added a different texture to proceedings. One side of my burger patty was quite dark and crunchy, but everyone else's were fine I think mine had just had a touch too long on the grill. The bun was superb, best bun in Bristol I would go so far as to say, burger buns need to be substantial and should not be an afterthought in burger construction.

As for the rest, lovely coleslaw and the blue cheese sauce was decadently moreish. The chips were tasty but I could have stood to have them a bit crispier for my personal tastes, the seasoning on them was great though. Basically Chomp is rather delicious and provides something a little different in the busy burger market that is Bristol. High quality ingredients and focusing on a small menu makes for a great night out. I am looking forward to my next visit immensely, I might even treat myself to one of their steaks. I have also heard that Chomp's veggie burger is something to shout about so you won't have to worry about getting a limp salad on a suspect patty. To find out more about Chomp visit their website.
Posted by Abby and Rich at 13:55 No comments:

We actually know a lot of people with birthdays in the first week of January, one of those people is our friend Boz. He decided, as it was a Sunday, that he wanted to eat some jerk chicken and his favourite place to go for this is the Tobacco Factory market on Sundays. Agnes Spencer's West Indian cuisine is the place to go for such delights. A family run business, the company is named after their grandmother who came up with the recipes. Rich and I decided to take up the offer of two jerk chickens with rice and peas plus coleslaw for £10, one is normally £6. You can also choose between salt fish fritters, patties and goat curry. The welcome you get is friendly and seeing everything cooked in front of you just highlights any feelings of hunger. 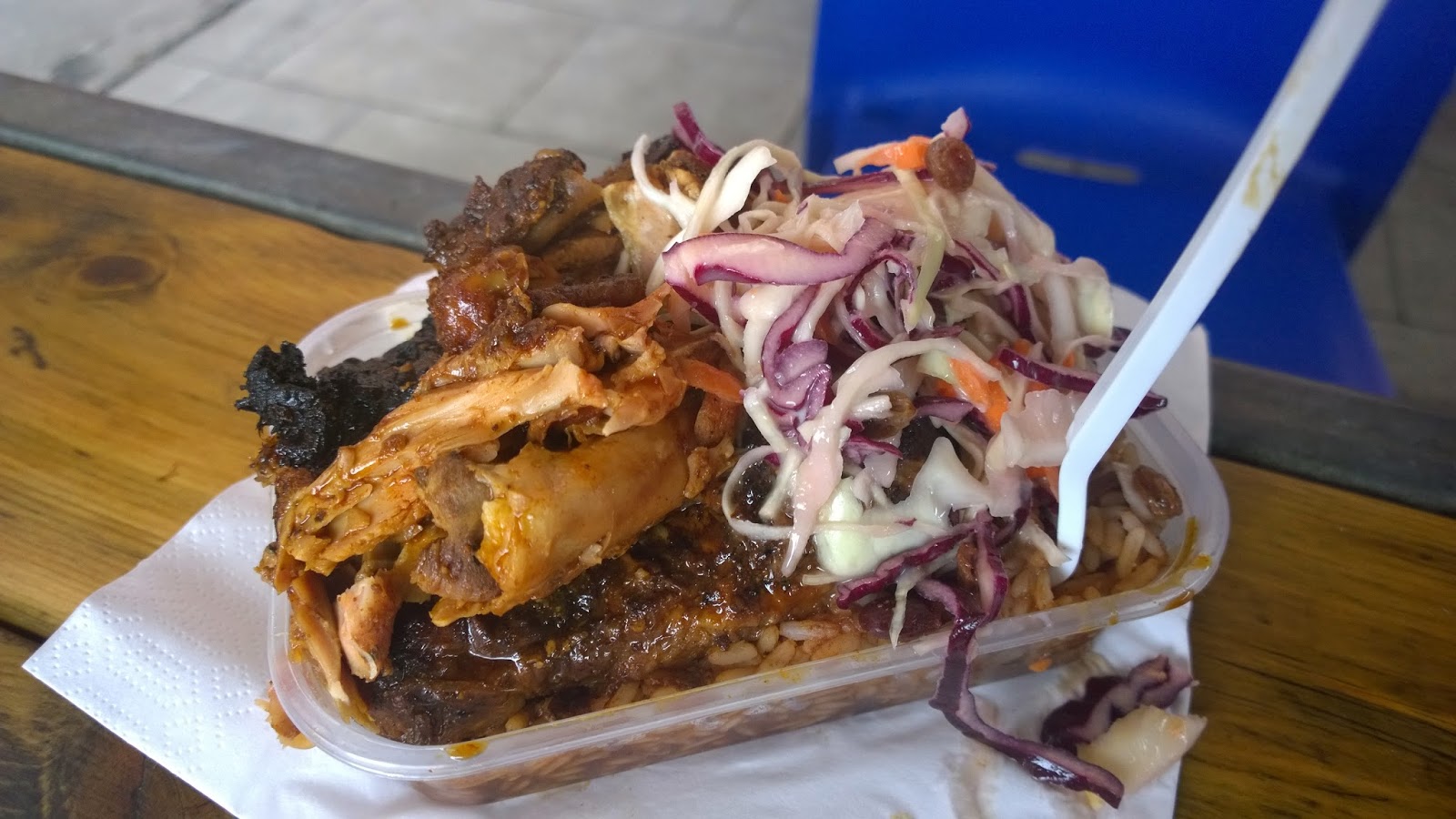 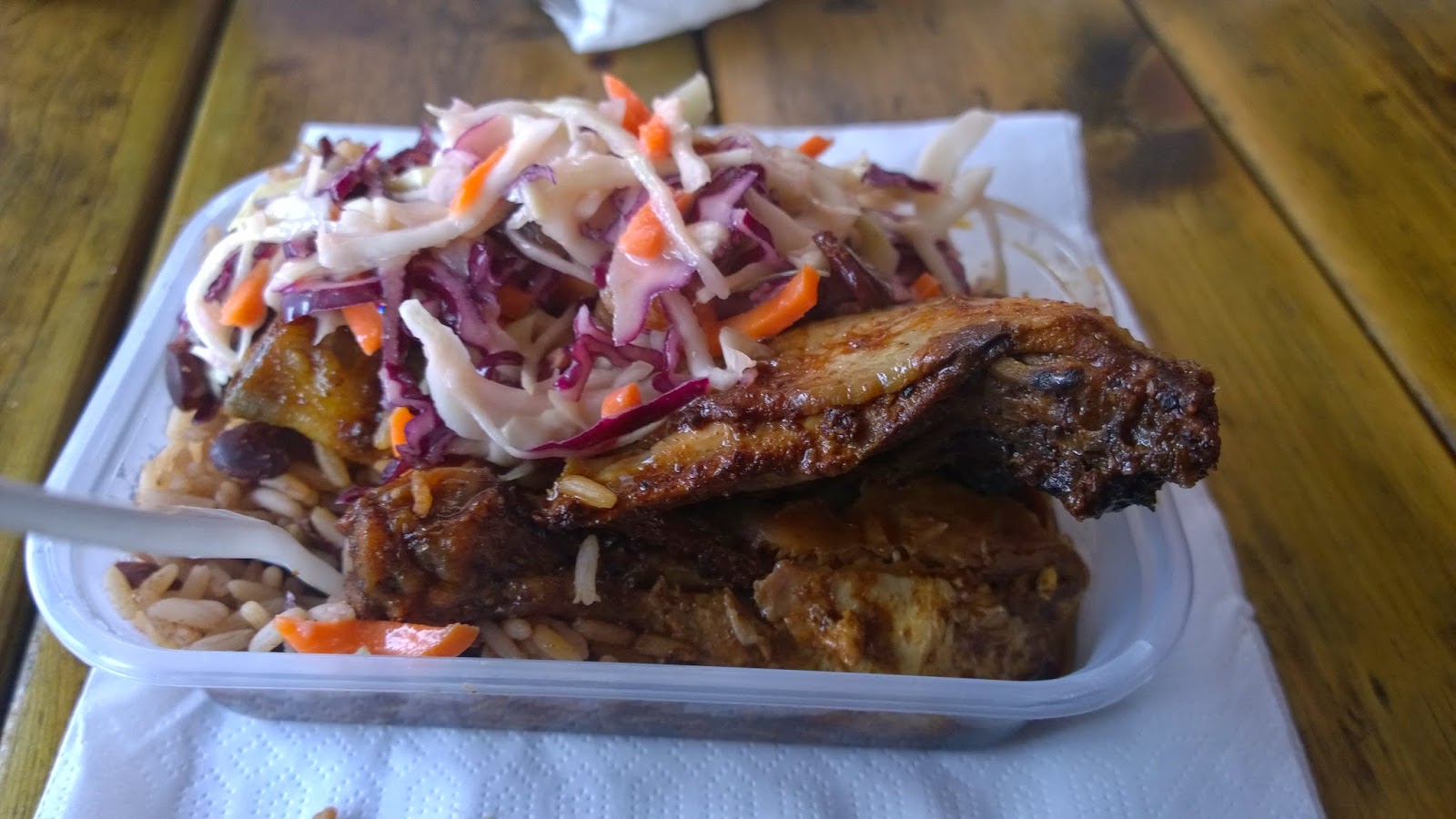 The portions are enormous and on a cold day there is nothing better than spices to warm the cockles. Although it wasn't super spicy on this occasion, the second time we went it had a bit more zing, the flavour on both visits was stupendous. Best jerk chicken I have ever had. It's advisable to take extra napkins and even a sturdier fork, for better manoeuvrability and shoving it in your face.

So if the Tobacco Factory is on your doorstep go visit Agnes Spencer's if it isn't then take a walk in the crisp Winter air and reward yourself with some warming jerky goodness, or whatever Jamaican cuisine takes your fancy. I had a nibble of the salt fish fritters and they are also excellent, although quite rich, I had to share mine. You can also get a fix of Agnes Spencer's at the Temple Quay market every Thursday for a spicy lunch kick.  For more info follow Agnes Spencer's on Twitter.
Posted by Abby and Rich at 15:30 No comments: