Testing Out Wriggle at Steak of the Art

Ever since I switched to an iPhone I have been putting the Wriggle app to the test. Wriggle is an app on iOS and Android that brings daily local deals from high quality independent restaurants. It helps restaurants conserve waste in real time by advertising deals that are local to you. You can leave your meal plans in the hands of the Wriggle gods to decide what you are going to eat for lunch or dinner. With new restaurants being signed up all the time the daily list keeps on growing.  I have been enjoying Bagel Boy and Yume for lunch quite a bit as they are closest to my flat and frequently on Wriggle. The guys at Wriggle wanted to give me some credit to test Wriggle on a place I'd not tried before, so I chose Steak of the Art. Two Steak and chips plus a sauce for £18. The app is easy to use you just click what deal you want and the amount and process the payment, and you are given a code to show the staff at your selected restaurant.

Steak of the Art is squirrelled away down on Cannon's Way and reached the restaurant soaking wet after being caught in an aggressive downpour. We arrived and were told there would be an hour wait for a table, which was a bit confusing but we sat down in some comfy arm chairs ready to order a drink whilst we waited. Steak of the Art offer a selection of cocktails as well as the usual beers, wines and some cider.  We were about to order when we were told there was actually a table available so we followed the waitress to the main dining area. Steak of the Art's selling point is their commitment to 'funky' interior and decor, There are paintings and pieces of art available for purchase as well as the pieces in each area being for sale, such as the furnishings. Steak of the Art is a restaurant gallery, which is a little different. The type of art is pretty commercial, lots of eye catching colours and pop culture references so there will be something for most people.

We sat down at a high booth overlooked by a large metal bull head. Rich ordered Bristol Beer factory beer and I went for a glass of Malbec. We also decided to opt for two starter plates so I ordered buffalo chicken wings with blue cheese dip and Rich chose the chorizo and smoked sausage on ciabatta. We also decided to both add a side of rocket and parmesan salad to our steaks for a bit of colour and freshness. 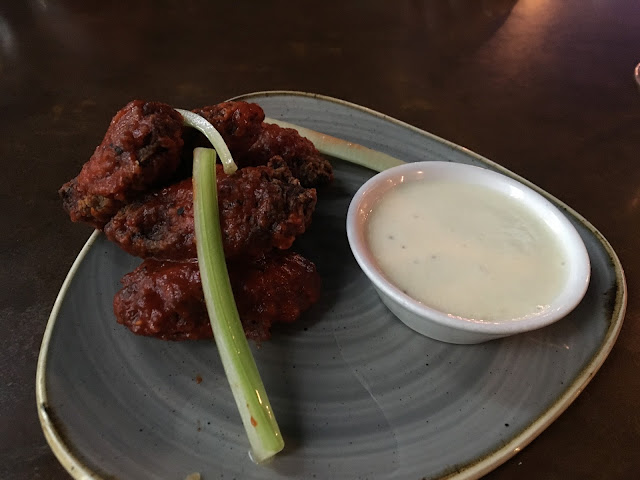 Rich found the meat on the ciabatta to be really flavoursome but the ciabatta had not been toasted and was too soft to hold the sauce and meat without disintegrating. My chicken wings had been quickly fried to give the extra texture, as per buffalo style, but they didn't really taste that chickeny. The dip was really wonderful though a good sharp strong kick of blue cheese much punchier than a lot of blue cheese dips you come across. This should be offered as an option for the steak as well in my opinion. On to the main event. 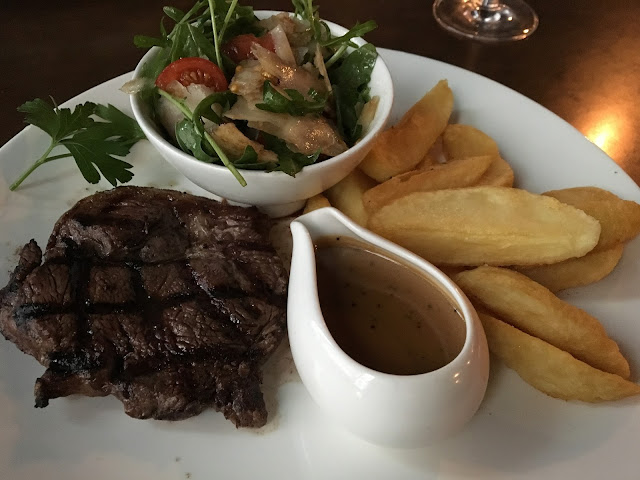 We did not have to wait too long before our rump steaks rocked up with a healthy portion of thick triple cooked chips, peppercorn sauce and rocket salad. The steak was cooked as we ordered  so my medium rare had a good pink colour running through it and was really juicy. Rump is not my favourite cut of steak but this one had lots of flavour. The star of the show were the chips. Crunchy and fluffy these were seriously moreish. The only let down was the salad, it looked a little sorry for itself and had too much parmesan compared to the amount of leaves.

A tasty experience at Steak of the Art. Was it my favourite steak? No but it was tasty and with Wriggle you can get it at a bargain price. The app offers great value at some fantastic Bristol restaurants but you can also find Wriggle offering deals for many Brighton restaurants as well, so spread the word if you know any friends down there or are visiting the quirky city yourself. To find out more about Steak of the Art check out their website.  Wriggle kindly supplied the credit for two steak deals, any drinks and extras we paid for on top of this, my opinion was not impacted and this blog remains as impartial as ever. Want to try Wriggle for yourself? Download the app and with my code ZKJXKA you can get £3 off your first Wriggle, happy Wrigglin'.

Last Friday evening I was treated to a visit from my best girl Jessie, so we decided to take her out for some food. It was decided we should test out Yatta, the latest incarnation on Nelson Street. Over the years this has been many different Asian restaurants, Shanghai Express, a personal favourite, the Wok Cafe and Buddha Lounge to name but a few. Yatta offers an all you can eat sushi experience for £16.80, per person, but also a half price on all al la carte menu items at lunch time.

We were given a warm welcome  by the staff and led to a table for four. They provide a tick box menu to order your chosen dishes. One side of the menu consists of sushi and the other hot dishes and sides. You are limited to ordering 6 from each side for each round. There is a pretty large selection, gyoza, wok fried noodles, teriyaki and tempura as well as futomaki, sashimi and nigiri to name but a few. We ordered a selection of dishes from both sides and waited for them to arrive whilst sipping our drinks. The lighting could be a little more subtle in the evening I found it a little too bright for my tastes. 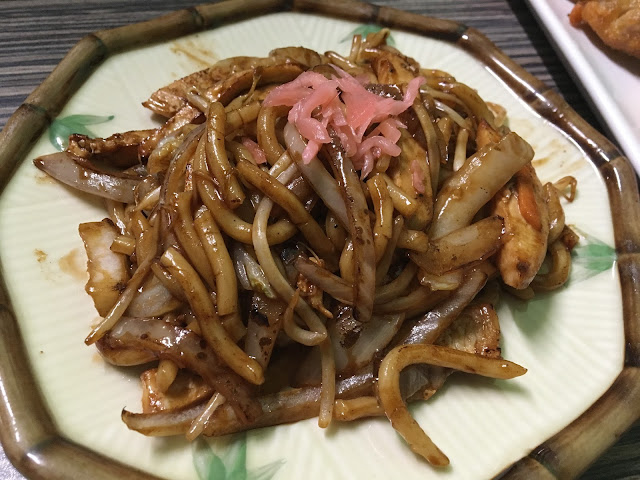 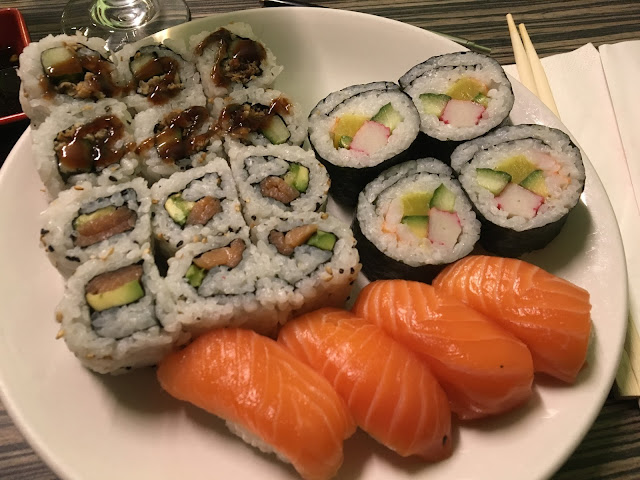 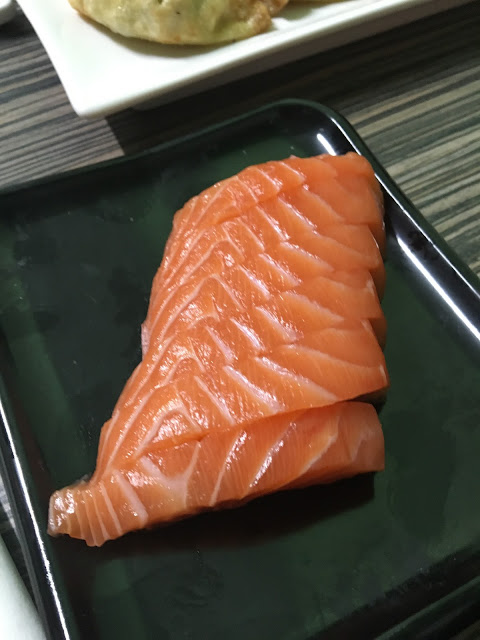 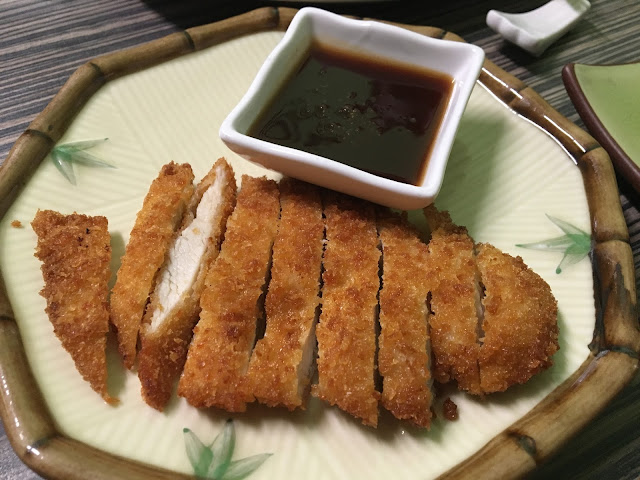 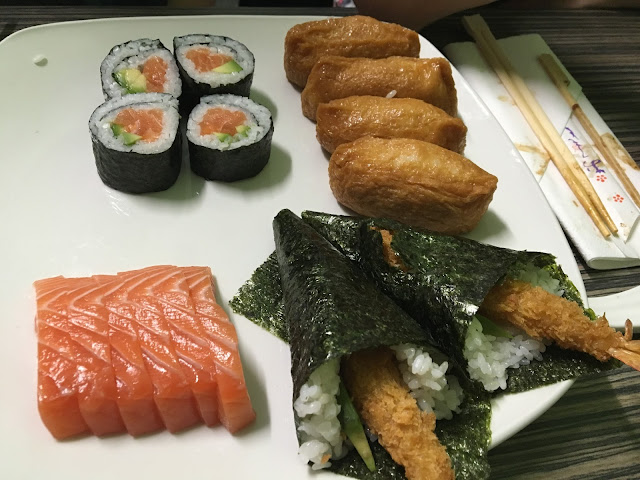 The food arrived promptly. The dishes I found to be mixed in quality. Our chicken udon ramen was tasty and well cooked, the sushi was well prepared and pretty delicious. The sashimi in particular was thick and fresh. Some of the other dishes could have done with a few changes to make them a bit better. The tempura prawns for example were a little soggy and needed more frying for colour and crispness. The chicken kara-age were nothing like any I've ever tasted and were not at all crisp. They need to make just a few tweaks to some of their hot dishes to bring them up to the same level.

Having said that for £16.80 for unlimited orders you could quite happily order a lot of sushi, sashimi and noodles. I would return again but it wouldn't be the top of my list. But for groups it is quite a good way of trying out lots of sushi dishes for a decent price. I certainly have my eye on the karaoke place above Yatta. To find out more about Yatta visit their website for more menu details,
Posted by Abby and Rich at 10:51 No comments:

On a recent warm Spring day, Naomi and I decided to meet up for lunch. Browsing local deal app Wriggle I posed to her the options available in the centre and she chose a noodle dish with Cupp, opened on St Stephen's Street just before the new year, which came with a bubble tea of your choosing. The decor is bright, geometric and fun with a few tables for dining in but as the focus is on the bubble tea most customers would probably be taking their tea away.

You can choose from rice noodles in soup, with a supplement of £2 if you want to add beef to the soup, or a vegetable noodle salad. I chose the latter and Naomi went for the former. For the bubble tea I picked my favourite flavour, taro, complete with coconut jelly. There are a few more options at Cupp now since I last visited their other home down in Cabot Circus; grass jelly and basil seeds which can be added to your tea. 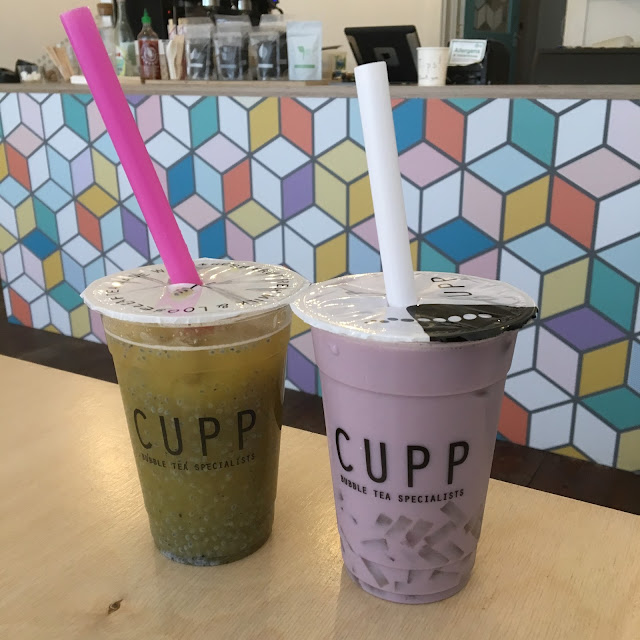 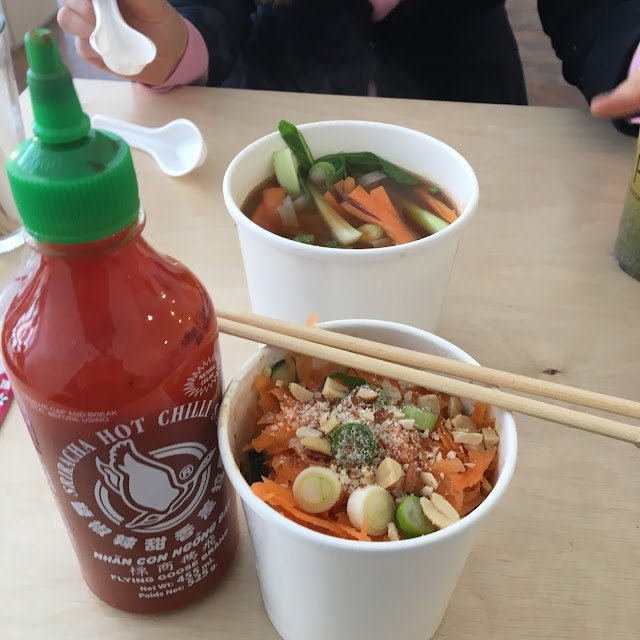 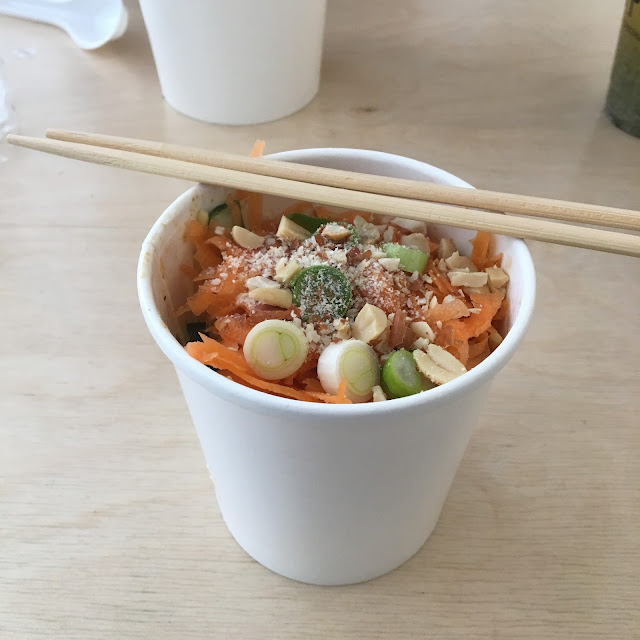 Lovely fresh and healthy ingredients with a sprinkling of crushed peanuts. The actual flavour was fairly mild but luckily I livened up with a healthy amount of sriracha sauce and a good stir. The bubble tea was as great as usual. Taro is quite sweet but there is something about it that I can't get enough of. For £5 for a bubble tea and some veggie noodles Cupp offer up a bargain that is hard to ignore. For a fresh and quick lunch option in the centre you can't go too wrong here. To find out more about Cupp visit their website or follow them on Twitter.
Posted by Abby and Rich at 10:23 1 comment: