An Anniversary Celebration at Noa

Just over a week ago Rich and I celebrated four years together. After not the best month luck wise we decided to just go for a low key meal, saving the big celebration for next year. So we thought something light and quiet on a mid week, why not Noa. Rich had been a few weeks before with some friends and said how good it was compared to the first time we went a number of years ago, it seemed perfect for a mid week celebration. So I got dolled up in my finery and we headed for a pre dinner cocktail at Amoeba, where I always have a Thai daiquiri, one of my favourite cocktails of all time, fragrant but without being too sweet. 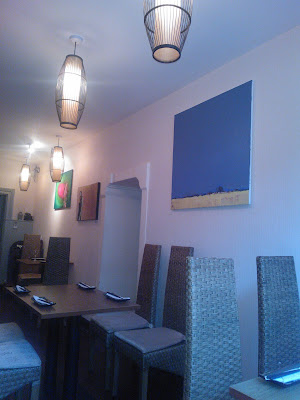 As we arrived at Noa at the same time as a new waiter was turning up for his first trial shift, he looked nervous, but I had every faith. We ordered a bottle of wine and decided to go for the set menu plus a bit of sushi on the side, I can never resist a portion of salmon sashimi, and we also ordered some maki rolls and a portion of inari. So for our set menu we both ordered the chicken karaage for our starter and for our mains Rich picked the katsu curry and I the salmon wasabi don.
The sashimi was more thinly cut than I have had before, the flavour and quality were very good though.  The uramaki rolls were well filled but the sushi rice wasn't quite as good as I've had in other sushi places, plus the inari (beancurd wraps) were more like little sushi dog kennels, because of their open sides.
As for our starters the chicken karaage was coated in a very thin light crumb/tempura hybrid, it kept the chicken really juicy and succulent. Extremely tasty and good sized portion, which wasn't greasy at all, but that is to be expected with Japanese food.


My main was marinated sashimi scattered on rice, extremely tasty and very healthy. I was not really sure what to expect when I ordered it, but as I love salmon I was happy to go with whatever turned up. It was really fresh and clean tasting the salmon was chunky and they didn't scrimp on the portion either. The pickled ginger they provide is not the usual peachy pink coloured stuff most sushi restaurants provide, more like a pale yellow colour, more like actual pickled ginger should look. I have to say it was much better in taste, delicate and more refreshing.


Rich loved his katsu curry, definitely one of his most favourite dishes to order when we go for Japanese cuisine. This one was very fragrant, the sauce was much lighter than some katsu's and the crumb on the chicken was so crispy but without drying out the chicken. There could have perhaps been a bigger portion of rice as there was a lot of sauce left over after Rich had finished his meal. We ordered our desserts, although we were feeling pretty full already. Rich went for  Yuzu cheesecake and I went for the green tea ice cream as I've always wanted to try it, because it has been enthused about by so many of my friends.
Yuzu tastes a lot like grapefruit so the cheesecake was pretty sharp in places and slightly bitter. It was quite a generous portion but not something I would have gone for personally. Sadly my green tea ice cream was all crystalized so had to crunch through a scoop which compared to the lovely soft Marshfield ice cream we had sampled the week before it was a bit of a let down at the end of the meal. I could see myself really liking green tea ice cream as the flavour, when I could taste it through all the ice, was really lovely.


On the whole was impressed with the food at Noa, apart from the dessert, the set menu was under £20 each  and the sushi was standard price for what you would pay in most places. I am keen to return to try some of their non sushi dishes as I have a feeling this is where they really shine.
Posted by Abby and Rich at 16:35