Last Tuesday I had arranged to have a farewell dinner with my friend Elly, someone I have known since I was four,  who was leaving Bristol for London. Elly is a big fan of all things Spanish, having spent some time living over there, so she chose Bravas for her farewell meal. This was my first visit to Bravas, shockingly, and even though we showed up before 7 it was already pretty busy. We found a spot in the window and swiftly ordered two glasses of red and some bread and olives to help us decide what tapas to pick. 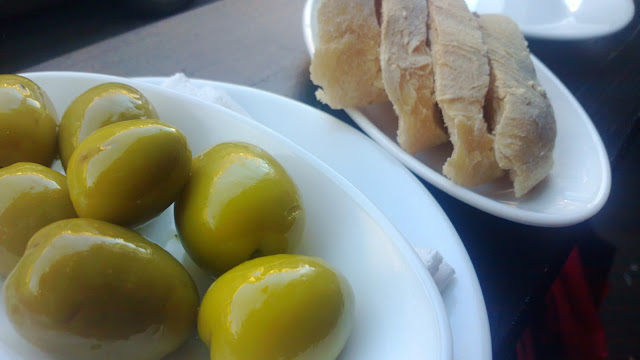 It was difficult to restrain ourselves from not ordering everything on the menu it all sounded so delicious but in the end we picked five dishes to share and sat back to wait somewhat impatiently as the smells of food around us only increased our hunger. The tortilla with aioli was the first to appear swiftly followed by the  Zamorano cheese with membrillo and patatas bravas, you couldn't not order bravas whilst dining at Bravas after all.
From these photos I don't think I need to tell you how good these tapas were, but I will. The tortilla was rich and creamy, improved even further by the wonderfully fresh tasting home made aioli. Zamorano is a sheep's milk cheese from Zamora in Spain and is very similar in taste to Manchego, the membrillo, or quince jelly that it was served with topped off the richness of the cheese very nicely indeed. The bravas were served as large slices of potato, like thick crisps with a tomato and pepper sauce this was different but it was just as nice in my opinion.

It was hard to pick a favourite, but if pushed I think I would say it was the Iberico pork, cooked on the grill. They were the most tender and succulent pieces of meat I have had in a long while, simply seasoned with salt and pepper, from what I could tell, it melted in the mouth with barely a couple of chews. I was glad we chose an unfamiliar tapas dish, the white beans with leeks and fino was wonderful, slightly sweet which went perfectly with the leeks. Elly and I could not resist pudding there were four choices all as delicious as the last but eventually we settled on the truffles and the rice pudding. 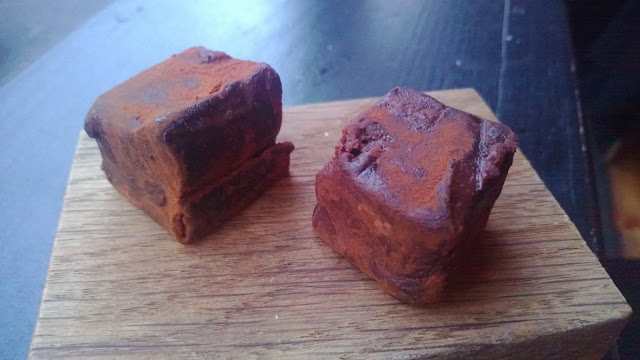 Rice pudding is a real guilty pleasure of mine but one I rarely indulge because most people I know don't like it enough to share with me. When I make it for myself I often flavour it with brown sugar, nutmeg and cinnamon, always cinnamon, I am a total addict. Bravas really stepped up to the plate with their rice pudding, it was flavoured with orange and nutmeg and was the ultimate in comfort food. The truffles were as good as they looked but you definitely only needed one each as they were very rich and decadent.

It was a perfect send off for Elly with all the food being superb. It made me anxious to return to Bravas as soon as I can, and I would urge you all to do the same, except then there would be no room for me. The food was so good I feel I want to keep it for to myself. Booking is definitely advised for more than two people so check out their wine list and sample menu on their website.