A Trip to Cyprus with Cyprus Kebab House

The other week Rich and I discovered a secret little gem of a restaurant and in some ways I am loathed to tell you anything about it because I want it to remain a secret to those in the know. However because I am not an unkind being I have selfishly decided to share my findings with you.  So Rich has been going through a bit of a Greek food phase and after a little searching we tracked down the Cyprus Kebab House at the bottom of St Michael's Hill.  A kebab house? I hear you cry, yes that's right, a kebab house, well kind of. As you walk through the door you are greeted by the standard kebab house set up, however at the end of the counter there are a set of velvet curtains and if you walk through those you find yourselves in a little cosy restaurant.

It is pretty dark inside with lots of candles dotted about and a love letter to Cyprus in the paintings on the wall. It may look a little rough round the edges in terms of decor but I felt that it only added to the restaurant's allure and we both started to feel as if we were miles away from Bristol having a meal out whilst on holiday.
We decided to share two small starters of halloumi and hummus to begin with whilst opting for the classic kleftiko and the mixed kebab for our mains.  A lovely older couple run the restaurant and the service was friendly yet quiet, all in all really rather charmingly old school I liked it.  The starters didn't take too long to make an appearance and in tandem with a rather large basket of warm pitta breads. A tasty hummus and some perfectly grilled halloumi, not massive portions but enough to wet our appetite for the main courses. 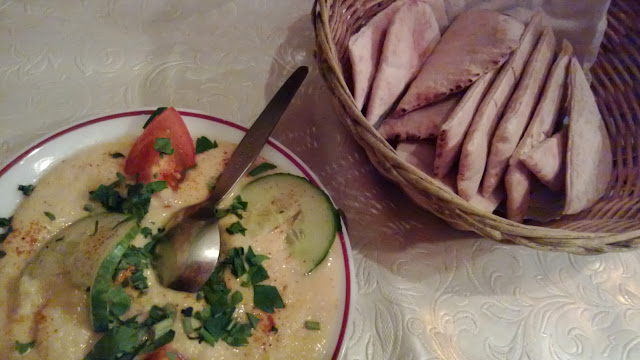 As you can see from the photos the mains were gigantic. If you do not have a big appetite then there isn't much point in coming here my kleftiko was a whole juicy lamb shank which fell off the bone beautifully and was very well seasoned.  I gave it my best shot but even I had a potato and a bit of lamb left over by the end it was a monster of a main. Rich's mixed kebab was also glorious the home made spicy sausage and minced pork kebabs being the highlights but again he was beaten by his main.  All mains are around the £10 mark which I think is astounding value for money. Stupidly we decided to go for a pudding as well,  despite being stuffed we picked the baklava and a rum cake. The desserts were alright but nothing astounding so if you feel tempted but are too full you're not missing the best dessert on the planet.

The Cyprus Kebab House was a genuine delight it was such surprisingly good food that we can't wait to return, although it did take us two days to recover from all that food. There was only one other occupied table when we went on a Thursday evening but I have heard that the weekends get pretty busy. So now that I have shared that secret check it out, but try not to tell everyone all at once!
Posted by Abby and Rich at 11:52