Chin! Chin! has been a fixture on St Michael's Hill for some time. Neighbours with Beerd, it offers up small plates of modern British cuisine. I am not the biggest fan of small plates, I often find them slightly underwhelming and unsatisfying. Spanish food is rich enough to warrant a tapas sized portion, when it comes to British cuisine small plates of veg or meat or fish often leave you wanting more. Not to mention the often lack of value for money for meat or fish most places offering up dishes at the £7-8 mark.

The evening we went to Chin! Chin! last month was a cold one, I was glad to be welcomed in from the cold to a cosy restaurant with vintage decor and lots of twinkly lights. Jo turned up to join me at the table a few minutes later. I personally would remove a couple more of the tables as it did feel a little cramped on our table for two that was right in front of the toilet. The menu has some tasty sounding dishes on it separated out into 'from the farm' for meat dishes and 'from the sea' for fish ones. We went for some olives and nuts to go with our bottle of tempranillo whilst we decided what to choose. The wine was really wonderful went nicely with the toasted nuts, I personally found the olives a bit mushy for my taste.

After much deliberating we decided to opt for the slow roasted pork belly with rhubarb relish, spinach and chickpea falafels with harissa and yoghut, pheasant with pea shoots, roasted cauliflower, squash, spinach and toasted almond salad, salt and pepper squid, beetroot and goat cheese salad, and finally roast potatoes. 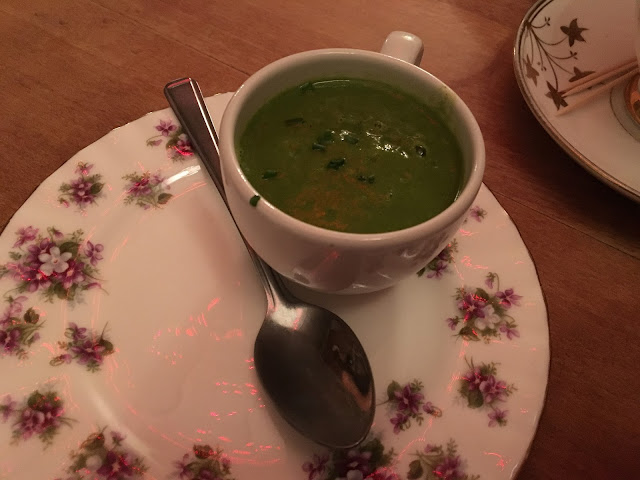 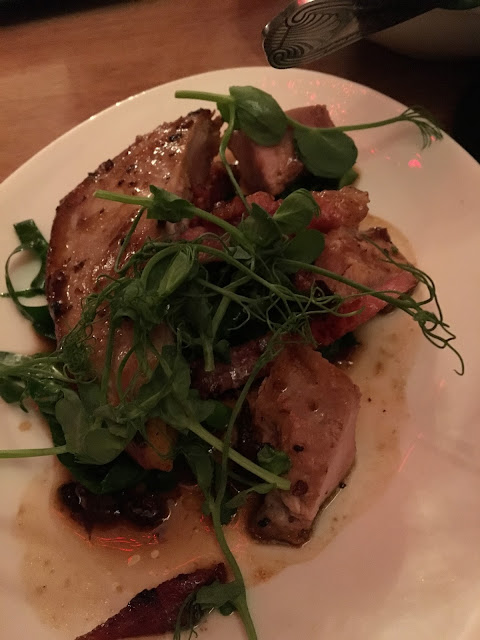 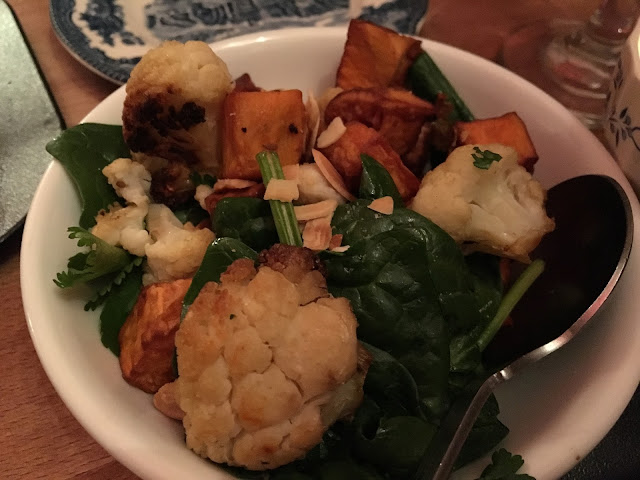 The menus are seasonal so they might differ to what I had on this particular visit. We were brought an amuse bouche of watercress and potato soup which was very smooth nothing mind blowing but it was tasty enough. The small plates started arriving not long after and soon our table was crammed with dishes. To start with the good points. The slow cooked pork belly was really great, it fell apart and the crackling was crunchy, possibly my favourite dish. The pheasant likewise was well seasoned and juicy, they know how to cook meat here. My squid was pretty tasty I particularly liked the dip it came with it was a little different. The roast potatoes were crunchy on the outside and nice and fluffy on the inside, which is what you want from roasties.

The hot vegetable salad dishes of roasted cauliflower, squash and spinach plus the beetroot and goat's cheese were fine. Not overly memorable but not bad either. My least favourite dish came in the form of the chickpea and spinach falafels. They were tasteless. The yoghurt and harissa couldn't do much to save them either, disappointing. We decided to share dessert of spiced plum crumble with cinnamon ice cream.


The crumble was pretty light and not too sweet. But I missed the stodgy proper crumble element, crumbles need that gooey, chewy bit between the fruit and the crunchy top. I left feeling a little underwhelmed by Chin! Chin! some of the dishes were tasty but mostly I found the menu a touch uninspiring. It certainly didn't change my perceptions on small plates. I know that Chin! Chin! is a favourite of many in Bristol I just personally didn't find it as good as I wanted it to be. To find out more about Chin! Chin! visit their website.
Posted by Abby and Rich at 11:56