After Work Tea at Papaji's

Last week Jayne and I wanted to go for tea and cake after work around Whiteladies, trying to wean myself off Deco Lounge I suggested Papaji's as I had never been. I was excited by the fact they had 74 teas to choose from, although I wasn't sure what the cake situation would be.

When we walked in it did feel like more of a bar than a tea house. I think the balance of a cafe/bar is a hard one one to get right. The Lounges get the relaxed cafe/bar atmosphere just right and Hermanos on the Triangle is almost there I am just not entirely sure about Papaji's. Having said that the cocktails we passed on the way in looked really good and I love the huge wooden tea chest they have behind the bar.

When looking at the menu we noticed that afternoon tea finishes at 5pm, it was now 5.30, could we convince the nice man at the bar to work around this rule? Papaji's serve Glenburn Teas chosen and looked over carefully by their Tea Master Andy Dodd, so we knew we were in good hands. After deciding to go for Earl Grey (Jayne) and Red Chai (me) we were told there were no more cakes left, which was somewhat disappointing, however 5mins later the nice man returned and said he could do us a couple of scones with jam and cream. Tea date was saved!

Although the tea took a while to arrive, expert brewing I imagine, when it did the smell of mine alone made me smile the description in the menu for Red Chai was:A mean rooibos based chai recipe blended with aniseed, black pepper, cardamom, cinnamon, cloves & ginger pieces." Some people who know me will already be aware that I am a cinnamon junkie so this was always going to be my first choice. I had milk and sugar in mine  and as you can tell from the photo the result produced is perfect golden colour cup of tea, completely joyous. Both Jayne and I were not disappointed by the quality of the tea it was so well brewed that I am already craving my next Red Chai hit. 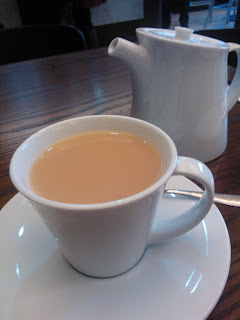 The scones were warm when they arrived and a true delight very light in texture and the jam was a good quality raspberry. As you will see from below I am a jam then cream girl, don't judge me, I think it looks and tastes better, much to my mum's constant disagreement. Both the tea and scones definitely perked us up after a day 'at the coal face'. 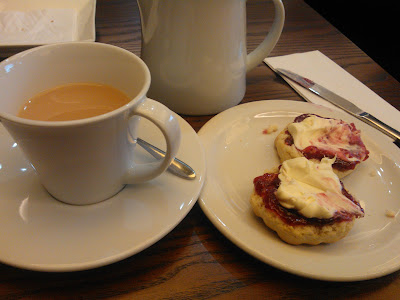 I was really pleased by the high quality and taste of the tea and scones from Papaji's I just think at the time we went it was a bit transitional and considering they market themselves as a tea house (albeit part time) it definitely felt more like a bar, that specialised in tea. But I will be going back for more tea, and later on in the evening, cocktails. I also noticed for Rich they did Asahi beer on tap, and a lovely garden in which to enjoy it in when it warms up a little more. I shall do an update on the cocktails when I get to them. Visit the Papaji's website here.


Next post this week hopefully will be on our visit to Beerd on St Michael's Hill.