Friday it was finally time to enjoy my second Eat Drink Bristol event. I had chosen the 5 course a la carte menu from Ronnie's out of all the great choices available. I was so glad I did because it turned out to be some of the tastiest food I have had in a good long while.

Rich was unfortunately too poorly to attend so our friend Phil stepped up to the challenge and continuing in the weather theme for the country we arrived, rather chilly to the giant tepee. Before I continue I must add how difficult a process Amiando, the ticket company used to set up this event, made of actually attending the event. Even though I had paid for my tickets I had been left off the list, apparently I was not the only person to have this happen to. I only found this out when I rang The Muset to find out what time I should show up on the evening, as required to do by Amiando. Luckily Ronnie himself sorted out squeezing Phil and I in on a table and the staff could not have been more sympathetic.

The tepee looked beautiful once again, there seemed fewer tables than when we went for Sunday lunch and the atmosphere was very relaxed. After sipping my large glass of Malbec and chatting to Phil the food began to arrive. Everyone was brought an appetiser of garden pea soup with soured cream foam, this was really delicious really fresh and brought the best flavour out of the peas. 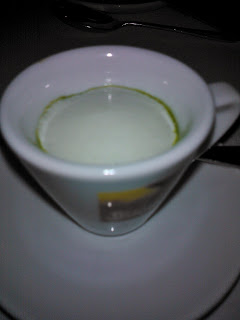 We then had the difficult task of choosing our starters and mains, although the main for me was no contest I was going for Mussel End Farm lamb, herb crust, leek & onion compote and dauphine potatoes. I mulled over the starters with Phil, whether to go for the duck rilette: duck speck, black truffle mayonnaise and pickled wood blewits or the wild mushroom risotto with Champagne. I have a bit of thing for mushrooms, but mushroom risotto is rarely done well in my book. It often comes out bland and very disappointing, I put my faith in many a restaurant hoping this time that they will come through for me when I order it, it rarely does. Tonight however, I was feeling confident of a good result, so plumped for the risotto, whilst Phil went for one of his favourites, scallops.
I could not have been happier with my decision. My first forkful and I was in heaven. If I had left that tepee after just sampling that risotto alone I would have floated home on a cloud. A big mushroom flavour that really made them the star of the dish and white truffle oil to bring out the earthiness. It was rich, creamy and very indulgent, easily the best mushroom dish I have ever sampled, it was the stand out dish for me and I hoped that one day I would get to eat it again. I noted later when checking their menu that The Muset does do a mushroom risotto on it's lunch menu so with any luck this foodie dream could be fulfilled.
Phil's dish, Lyme Bay scallops, pancetta, garlic puree and sage was also a winner. The scallops were meaty, perfectly cooked and melted in the mouth and were beautifully flavoured, although once he sampled my dish, Phil declared he preferred it ever so slightly to his. So far the evening was a delicious delight.
Phil and I both opted for the lamb, as you can see from the photo, it was nice and pink inside, which is how lamb should be. The creamy garlic flavour of the potatoes really complimented the meat, which was wonderfully juicy, the quality of the lamb was superb. The sign of a good meal for me is when you don't want it to end, although you know the plate won't refill itself you try and eat really slowly to savour each and every mouthful. That was definitely how I felt about the starter and main courses.

I wasn't sure how I felt about having two desserts. I am not an overly sweet toothed being, though don't get me wrong a good pudding can really hit the spot, I usually leave most of the sugar eating to Rich, he is quite the connoisseur.  The fourth course was Ronnie's bread and butter pudding followed by a choice of two desserts or cheese. Normally I am a cheese fiend but I was won over by the sound of strawberry sundae with clotted cream ice cream. Luckily for me Phil picked the cheese so I would get to sample a bit of that as well.
My bread and butter pudding some what fell apart so the photo doesn't do the flavour justice. It was very creamy a bit like a creme brulee and bread and butter pudding hybrid, the apricot jam on the top was delicious, which is saying something considering I am not a huge fan of apricots. It was a nice dessert but if I had to pick a course to come last it would be this one, but only because the second pudding was just so good.
The cheese was tasty but what made it was the pear chutney, it was quite unlike any fruit chutney I've had before. I could taste Chinese five spice in it which really worked especially with the blue cheese. Phil was almost positive he had located popping candy in the bruschetta cracker, I thought I could taste it but wasn't entirely sure. It would have been nice to have some sort of indication as what each cheese was and where it was from.

My dessert was very sweet, mainly thanks to the honeycomb but also very tasty. The strawberries were fresh and vibrant without being soggy like they can be in some desserts and the ice cream was beautifully creamy. There was quite a lot of things to try in this one dessert, as I dug down deeper I found strawberry mousse. I think my favourite bit though was the pistachio marshmallow, totally unexpected, wonderfully quirky and very tasty.

My experience of Eat Drink Bristol this time round could not have gone better and I really hope they do another one next year. After having a quick impromptu chat with Ronnie as we paid for our wine I left with that excited buzzy feeling that I sometimes get after a brilliant meal. Although I was sad for poor Rich missing out on such a great meal we are planning on lunch at The Muset on our next day off. For info on Ronnie's Restaurants visit the website here. Reviews to come include our visit to Hotcha, by Rich and our trip to newly renovated Cosmo.
Posted by Abby and Rich at 12:33