The past week has been, to quote Blackadder, wetter than a haddock's bathing costume, Sunday was no different. Fearing a completely waterlogged Queen's Square we walked down in time for 12pm, our allotted slot. There was a lot of waiting around not knowing where we should be, we bought some drinks and waited whilst watching the rain pour into huge buckets at the corners of the teepee. Overall I think the ticketing system for this event has been a bit haphazard, having to ring the restaurants for start times and then not even being on the list for the carvery event  even though my ticket clearly stated April 29th. For a new event this is probably to be expected.

We were waiting quite a long time to get seated and started but I have since learned, once I returned home, that there was flooding in the kitchen. In all honesty I am surprised the teepees didn't collapse under the unrelenting wind and rain, so the staff deserve a complete round of applause for carrying on regardless. 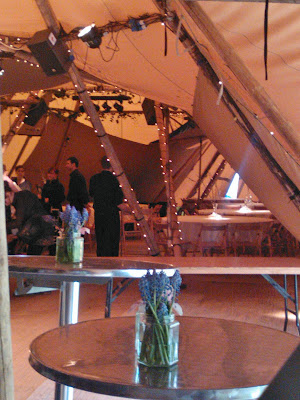 Inside the giant teepee was beautiful, lots of ivy and fairy lights made it feel really cosy and friendly. We were sat on one of the first tables so were called to line up for our lunch first. The Pony and Trap team had cooked us a choice of lamb, beef or pork and a variety of vegetables including cauliflower cheese, red cabbage and honey roasted parsnips. What was nice was that you got a giant Yorkshire pudding no matter what meat you chose. I went for the pork whilst Rich chose the beef which had a wonderful pink tinge throughout.
Rich and I rarely go out for roasts and when we have they have often been a disappointment in flavour or quality, only The Grapes in Clifton have exceeded our expectations with their 24 hour roast pork, although I am not sure whether they still have the same quality of roasts as we haven't visited there for at least a year. My own roasts, especially the potatoes, are worth the couple of hours slog in the kitchen for. This carvery you could tell the high quality of the meat, it was extremely well flavoured and perfectly cooked. I did think they were a bit stingy with the meat portions though, I got two small slices of pork, Rich fared better, but not by much. The roast potatoes were nice but not astounding and the veg was nice and crisp. The biggest surprise for me were the honey roast parsnips, not being a big fan of parsnips, I really enjoyed mine.  One of the diners on our table managed to charm his way into seconds which made him the secret envy of the whole table, I would have loved to try a slice of each meat. It was a nice roast, but I did think I was going to be bowled over.
Lunch came with dessert which I wasn't expecting so it was a nice surprise. The choices were Lemon Posset with Tea soaked Prune or Apple and Rhubarb crumble. The plus point to the crumble was the rhubarb was definitely the best cooked rhubarb I have experienced. The crumble part was terribly dry, I did not even finish mine. Rich said the lemon posset was refreshingly sharp and cleansing.

I think for £20 they should have thrown in a glass of wine or something as for a roast it was a little steep in price, plus the cheapest bottle of red wine was £18. I really love the Eat Drink Bristol concept and hope that they do the same thing next year because if they tweak a few things it could be the envy of the South. I have a feeling I will have a better experience on Friday when I go to the Ronnie's five course taster menu, which I am really looking forward to.