Best of the Wurst: Berlin Bites

Our 4 night trip to Berlin with friends was a wonderful and special one, although probably not great for our livers. Berlin is a very interesting city, for me it did feel like stepping back into a time warp, the prices were about 10-20 years behind us and some of the areas resisting gentrification would not look out of place in 1980s Britain in my opinion.
It is an extremely charming city and we all fell completely in love with one bar in particular. Van Gogh's by the Friedrichstrasse S-bahn stop was in all ways, absolutely perfect. A classic cocktail bar, wall covered with reprints by the artist, piano lodged in the corner and a good sized cocktail menu but also some nice beers for the traditionalists. We also enjoyed Meisterschueler bar (where we got engaged) where we went on New Years Eve it had a great selection of cocktails and a beautiful view of the river Spree and all the fireworks that went on.
During this trip and the many weeks leading up to it had led to one word being mentioned more than any other and that was wurst. Puns like "it was my wurst decision" and "it was the best of times it was the wurst  of times" populated our pub trips pre Berlin and haunted my waking moments whilst in Berlin, thanks mainly to Rich and Bud. But wurst is absolutely everywhere, currywurst stands populate every street corner, and if that's not enough every 4th shop was also providing access to Berlin's favourite on-the-go food. Having said that the quality and taste of these sausages was amazing, they know their wurst and they do it superbly so we did eat rather a lot of them.
Currywurst, invented in 1949 in Berlin, is something we had not tried before and the sauce is so simple (or so it seems from watching the stalls make it up) but really delicious. Curry powder infused ketchup, paprika a touch of mustard and more curry powder, sounds like something a student could have knocked up but it totally works. These were a welcome late night snack on New Years Eve after hours of cocktails, a proposal and so many fireworks it felt a bit like a war zone every time you ventured outside.

I imagine being a vegetarian in Germany must be tricky because meat is everywhere, but a friend of ours who had also visited Berlin (and was a veggie) said she mostly survived on the many Vietnamese street noodle vendors that populate the central districts. The meat quality in Berlin, and I imagine the rest of Germany, we found to be superb none more so than when we went for a lunch steak for Bud's birthday at one of the Blockhouse restaurants. From first glance it seemed sort of like the Angus Steak Houses you get all over London, but I couldn't have been more wrong. This was a different league.
Exceedingly good steaks, perfectly cooked and well flavoured. Each steak meal comes with a salad, a jacket potato topped with sour cream and chives and a piece of garlic bread. It was easily in my top five steaks I've ever had, I doubt you would get this level of quality in a chain steak restaurant in the UK. So if you find yourself in Germany Blockhouse has 32 restaurants scattered around the place, fancy a steak definitely give this a try.


Whilst we were over in Berlin we also took in two sushi restaurants. Goko on New Year's Eve and Ha-An on Bud's birthday evening. Both differed wildly in quality and price. Goko was definitely on the pricey side with it's actual sushi. A very traditional sushi restaurant specialising in sashimi. The sashimi sets were priced fairly high the most expensive being 20€ for 9 slices, so most of us ordered a salmon or chicken don and some side dishes to share. Goko did not impress me, the sashimi that Rich and I had was a bit mushy and at 40€ per person in total it was not cheap.
Luckily two days later we stumbled upon a gem of a Vietnamese/Japanese joint restaurant called Ha-An in the Prenzlauer Berg district which was truly delicious. Definitely recommended if you go to that area and the food is very reasonably priced and the service friendly. Rich and I shared a 2 person sushi set for 25€ which came with a bowl of miso soup, and optional tea, if you don't fancy the tea they will happily swap it for a bit more sushi at no extra cost, which we accepted. The sushi was some of the best I've ever had. The classics were done well but they also through their own version of Bristol restaurant Obento's famous dynamite roll but rolled in panko (Japanese breadcrumbs) rather than fried in tempura.
We also ate lunch at a restaurant in the Sony Centre which doesn't worth mentioning as it was very poor indeed and expensive so avoid Corroborree we went there in desperation and regretted it afterwards, the food was awful and the service was surly. Our last German morsel was stopping for a bite of apple cake whilst waiting to get the train to the airport. It was rather delicious even if it turned out to be a cake/pie hybrid. 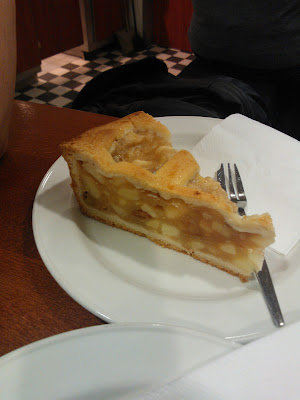 So all in all a great foodie trip, although very meat based, plus I came back with a ring on my finger, which is always nice. I also returned with an addiction to Berliner Weisse, especially in green, a wheat beer with flavoured syrups the green one is made from Woodruff and is extremely lurid in colour. I am looking forward to returning to Berlin and exploring more of Prenzlauer Berg where all of the quirky bars seem to be if you have any recommendations for our next visit please send them to us.
Posted by Abby and Rich at 11:48