Christmas at the SS Great Britain

Other than the suspension bridge, Bristol's other most recognisable landmark is the SS Great Britain, and both by Brunel, well if you're going to showboat using an actual boat (ship to all the salty sea dogs reading this) is a good way to go.  Our Christmas lunch this year was on board the first class dining saloon and the chance to roam about the ship after eating all we could.  The dining saloon was decorated with lots of ivy garlands and looked lovely alongside the gilded edges of the room.  This event was advertised as a Dickensian Christmas onboard the Victorian ship so some of the diners, not part of our party, dressed in Victorian fashions to enjoy their lunch, which gave a lovely feel to the meal. 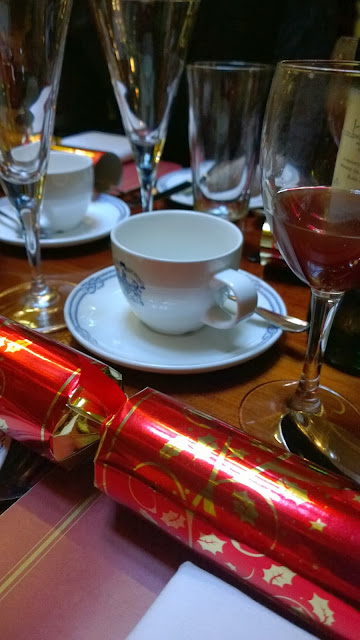 We were greeted by a glass of mulled wine to cheer and warm us out of the damp and very grey outside, my first mulled anything of the season and it was pretty nice if a touch too sweet. The three course menu was mainly traditional Christmas fare, the starter, a white onion and cider soup with crispy sage and garlic croutons served with a warm roll and butter.  For me this was the weakest course of the three the croutons were plain and nothing more than toast in soup, but the soup itself was actually rather nice. 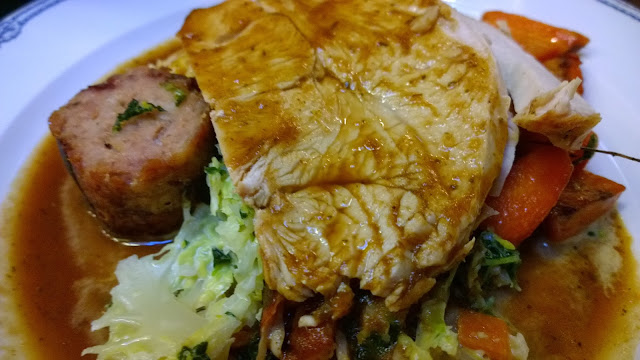 The turkey was really nice and juicy helped by a flavoursome gravy although the standout was the sausage stuffing on the side, it was delicious. Even my team mate Becky who is not a big fan of roasts praised it highly. It was a shame there were no roast potatoes but actually the potato and parsnip mash was creamy and smooth and a much lighter option, which considering we still had pudding to go was a blessing.  Pudding was listed as a mandarin creme brulee with Christmas spiced biscuits.  It was a great creme brulee and although I was concerned about the mandarin flavour being too strong it was really subtle and gave it a lift. Most of us dipped the spiced biscuits in the creamy brulee when cinnamon filled biscuits met orange spiced cream it was heaven.
After dessert we were all stuffed but that didn't stop me from having a little bite of stollen when the coffee was brought round. After lunch we decided to stretch our legs and Sharon and I had one goal and that was to find the dressing up box, the staff on the ship were very friendly and we located it with a minimal amount of fuss. 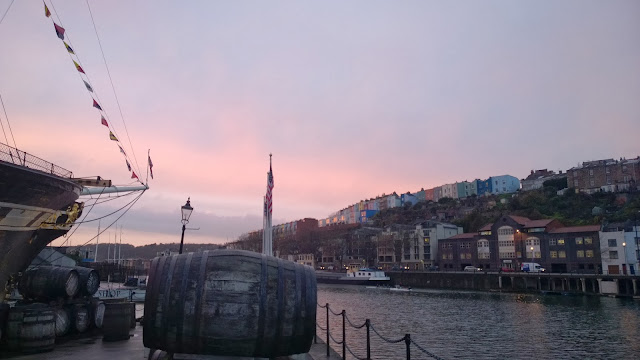 So a rather nice day immersed in all things SS Great Britain and it did have a nice Christmassy feel I would recommend this event to those looking for a new direction to take the office Christmas lunch in. Hopefully the team on the famous ship will give it another go next year.  If you want any more details or anything else about the SS Great Britain visit their website.  I think this might be my last post of the year, unless I end up anywhere else before Christmas so Merry Christmas all and thanks for supporting the blog it is greatly appreciated. Now go stuff yourself with all the turkey and booze you can muster.
Posted by Abby and Rich at 12:31