The final countdown to Grillstock has begun so Joe from the Bristol barbecue team Social Smokers UK gives us the low down on his barbecue extravaganza weekend.

The sun is shining, the weather is rejoice, make you want to drink beer smoke some meat… well something like that.

Yes the weekend of the 25th May will go down in history as the British summer of 2012.  I can’t see us having another weekend like that, it was seriously hot.  And we, the Social Smokers, were in our element.  Matt, Jon and I spent the whole weekend in the garden, cooking.

This weekend we were practising for the chicken and beef brisket rounds of the King Of The Grill competition at Grillstock. 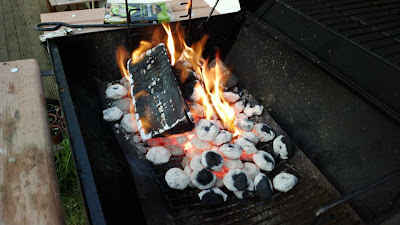 Saturday
First up, a sweet BBQ chicken with a citrus kick! We applied a rub of smoked paprika, salt, lemon zest, garlic granules and black pepper.  The oils in the lemon zest really lift this rub.  With the rub applied they were placed in a tray and put in the smoker at around 350F for an hour and a half.

When crispy and almost done they were dunked in a lemon and mustard BBQ sauce.  The dunking sauce was made with;
Onion,
Garlic,
Olive Oil,
Ketchup,
Sprite, (yes you read that correctly
Lemon Juice,
Light brown sugar and Wholegrain Mustard.

The chicken was placed back in the smoker for another 30 minutes, this time straight on the grill grates.  The results were very good.  The meat was juicy and the flavour was sweet and fruity.  The skin could have been crispier but that will come with practice.
We had a few drumsticks left over so we decided to make the notorious ‘Death Legs’.  A super-hot Chilli chicken using some of the world’s hottest chillies.  They did not disappoint, the Trinidad scorpion Moruga chilli gave an instant heat whilst the 7 pot chilli had an intense long burn.

Sunday
Roast beef is a traditional Sunday staple in Britain.  We however decided to cook our beef Texan style. Beef brisket is a tough cut that requires a lot of cooking.  We smoked the beef at around 220f for 8 hours.  The rub was a basic BBQ rub of onion and garlic powder, paprika, cumin and oregano, sugar, salt and pepper.  We smoked it with oak chucks that were soaked in water to stop them from burning too quickly and basted it every hour for the first 4 hours.
The mop sauce was made using sugar, vinegar, chilli flakes and dark beer or ale.  After 4 hours the Brisket was wrapped foil and cooked for a further 4 hours. We served the brisket with rolls, coleslaw and BBQ beans.

For me brisket is the number one BBQ food.  If you have a kettle barbecue I urge you to try cooking it.  Buy an unrolled brisket with a good amount of fat on the top as this will baste the meat during the cooking process.  Use a decent coal, bricket or lumpwood, not a cheap coal as it will have chemical binders in it which will ruin the flavour of the meat and all your hard work.  I found this out recently when I cooked a lamb shoulder using a budget charcoal from B&Q.  Everything tasted of petrol.  Barbecue Fail!

You can buy a good coal and a wide selection of wood for smoking at hotsmoked.co.uk.

Thanks for the update Joe it looks amazing. Want to follow the progress of this Bristol barbecue team check out their facebook page
Posted by Abby and Rich at 11:28