On Sunday we returned from a week in Valencia. It was hot, a high of about 34 degrees during the day and 29 degrees at night, luckily Spain is well equipped with air conditioning everywhere which helped us cope with the heat.  Valencia is a beautiful city lots of old and new mixed together, it's not overly big but there was enough to keep us entertained for the whole week, bars aplenty that's for sure. I had two stand out meals there one was paella for lunch at a restaurant on the beach and some tapas at a local restaurant five minutes from our apartment. However we also got to sample some really great vegetarian food at a restaurant in the popular Carmen barrio.

So all the tips and guides we had gathered before we went away said that paella on the beach front for lunch was a particular highlight so this flew to the top of my list, well one behind going to the giant aquarium of course. We had heard that La Pepica was a good place to go for paella, they proudly claim how Hemmingway used to hang out there and have lunch as well as Lauren Bacal, anyway this seemed promising so we headed down there to sample. At 2.30-3pm it was still pretty busy, the Spanish way, don't you know, and to make things easy four of us ordered Paella Valenciana, when in Rome after all, and Abi our vegetarian travelling companion chose the tortilla. La Pepica has an old fashioned charm about it, all the waiters are over a certain age, ultra polite, full on tablecloths and photos of all the old movie stars that have visited them over the years scattered across the wall.
The Valencians have a bit of a rule when it comes to their paellas, basically for true authenticity in their eyes you don't mix the meat and fish together in a pan. If you want fish in your paella you have to order a seafood paella (paella de marisco), Valencian paella is meat only, although in other parts of Spain mixed paellas are pretty popular. So our paella was made up of chicken and rabbit and it was heaven. I cannot say whether this is the best paella in Valencia as I only tried it here but it was seriously delicious and our pan for four people was a very generous amount, we almost finished it but there was a small spoon or two left over, definitely recommend La Pepica if you are in Valencia. Check out their website for a little more detail.

Our next food foray comes in the form of Villaplana, a local restaurant near our apartment in the Angel Guimera area. This was probably the best meal all round that we had whilst we were away. Phil, Rich and myself were feeling peckish so decided to take a gamble on this place as it looked somewhat busy and the menu sounded delicious. Walking inside it feels a bit like a deli/restaurant hybrid, bright lights and branded everything, but if meals in Portugal have told me anything, the brightest lit restaurant can yield the best meals. The Sports Cafe near my parent's house in the Terras de Bouro region of Portugal serves up some of the best food I've had whilst on holiday for under €10. Anyway I digress at Villaplana we ordered an array of tapas dishes and a wild card of pork loin to share among us which came with potatoes.
All simple food at family run Villaplana but beautifully cooked and so tasty it really lifted our spirits after the first meal we had, at La Taberna de Marisa was disappointing. So disappointing I am not even going to post any photos, the food was ok but so expensive so wouldn't recommend there are much better options out there. We were fed all this food for under €50 for three of us which included drinks. To get the feel of what the lovely Villaplana have to offer check out their website, albeit in Spanish.
I couldn't leave Spain without trying some Horchata, a drink made from tigernuts, sugar and water, although in Latin America this recipe, which varies widely, is often pepped up with cinnamon or vanilla. Often eaten with cakes called fartons I liked it but not massively, it tastes like hazelnut and almond milk mixed together with sugar but has a slight bitterness, it was pretty refreshing in the Valencian heat though so I can see why people flock to all the Horchaterias populating the city.

In my search for the best croquettes the nicest we sampled came from a little cafe bar near the Cathedral called The Lion Bar (El Leon Bar) with a lovely owner he was so friendly, kind and was able to answer all of Abi's questions about the true vegetarianess of their veggie paella. I had a lovely refreshing salmon salad for lunch but it was the ham croquettes, rolled into balls as appears to be the Valencian style, that really shone in this place. The veggie paella was made with tofu and seaweed as it's main ingredients and looked really tempting. 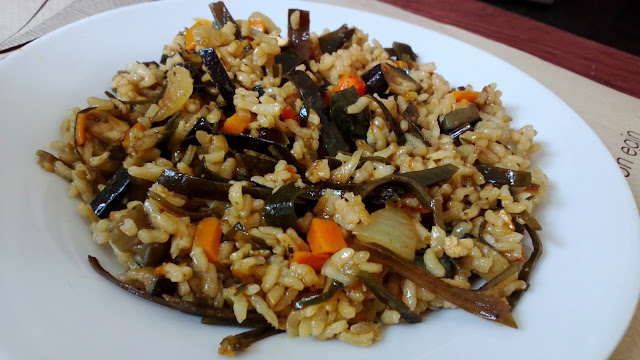 Spain is not a country that a lot of vegetarians would find plenty of choice in, however we made a concerted effort one night to find a vegetarian restaurant so that Abi would have a choice of something other than potatoes as her main meal. We had read about La Tastaolletes in Carmen and decided before we went to Jimmy Glass jazz bar, well recommended by the way, for some local jazz to see what a Spanish veggie restaurant would have to offer. Turns out quite a lot, as even Vegans are well catered for here. Rich and I decided to share some dishes between us and went for the crumbed goats cheese, falafels and veggie croquettes and we all shared a couple of bowls of hummus.  It was some of the best hummus I've ever tasted, so smooth but really well flavoured, the goats cheese was probably my favourite thing although the croquettes were nice. The croquettes came in two types, spinach and ricotta or grated carrot and apple, something a little different but with the garlic mayonnaise that came with them it worked well. The falafels were not as good as Bristol's Falafel King, but that would be difficult, prices in La Tastaolletes is on the more expensive side for Spain but nothing offensive this is a great option for hungry vegetarians looking to have more choice.
As you can see we ate rather well in Valencia it was a beautiful city, very chilled and friendly so recommend it to have the best of both worlds with beach and city combined. Luckily with all the nice weather Bristol has been having coming back to sunshine meant I didn't feel so sad leaving my holiday behind. In the mean time I leave you with a few more views of the city.