A Surprise Lunch at Turtle Bay

The other Friday just before 12 I had my uninspiring rice lunch sitting next to me I was contemplating when to take it upstairs to accompany my current read when in swept in our head of division announcing he was taking us all to lunch.  There was a brief interlude while people decided whether to opt for for 4500 Miles from Delhi or Turtle Bay, luckily for the blog the latter was voted the winner.  When Turtle Bay first opened I heard a lot of varying opinions on it some good, some bad and some middling, I was curious, although my Caribbean food aficionado Becky had said that it was quite nice but not authentic, although i hadn't expected it to be really. Caribbean food can be scorchingly hot and as Rich always says, there is no way a chain restaurant would risk that level of spice in their dishes and have people send it back.

So with all that in mind when I walked in I was particularly impressed with the decor, bright, fun and quite the injection of sunshine into this stereotypical January day. I did wonder whether our large party of 20 would be able to just pop down without booking but we arrived pretty early and within about 5 minutes we were ordering drinks and heading to our seats. 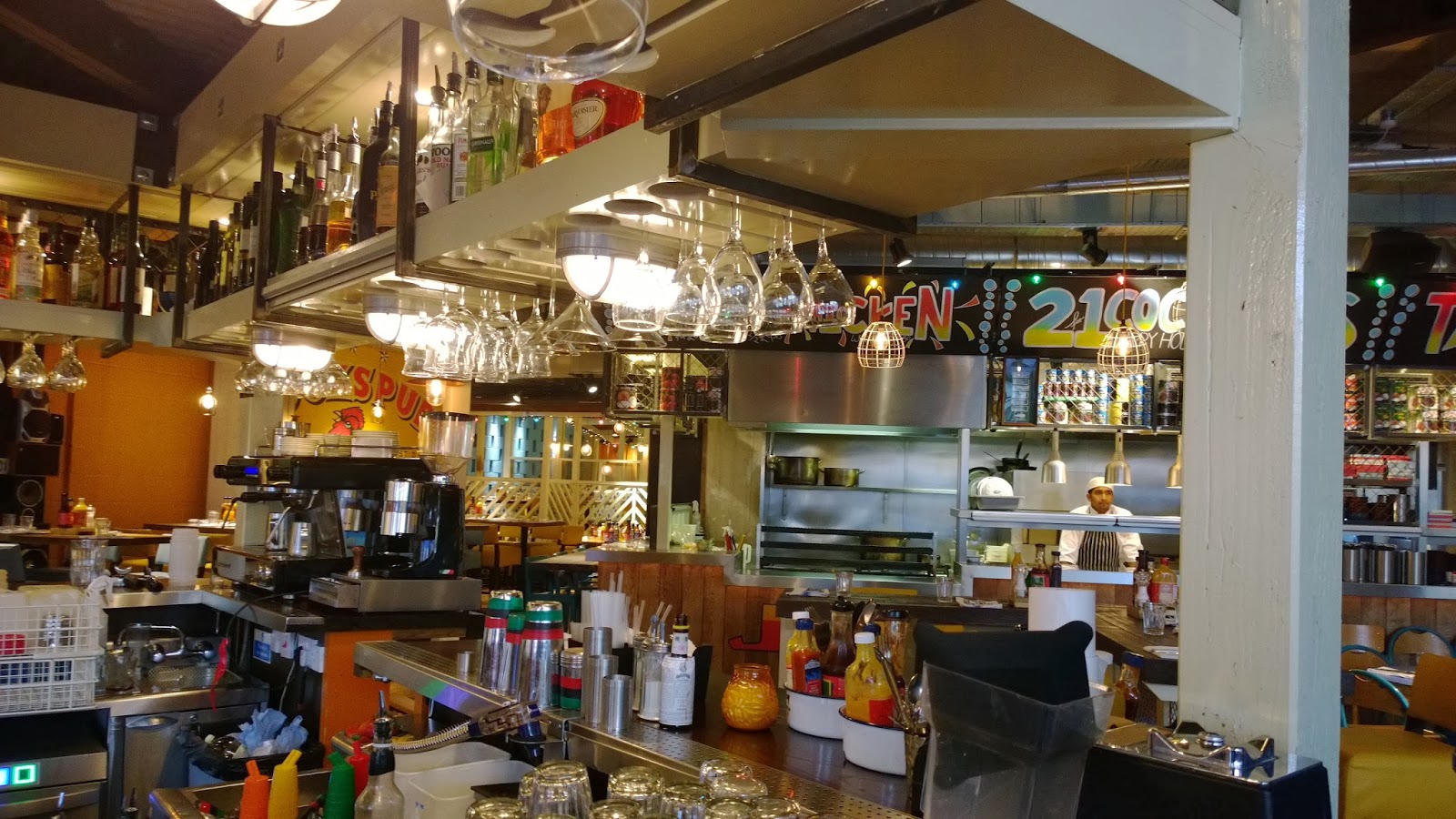 The menu has some Caribbean staples that you would expect like plantain, jerk chicken and scotch bonnets but a lot of items had a twist on it bringing in a few American barbecue favourites. We were all feeling pretty hungry by this point so Sharon and I decided to share a couple of starters the lamb patty and the jerk pit prawns, whilst I chose the street burger for my main.  A number of people had mentioned the cocktails that Turtle Bay did were pretty good and a few people on our table participated but the rum punch cocktail kept wafting over such strong rum fumes that it did put me off a little, but I loved the metal tins they were served in.

The food arrived promptly and I tucked into the lamb patty first, this was nice and spicy and had a lovely comforting texture, and was sad when I had to swap dishes. The jerk pit prawns however were a massive disappointment the sauce you can see in the photos is just oil and smoky, read acrid, tasting oil at that. Plus the prawns were overcooked and tasted of nothing so all that was left was oil soaked flatbread at the bottom of the plate meant to moping up non-existent juice. 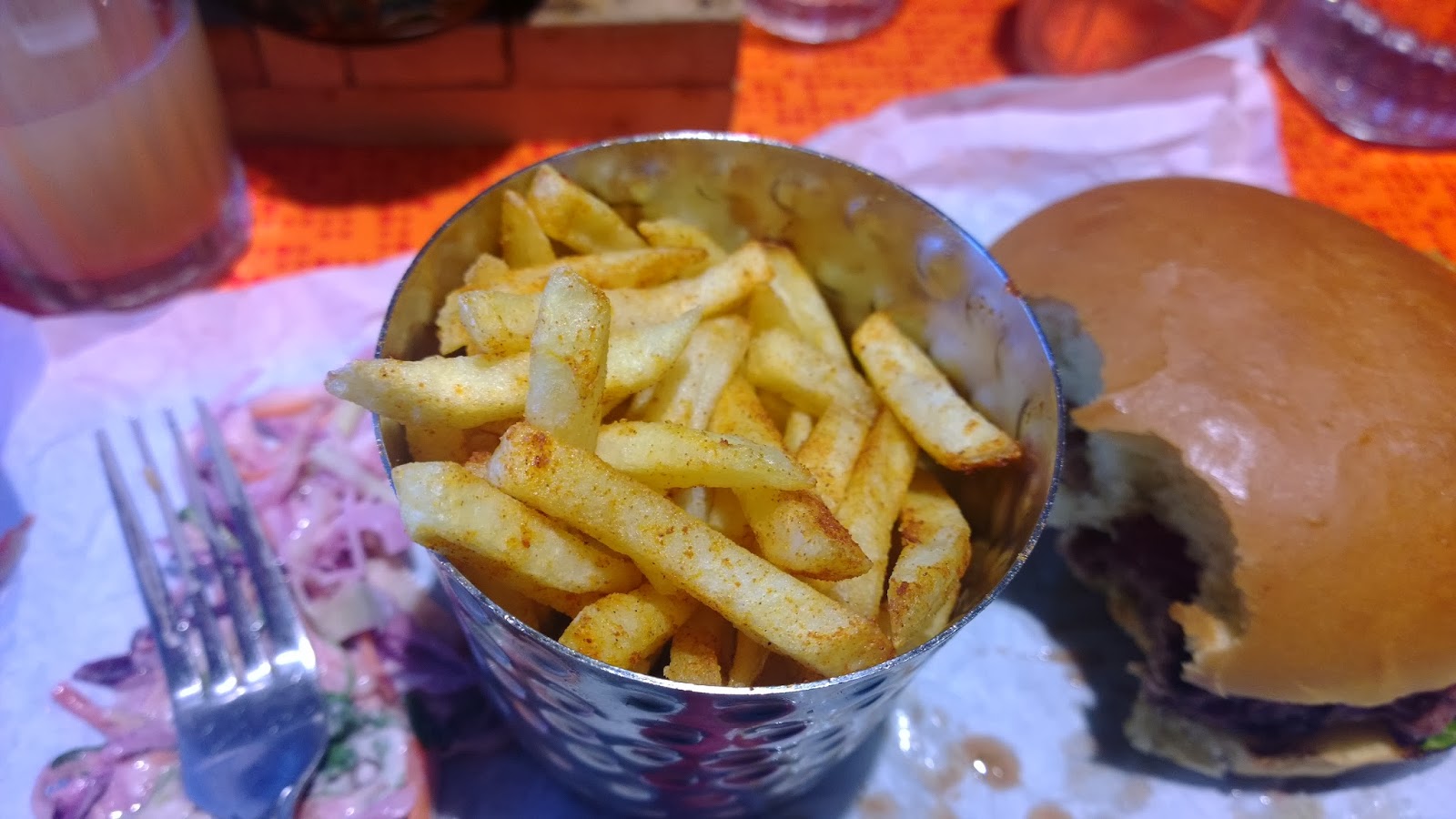 When my main arrived I was pleasantly surprised, for £6.95 this was a generous portion and the smell was a delicious one. The burger came with some caramelised onions and pulled pork on top, the pork was nice and juicy and added some smokiness to the burger. The onions were good but I could have done without the whole cloves resting in among them, luckily I spotted them before I bit down to experience the numbness that biting down on a whole clove can bring. The slaw also for me was a little bitter but I am fairly picky with coleslaw so it could have just been me. On the whole I was pretty impressed with the burger, really lovely flavour and nice and meaty plus the spiced fries were nice and crunchy.

So on the whole a bit of a mixed bag from Turtle Bay, if someone wanted to go here I would join them but I personally wouldn't be in a mad rush to return but there were some nice points.  For a fun atmosphere and a good value lunch it isn't bad at all but for proper Caribbean food Rice n Tings is a great choice. To find out more about Turtle Bay visit their website.
Posted by Abby and Rich at 12:24