A second post from resident barbecue enthusiast Joe about what he got up to last weekend...

At the moment BBQing for me is about experimenting with cuts of meat I've never cooked with before. Last weekend a visited my favourite butcher, Ruby and White's on Whiteladies Road, to pick up a rack of beef short rib.  I was pleasantly surprised with how much meat was on the bone. The cooking, I decided, was going to be similar to a brisket as it was a lean tough cut that would need a lot of cooking. 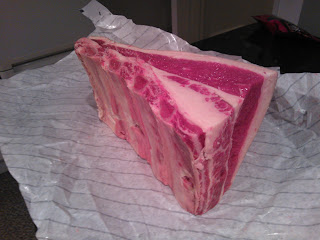 I marinated the short ribs for 18 hours in a dry rub of onion, garlic, tomato, cumin, corriander and paprika powders plus a bit of ground chipotle chilli for some smokey heat. 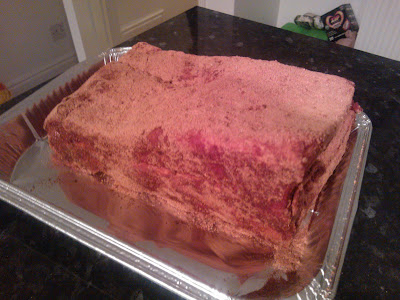 So the next day I got up bright and early to get the smoker fired up.  I filled two chimneys with lumpwood charcoal, fired them up and poured the rest of the coal on one half of the smoker. The idea being that you cook the beef with indirect heat.  That way it won't burn so easily.  On the other half of the smoker next to the coals and directly under the ribs I had a tray filled with hot water to keep the outside of the beef from drying out.

As well the coal I added small amounts of oak throughout the cooking process to add that smokey flavour.  Smoking can be easily over done and over smoked food can taste bitter. Thankfully this wasn't the case. The ribs were cooked for 7 hours at 220f. In hindsight 6 hours would have been enough they were then left to rest for an hour. 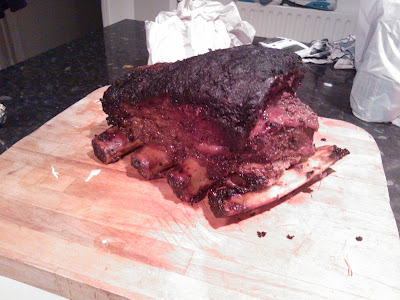 Now I know what you're thinking, " he's burnt it!" but the fat 'fat cap' does go that colour due to the dry rub. I could have used less dry rub to be honest, I think I got a bit carried away. The meat itself was as juicy and as tender as they come. 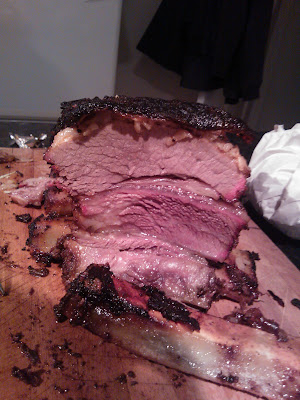 And the left overs made a good chilli con carne. I even have some more left over a Naga curry! Real man food I think you'll agree ;-)

Mmm thanks Joe the photos are making me drool at my desk, not a pretty look. A great second post for the week, a review of tapas at The Old Bookshop in Bedminster and a report on steak with peppercorn sauce to look forward to later in the week.
Posted by Abby and Rich at 14:38