Rich gives the low down on our visit to Toro Pan Asian...

Toro Pan Asian is the latest offering to occupy the space that Beijing Bistro previously sat in, toward the top of Park Street. Although the bistro offered good food at a good price, after almost a decade of service it suddenly closed down. Then, after a long period of being vacant, it was converted into Riva Italian, which promptly lasted all of what felt like a month before also going under. Perhaps opening another Italian on a road where Jamie's Italian, Mamma Mia and about three others are all less than five minutes walking distance was not as sound a business decision as they thought. Regardless, within about five minutes of closing down, someone decided that what Bristol needed more than anything else was another Pan Asian restaurant, and Toro appeared almost immediately too hastily appease our insatiable demands.

Saturday was deemed the day to go and try the establishment out, and the first thing we noticed was that although clean, spacious and bright, the restaurant appeared to look exactly the same as Beijing Bistro and even use the same furniture. A cheap renovation then, and in a way happily familiar, but we were quickly reassured of the venue with the extremely friendly and helpful staff.

The menus offer all the usual choices of food and drinks that you would expect, so the four of us went for beers and soft drinks, four different mains, one starter of BBQ ribs, and three starters of spring rolls. Now, I don’t really want to kick a place in the teeth so close to its opening, and I’m not prone to exaggeration, but believe me when I say that without a doubt the starters were the very worst I have ever seen or tasted. Anywhere.


When you order spring rolls, or even when you get them served at a friends house, you generally expect a dip or sauce of some kind to accompany them, usually a sweet chilli, soy sauce, or perhaps a thick hoisin. Instead we received a handful on each plate dry, with nothing else, and worse than that, they looked and tasted pretty much like the pre-cooked re-heatable ones you’d find in an Iceland party pack (seriously, force yourself to watch the next Iceand advert on TV, they are exactly like that). The BBQ ribs too were appalling. When I say BBQ ribs you instantly imagine and expect four/five hot ribs coverd in a sticky and tasty BBQ sauce, these however were dry and warm, and with a slightly rubbery consistency. I’m not going to say that they had been re-heated in a microwave before being served to us, but if you've ever warmed up meat in a microwave before, and even if you haven't, this felt and tasted just like that.

So with a resounding failure of a first course my optimism levels for the main were decidedly low. We were however pleasantly surprised by the comparative quality of the mains. While by no means great, or even close, some of the mains were quite tasty and possibly even freshly cooked. Sadly my classic favourite, the crispy shredded chilli beef, was not one of them. For a start there was no chilli or even a hint of spice, the sauce was thin and horribly oily, and even the beef itself was fairly grim. The batter for the beef was hard and crunchy, containing very little meat, with some pieces consisting entirely of batter and nothing else. The vegetables tasted okay, and whilst it may be damning with faint praise, but the rice was cooked properly at least.

Abby plumped for the Singapore noodles and described them as being mostly alright, if a little dry, but at least fairly generous with the meat and vegetables. The shrimp though was decidely small, rubbery, completely flavourless and worryingly reconstituted. If the ribs and springs rolls had raised the idea of these being obviously re-heated packets foods, then the shrimp near as completely confirmed it. Our other dining companions fared better with this visit, choosing the trusty classics of sweet and sour chicken and kung po chicken. And their dishes at least looked quite nice, and were eaten with a small amount of enthusiasm, even if the description used for them was a simple yet lukewarm “fine”.
Most of us chose to skip dessert. However one lemon sorbet was ordered, which amazingly was actually very good. Crisp, zesty and refreshing, I should really have ordered one for myself to help clean my mouth of the unpleasantly oily feeling I was left with courtesy of my ‘beef’ dish, instead I relied on multiple cold beers. 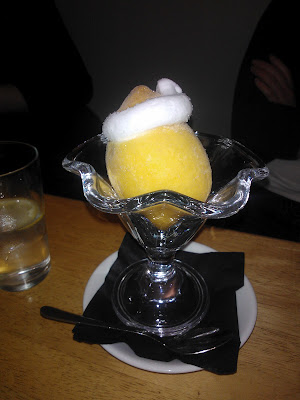 Price wise it’s a fairly competitive establishment with the standard prices you’d expect, £3-5 for a starter, around £6-10 for a main, and drinks slightly more expensive than most pubs or bars. And the service is really very good, with attention and charm winning you over as soon as you walk in through the door, and crucially for me the lack of loud Nickelback and Westlife playing while we ate was a definite plus. The crucially important part of the restaurant though, the food, was frankly dire. Feeling cheaply sourced, prepared, cooked, and presented, it really didn't give the impression of somewhere where you can say they just had a bad day, as food wise it was it just got it all so wrong, but I would be interested to hear if anyone else has a different, and better, experience.

Personally for me, it left a nasty taste in my mouth, both figuratively and literally, left me feeling ripped off, and made me regret not having gone anywhere else. There is a huge bounty of good and great Chinese food in Bristol already, so why someone has thought they could contribute with such an obviously poor and cheap offering is if anything utterly baffling. If you're ever near Toro and fancy a Chinese meal, do yourself a favour and instead just keep walking and go to Wongs, Mayflower, Dynasty, Shanghai Nights or maybe even the new-look Cosmo when it opens later this month. Toro however, for me and without any doubt, is the absolute worst meal and dining experience I've had this year, and in a long time.