Lunch and Cake at Bar Chocolat

Saturday was Rich's birthday. We had already booked Hotel du Vin for dinner with his family and so we didn't really want to fill up on much during the day. We strolled on up to the village for a look around for a bite to eat for lunch. Everyone knows that Clifton Village has about two cafes for every shop you would think there would not be the custom for so many. But weekends are crazy busy in Clifton and nearly every place was rammed.

We settled on Bar Chocolat, formerly Me Me Chocolat, as we noticed it now did sandwiches and panini as well as many delicious sounding cakes. I used to find Me Me Chocolat a tiny bit haughty but they seem to have softened the decor a little, popped some smooth jazz on and employed some really lovely staff in the new incarnation.

The panini menu has a few different combinations but all sounding amazing. I went for goats cheese and salami whilst Rich picked chicken, Parma ham and mozzarella.
The ingredients were good quality the flavours were really delicious, although I would have personally put some sun blushed tomatoes or a chutney with the goats cheese. There was a pleasingly large amount of it but as always it is pretty rich and needed something to cut through.

I definitely would recommend popping in to Bar Chocolat for lunch it was relaxing watching the world go by sat in the window, plus they had some beautiful fresh roses on the tables. 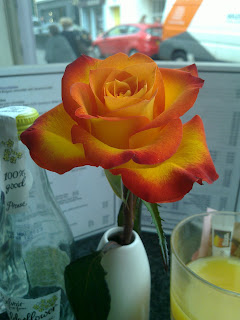 It did seem a bit of a crime going to Bar Chocolat without actually having a chocolate or cake but I have my eye on the Victoria sponge and a hot chocolate with cinnamon syrup and the whole works on top. Might even go this weekend as the idea of a cinnamon hot chocolate is making me drool.

**EDIT** Now I can bring you the results of cake from Bar Chocolat.

Last weekend after getting caught in a downpour after a lovely walk around the downs we made it to the village, myself in particular resembling a drowned rat. As Bar Chocolat was the first cafe we arrived at and keen to avoid more rain we nipped in for a warming drink and a well needed sugar fix. I was keen to sample their hot chocolate so I ordered a regular milk chocolate, with what I thought was all the trimmings and cinnamon syrup. Rich went for their Mississippi Mud Pie whilst I picked the classic Victoria Sponge and in our greed we ordered a scone with jam and cream to share.

The Victoria sponge was pretty good I have to say but I have yet to find one to top my mum's. Every year I request her vanilla sponge with vanilla butter cream for my birthday cake and it is probably my favourite cake, by the way if you are reading this, mummy, you still owe me one for this year, just saying. The mud pie was possibly the richest chocolate dessert I've tried in some time, even for sugar enthusiast Rich, it was a struggle. It was basically a torte the bulk was solid fondant with biscuit base and sides. It was very nice but there is no way you should attempt this cake on your own, unless you are a certified chocolate expert.

The hot chocolate arrived without any of the extras I had asked for and I can only assume it was because of the noisy coffee machine behind the counter which had previously interrupted my order. Ordinarily I would have contested my wrong order but after seeing the mountain of cakes we had to climb I decided that I didn't need any more sugar on the table.

The hot chocolate was probably the best you'll get in Clifton at least if not Bristol, but willing to be persuaded. It was made with actual melted chocolate compared to powder which most hot chocolates are made from in cafes. Really rich and very chocolatey but fairly sweet I was glad I didn't order a large, I have quite a low tolerance for how much sugar I can take on board but it doesn't mean I love it any less.

The scone was pretty nice but not as good as those you get in Lahloo Pantry, and yes I do prepare my jam and cream the Cornish way, jam first. The cream was not clotted though it was a extra thick double cream which was a little disappointing. All in all definitely go to Bar Chocolat, they have lunch and cakes in spades and you won't be disappointed.
Posted by Abby and Rich at 10:27