Lunch at Leong's Legends in Chinatown

This will be a post about my lunch at Leong's Legends in Chinatown, not obviously Bristol but definitely a tip if you like a good meal for a good price and you are in London.

It was the morning after the night before, which in question was my friend Andrea's hen do. There was drinking at the beautifully decorated Jewel cocktail bar on Piccadilly Circus and karaoke and set menu Chinese food at Imperial China in Chinatown. The food at Imperial China was actually quite nice especially the pork in ginger dish.

On Sunday I woke up tired but without a thick head, stuck to light drinking you see. After being cooked a delicious breakfast of scrambled eggs with smoked salmon by Jessie's cousin whom we were staying with, I said goodbye to the beautiful Siamese cats that I had the pleasure of being pestered by throughout our visit and headed from Tufnell Park to Angel.  It was still early so I read my book and watched the rain with a hot chocolate in a nearby cafe. I was due to meet my super lovely fellow excitable foodie Julia for lunch and was really looking forward to a good catch up mostly talking about our latest food experiments. Once I got the signal I went off to meet her and we travelled down to Chinatown.

After a good amble about deciding where to eat and sifting through the Chinese supermarket for various delights we settled on Taiwanese restaurant Leong's Legends. 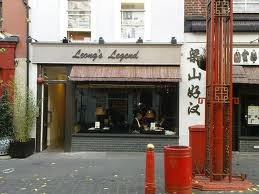 You have to knock on the door to be let in, which was some what of a novelty. It is quite a small restaurant inside with lots of dark rustic wooden tables. We settled in the corner and sat down with the menu to decide. We decided ordering a few dishes and sharing bits and pieces would be a good way to test more of the menu. We chose, crispy chilli beef, sticky rice steamed in bamboo, some char siu bao, siu mai, prawn dumpings, fried turnip cake and their speciality Legend's xiao long bao or siu loung bao as they are on the menu.
This was my first experience of xiao long bao, they are described as soup dumpings, I assumed they would be dumpings in a soup. I was wrong. They taste a lot like gyoza, minced pork with ginger and other fragrant spices. However the difference is that they have soup stock inside them. They make these by popping a gelatinous soup stock cube inside the dumping which then dissolves when they are steamed. These were delicious if you see these on any dim sum menu order them immediately, although wait for them to cool a bit first.
The crispy chilli beef was spicier than I've had before but very tasty. The sticky rice came in a mini barrel for us to scoop out. It had mushroom, chicken and shrimp mixed in with it and was simply wonderful. I was pretty slack taking photos because I was too busy eating and talking but we ordered just the right amount of food. The siu mai were stuffed with pork mince and shrimp and might have even been better than the ones I had at Dynasty. The fried turnip cake was a revelation it was almost creamy with a very slight hint of sweetness I am definitely keen to try it again it was just so different.
Finally, always a favourite the prawn dumplings, they look so pretty the crimped translucent bundles of peachy coloured joy. These were some of the chunkiest shrimp filled ones I have tasted so far and the casings just melt in the mouth.

Lunch for two with Chinese tea accompaniment cost us £17 each a total bargain for all the food we had if you find yourself in Chinatown definitely pay Leong's Legend's a visit it is really worth it.

This weekend we are off for a barbecue where I will show off my Pina Colada making skills, wish me luck it's been a while.