Menu Sampling at Filini at the Radisson Blu

After a delightful lunch at Hotel du Vin the other week, I was also invited by Bristol Bites to Radisson Blu's Filini restaurant to the chef's table to showcase their new Sardinian menu. There were only 5 of us there which made it feel extra special, after being greeted with a glass of Prosecco we were led into the kitchen to watch the chefs at work. 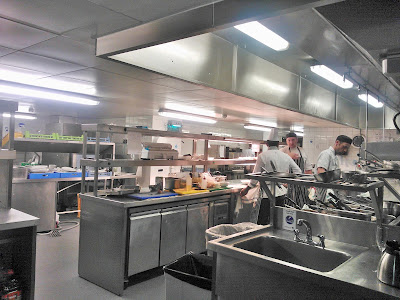 It did feel somewhat odd being sat in the kitchen drinking and eating whilst people worked around us but actually there was no chaos and the atmosphere was pretty chilled. Our glasses were never empty and it was  great to see how enthusiastic everyone was. We were treated to six miniature courses most of which you will find on their Tour of Italy: Sardinia menu, which concludes on the 16th of June before they head on to the next region.

The canapés were brought out in a cloud of dry ice, reminiscent of the video for Total Eclipse of the Heart, I did almost expect some heavenly 80s soft rock chorus to kick in. 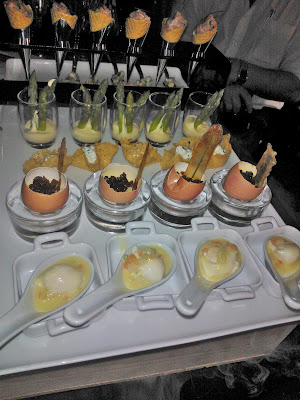 These were as delicious as their entrance I actually didn't get to try the asparagus or the salmon tartar ones but the truffle custard on egg with crispy pancetta and chive crisp was a particular highlight. Savoury custard is definitely a strange concept. I have personally only come across it in chawanmushi, a Japanese dish that did not endear itself to me when described by my friend Matt as 'imagine a savoury creme brulee'. This was definitely something I did not want to imagine. This savoury custard however was smoky and full of richness. It sort of tasted like a fancy breakfast in a few bites. The king prawn with avocado salsa was another favourite, a really chunky prawn with a fresh but not overwhelming accompaniment.

The first starter to emerge was a lemon risotto with a chunky langoustine resting on the top. This was delightful. It was fresh, light, melted in the mouth, perfect flavours for Summer. The antipasti contained a few surprises, mainly the wonderful lamb prosciutto and smoked ricotta. The latter was definitely my highlight I have never had smoked ricotta before it was in no way bland and the smokiness really shone through the rich creamy texture. I found a whole wedge of Pecorino to be a bit heavy for an otherwise light board but that was possibly personal preference, strange as I adore full bodied cheeses usually.

Unless you discount sushi, of which I eat a lot of, I don't tend to order much fish when I am dining out, I have no idea why, but it is something that I must rectify. I found the monk fish tasty, the sauce in particular was excellent but for me it was nothing compared to the enjoyment I experienced upon tasting the lamb. The lamb was pink and tender, accompanied by a rich full bodied, meaty sauce. The beans were very well cooked, it might have been my favourite dish of the night but we had so many amazing things I am still not sure I can completely commit to a favourite.

We were brought a beautifully presented tray of miniature desserts which looked almost too good to eat. But being advised the chocolate mousse disc would melt fairly swiftly we tackled that one first. A melt in the mouth disc of mousse coated in cocoa powder, sheer heaven. As I don't like coffee flavoured anything, one of my only dislikes, I did not try the tiramisu but it looked very pretty and delicate. My favourite was the biscotti with fresh raspberries, both sweet and tart enough to make the perfect pudding.


The chef's table experience was a wonderful one, if you ever see a restaurant offering such an event up, you should definitely take it as it was different and for me felt like a special evening. For more information on Filini visit their section of the website on the Radisson Blu website here. There is video available of some of the food preparation on the night definitely check this out, I get a very quick cameo as well.

As this was a showcase chef's table this meal was free of charge but did not impact how I felt about the food served, the photos speak for themselves. To see what Bristol Bites thought of the evening check out her review here.
Posted by Abby and Rich at 15:22