The first Friday of August Kym was invited to a preview evening of CAU, Carne Argentinan Unica by the way, to give feedback to the restaurant before their opening the following Monday. Such a saint is Kym, she invited me to come with her so we could experience what the latest steak restaurant in Bristol had to offer. CAU is run by the same team who brought us fancy, mostly London based, Argentinian steak chain Gaucho, and was launched as a more accessible and more affordable version. We were welcomed by Edward, our waiter for the evening, into the restaurant and he was enthusiastic and attentive, a great guy. I would describe the decor as how 60s entertainment execs imagined life in space would be, think Space 1999 or 2001: A Space Odyssey and you have CAU's interior down to a tee.
The menu for CAU, as you would imagine, is largely beef based but other than steak you can order pork belly, a burger, chicken and fish, there are few vegetarian options but largely I would say the choice is mainly a carnivore's playground.  I ordered a large glass of Syrah and Kym tested one of their mocktails, it is worth noting they do a selection of Malbecs as well so you can match your Argentinian steak with a home grown wine. 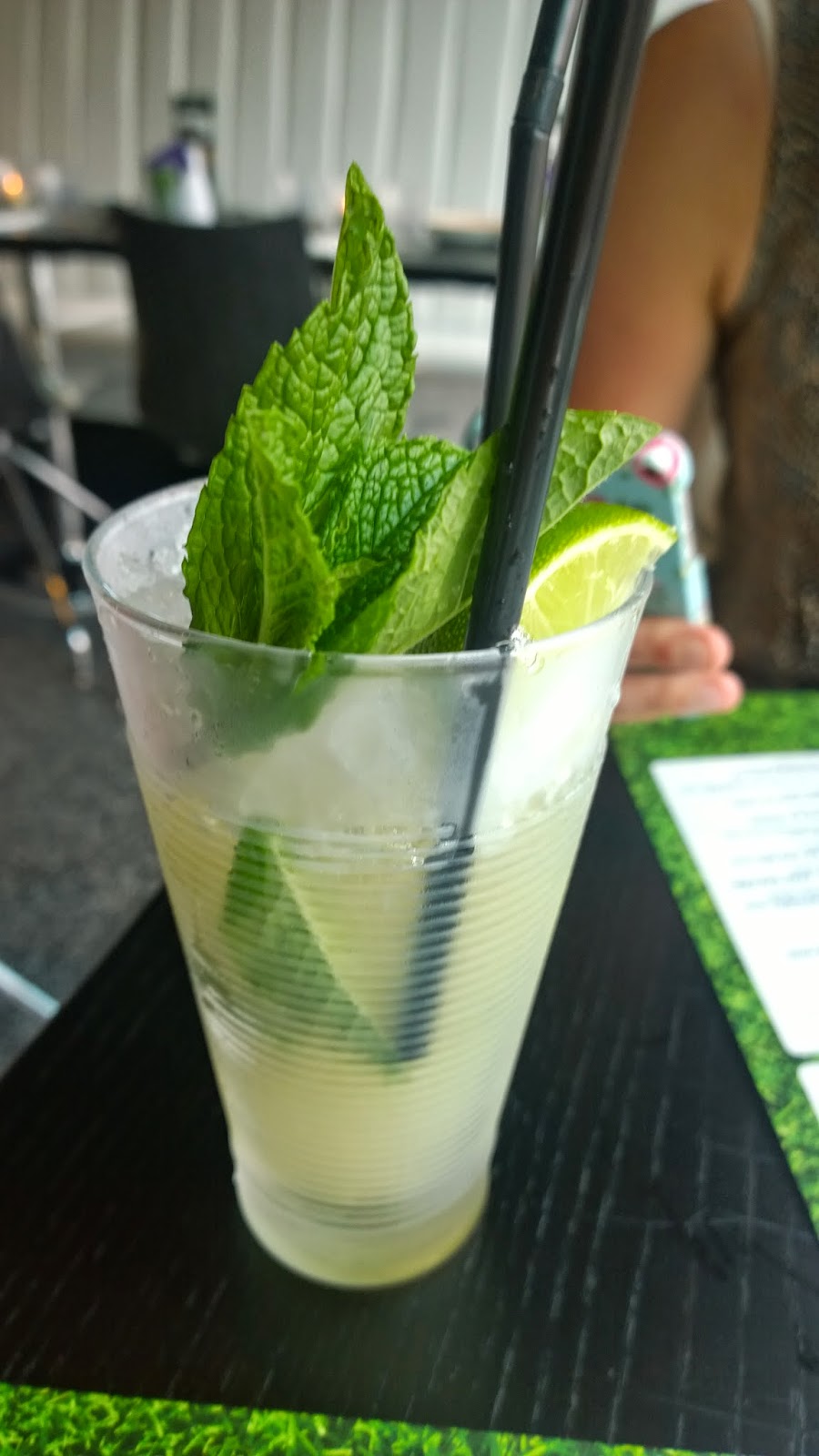 There were some tempting dishes on the starters/small plates menu we decided that sharing two was the best policy so we opted for the salt and pepper squid which came with chipotle mayonnaise plus a dish of the belly of pork tempura with 'CAUchup'.  Steak wise they all come in grams so I have imperialised them for the sake of comparison to other steak places. CAU offer a fair few options starting with an 8oz rump for £13.95 but they also offer some more unfamiliar cuts the most expensive being an 18oz Tira de Ancho, described as the King of Steaks.

Rib-eye has always been my favourite cut so I decided to order the 12oz version cooked medium rare. Kym opted for the Tira de Ancho, a spiral cut of rib-eye marinated in chimichurri and grilled slowly, although ordered rare, Edward said that the chefs recommend having it medium rare because it is such a thick cut. It is worth noting that all CAU steaks come with chips, thin or thick, or a salad.
The starters looked pretty tasty, and the portions were fairly generous.  The squid was crunchy and well seasoned with the heat from the chili coming through nicely. I personally found the chipotle mayonnaise a little heavy and cloying for the squid but the flavour of the mayonnaise would be great with chips. If you try any starter at CAU let it be the pork belly tempura bites, wonderfully juicy melt in the mouth pork with a crunchy tempura shell, hugely indulgent and addictive. The self titled CAUchup, made in house, was like a light smokey barbeque sauce and it paired with the pork belly bites very nicely. 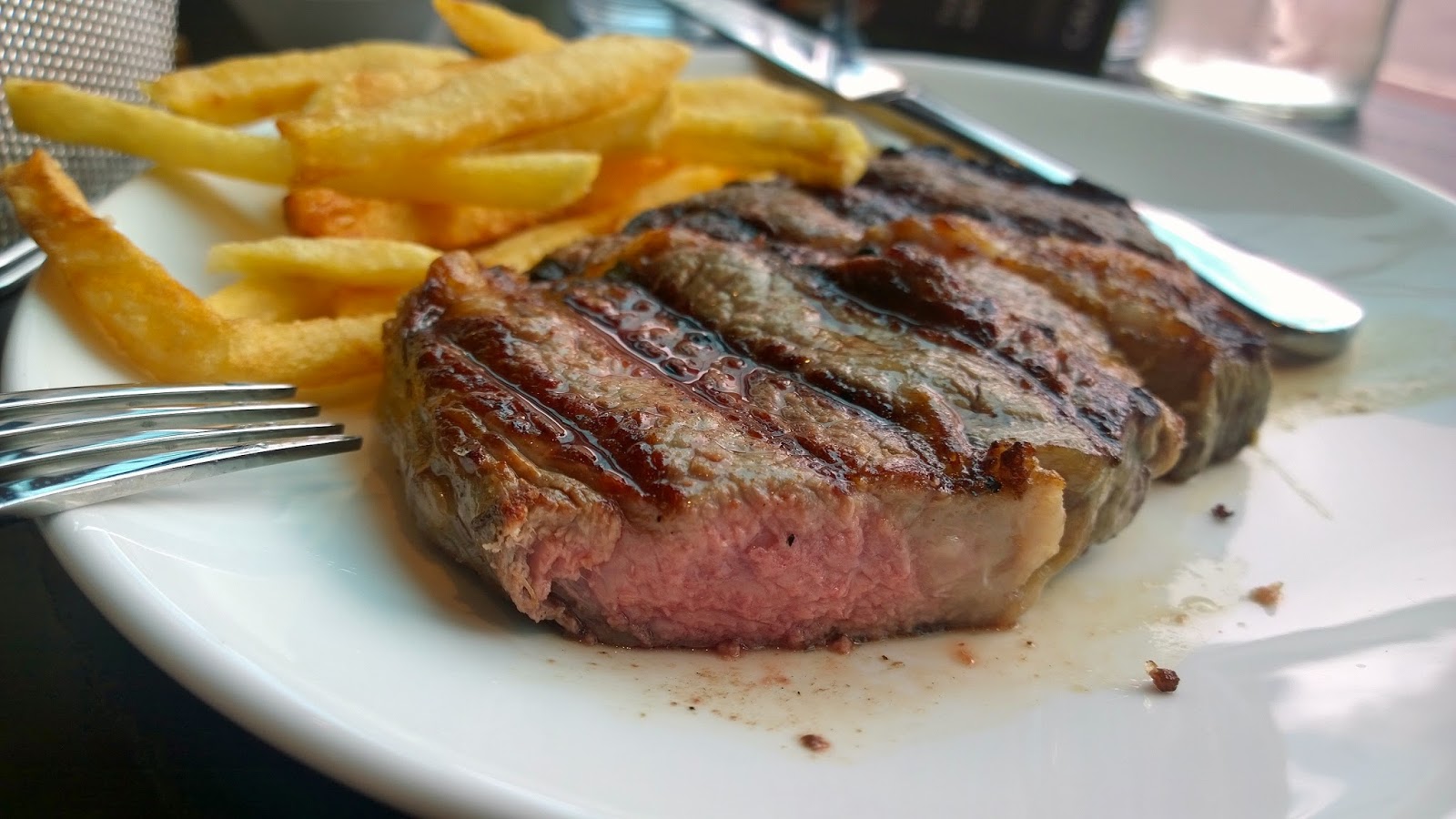 My oh my, what juicy steaks these meaty beasts turned out to be.  I was pretty surprised by how good the steak was actually, really well seasoned, chargrilled flavour and perfectly cooked, I would go as far to say this was the best steak I have sampled in Bristol so far, although I have yet to try the hallowed Ox yet.  The fries were nice and crispy, I always prefer fries with a steak given the choice so you don't fill up too much on a thick cut chip.  Kym's steak was pretty large but full of flavour and I always enjoy a chimichurri sauce with a steak as it adds a fresh element.

Nicely full we had just about enough room for a scoop of coconut sorbet, they do a little 1 scoop for under £2 for when you want something sweet but nothing too heavy.  All in all CAU offers up some extremely tasty steaks, I was very impressed, I think some of the small plates are a touch pricey but they were very delicious and ours were rich enough to share.  If you like steak then I strongly urge you to pay CAU a visit, it will surprise you.  As a preview evening our food was free but we paid for our drinks and the service charge, this did not influence how I thought about the meal though, I am too opinionated for that. To find out for yourself what CAU has to offer visit their website.
Posted by Abby and Rich at 14:15