An Unplanned Lunch at Sandwich Sandwich

So on Tuesday I found myself unable to take up my usual lunch plan as the work breakout area had been shut off for eating, so my soup and crackers were left uneaten. I decided to treat myself to lunch out and I fancied something cheering and indulgent so I picked newly opened Sandwich Sandwich on Baldwin Street to give me a food pick me up. Sandwiches are a bit of passion of mine which I don't indulge in too often these days but I used to be known as the Sandwich Queen at home.

I arrived at Sandwich Sandwich just after 1pm and wow is this place popular already luckily the queue was dealt with swiftly thanks to a highly organised production line. There is a lot to choose from, house sandwiches, baguettes, hot sandwiches, flat breads, salads, cakes and their already famous scotch eggs. It is worth noting that they even do vegetarian scotch eggs made with falafel, very clever Sandwich Sandwich, I see what you've done there. 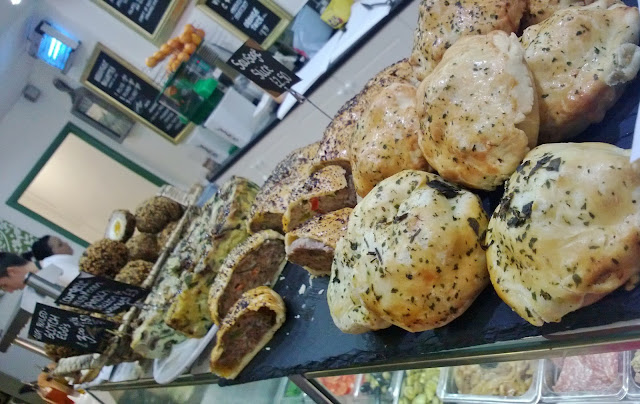 The picky appetite can rejoice as you can subtract or add any items you like at no extra cost, unless you want to add more meat, and frankly who doesn't (sorry vegetarian readers). Although I toyed with the idea of choosing the jerk chicken flatbread or the porky parcel, thick cut bacon, ham hock, pork loin, stuffing, celeriac remoulade, apple sauce and crackling dust I eventually decided on the pulled pork flatbread which was toasted and filled with Mexican rice, guacamole, cheddar and spinach. So after about a 5 minute wait and handing over £4 to the cashier I headed off to find a place to eat and read my book.
Oh my word! I knew it was going to be tasty but this was some sandwich! It was enormous for one thing and I could feel my hunger growing as wafts of my lunch escaped it's papery prison and I quickly freed it to receive my bready reward. Sandwich Sandwich certainly know what they are doing, this was an award winning flatbread.

The pork, which I technically wouldn't describe as pulled because it was more chunky, it was however obviously slow cooked as it was very tender and juicy. There was nothing I didn't like about this sandwich there was just the right amount of rice and it was nicely spiced but not spicy the cheddar was mature so gave a lovely rich creaminess to the whole flatbread. I could go on but I think the pictures speak for themselves.
It is probably one of the best sandwiches I've had, definitely on par with the one I had at Mi Casa at the Big Chill a few months ago. It was generously filled and they make their own bread, so I urge you strongly to go check out Sandwich Sandwich it has so many lunch options and the flavours are really good. Plus you can make up your own sandwich combinations with as many fillings as you like, so let your imagination run wild. To see what Sandwich Sandwich can tempt you with check out the menu on their website. Next reviews to come are on finally my sampling of Meat and Bread at the Three Tuns and lunch from Bao Wow.
Posted by Abby and Rich at 11:42