A Sunday at Gas & Co

In this blog Rich covers our recent trip (yesterday), to Gas & Co.

And God created BBQ food. And it was good; delicious even. And then somewhen around 2011, in the UK, and probably aided by Man Vs Food and other Food Network shows, everyone started to go BBQ and pulled pork crazy, reaching a new high in 2013 when seemingly every restaurant and every bar started doing pulled pork on their menu – with massively varying degrees of success. When Grillstock eventually opened their first restaurant in Bristol last year, it was met with very enthusiastic reception, offering choice meats cooked in an authentic tender, juicy and succulent manner, that for the most part most people were happy to overlook the canteen style seating, lack of being able to book, and the perhaps too high price (because the burnt ends are delicious).
Jumping on the same American Diner/BBQ/pig-out food phenomenon bandwagon, Gas & Co opened their new restaurant in the old Henry Africas bar on Whiteladies Road, arguably to near equally great expectation. It would be wise then, from this point in our tale to lower those expectations.

We had a good start to our dining experience, being greeted at the door by a friendly waiter who asked where we’d like to sit, showed us to the table and then promptly fetched a menu. Perusing our choices, we fairly quickly decided what we’d have to eat and drink, and then waited. 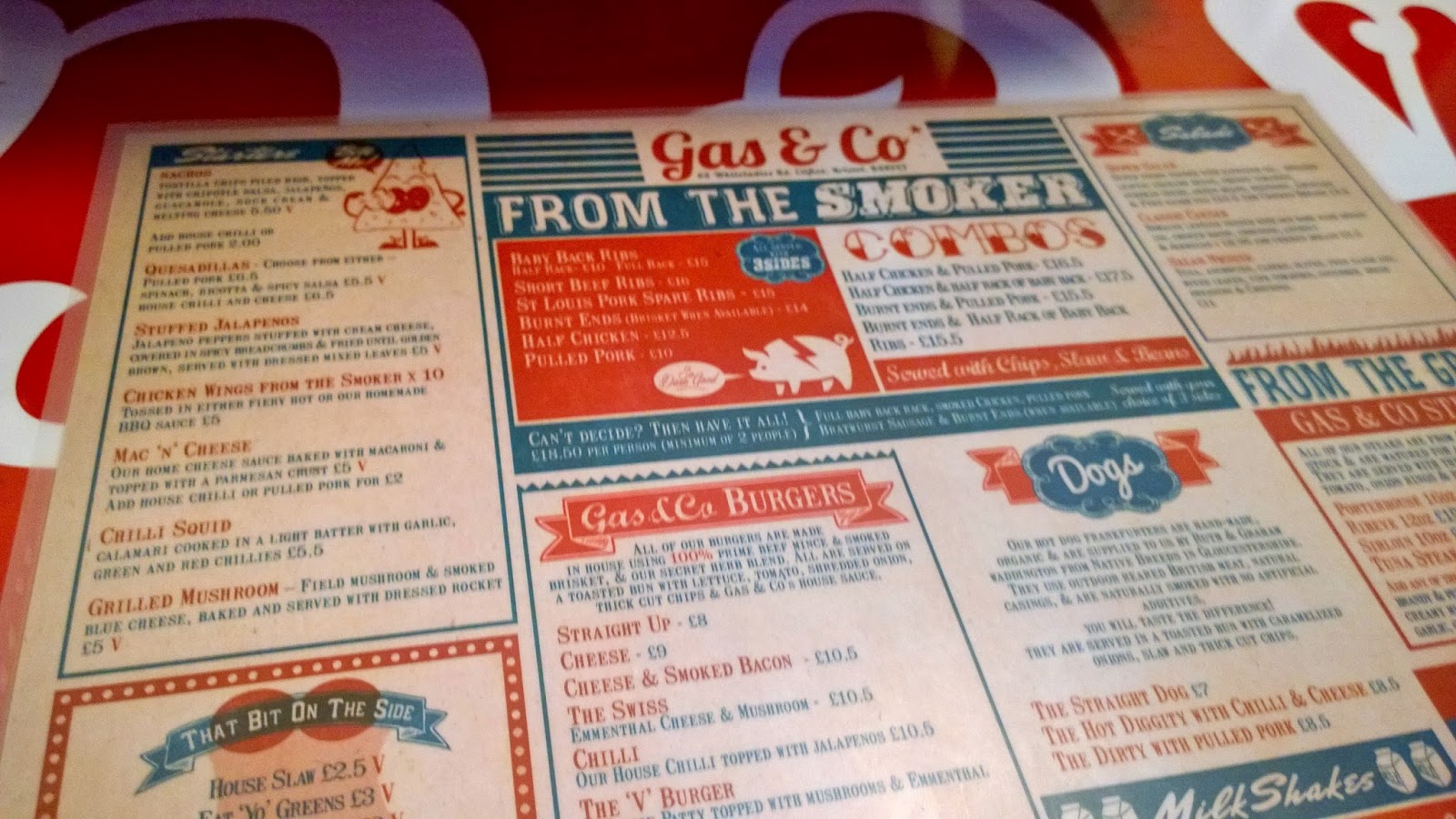 Whilst waiting we were able to take in the surroundings. The first thing you’ll notice is that although labeled an ‘American Diner’, it is in a distinctly half-arsed way. Diner signs, red and white patterns and the occasional Americana picture indicate what Gas & Co is aiming for, but mostly it still feels like a bar that serves some food. Adding to the bar feel is the fact that it’s quite hard to actually discern who’s a member of staff – our waiter had an apron on, but everyone else working there seemed to be dressed in jeans and casual shirt. Additionally although we counted five different staff (maybe there were more, we couldn’t tell), only about two of them seemed to be in the ‘restaurant’ at any one time. Whilst we were waiting to give our orders, one was behind the bar having a chat with his mates, and the other was counting out a box of napkins; all this while the place was easily more than half full, and new diners were walking in.

After fifteen minutes our waiter re-appeared and we gave our orders. I was disappointed that root beer wasn’t available (not that I’m a huge fan, but Dominion Vanilla Root Beer served in most diner-y places now is a new favourite beverage) so went for a pint of Pepsi, and Abby chose an Oreo milkshake. For food, we went for half a rack of baby back ribs, a bacon and cheese burger, and some quesadillas with pulled pork and cheese - classic comfort food basically.
Drinks arrived after a five minute wait, and it wasn’t a great start. My pint of Pepsi was two-thirds ice, and the mixture was clearly off, tasting too much of the carbonated soda. Again, what you expect from a bar. Not a restaurant. The milkshake was an interesting hit-and-miss though; thick and with plenty of Oreo pieces and taste on the upside, a weak blending that meant all the ice cream was sat at the bottom in a sludgey pile, and a strange quite unpleasant hard-to-kill greasy film after-taste on the down side.

Food arrived fifteen minutes later and it looked good, and plentiful. The quesadillas were tasty too, but with plenty of extra filling that wasn’t exactly as advertised - each of them seemed to be equal parts pork, barbecue sauce and red onion, with a smattering of cheese as an after-thought. The pork and BBQ had a good taste to it though, and the quesadillas themselves were nicely cooked.
The ribs came with a good amount of sides and trimmings, but mostly they just disappointed. The salad was dry, with plenty of brown edges (bringing to mind the supermarket bags of salad I occasionally bought as a student), and the coleslaw again seemed to comprise mostly of onions. The house beans were also oddly named given that we saw very few actual beans in there, and bizarrely what looked and tasted like chickpeas. The chips though were good. Although it was felt that these were probably shop bought home fries, they were soft and fluffy on the inside, had the right amount of crispiness on the outside, and they were also nicely seasoned. Awkwardly they were easily the best part of the meal. 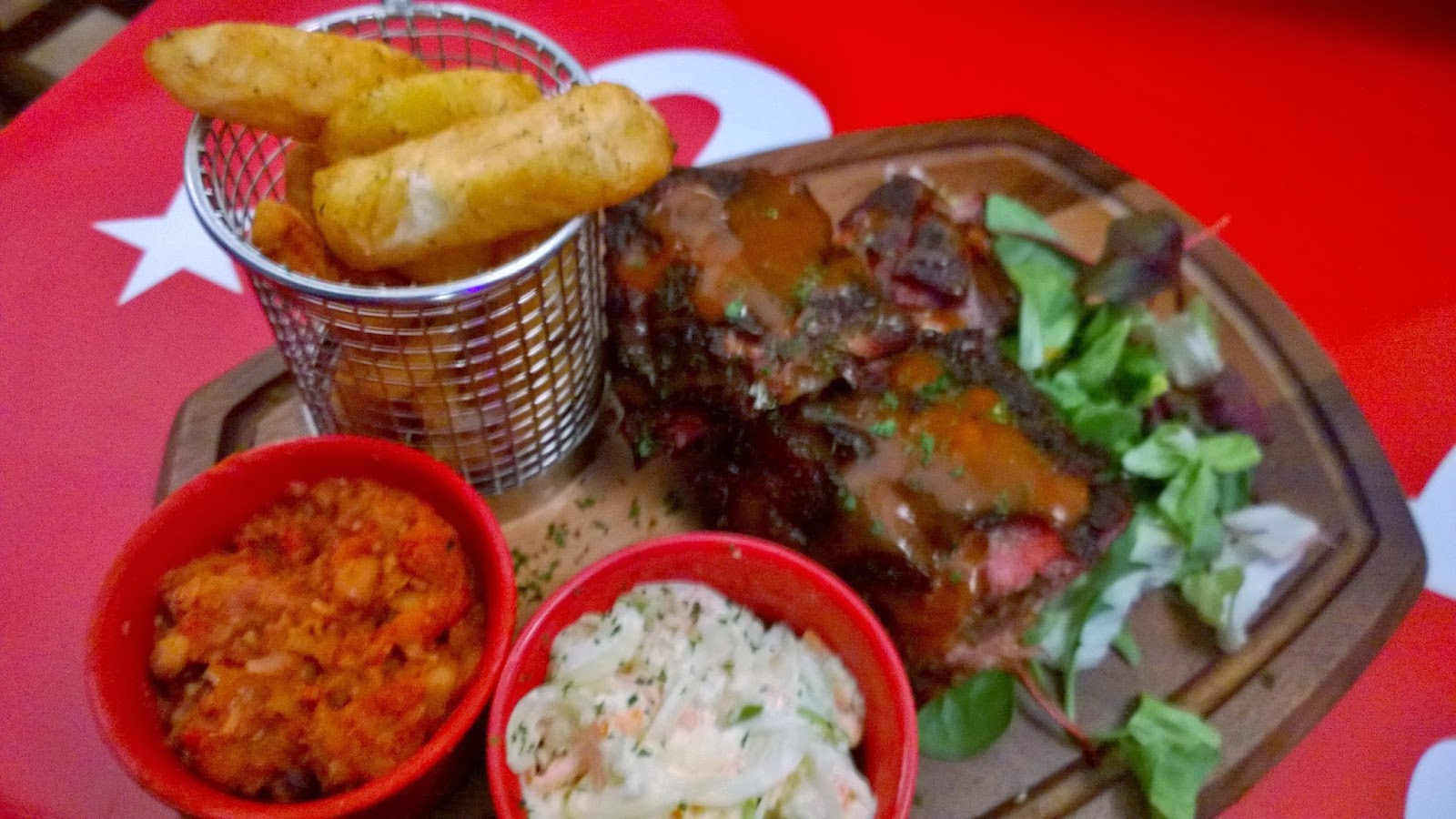 Ribs, especially baby back, should always be sticky, juicy and tender, with the meat just falling off the bones. Mine managed to be none of these, being tough and chewy, and instead of possessing a sticky exterior, being burnt and crispy (which you could pull off separately) . If it weren’t for the nicely spicy BBQ sauce on top of the ribs, they would pretty much have been a write-off.
Abby’s burger at first looked like the winning selection, despite the obviously supermarket bought bun. The bacon was thick and perfectly cooked, and the cheese was plentiful, but the burger – the main event – just let everything down. At first look nicely cooked, it was actually dry, overly chewy and lacked any real flavour or seasoning.
Looking at the half finished meal in front of us, we were hardly in the mood for a mediocre dessert, so looked to settle the bill and then leave. Sadly getting attention of any of the staff proved impossible, so we got our coats, left too much money on the table (ie. the amount to cover the bill) and walked out.

So, where does that leave us with Gas & Co? Staffing and service definitely needs working on – we had a good waiter, but for the most part the staff were elsewhere or otherwise distracted. Aside from that, the effect really is one of everything done on the cheap. An onion coleslaw, a bean dish noticeably low on beans, a spongey burger bun that tasted packet fresh, dry and distinctly not-fresh salad, a badly-mixed heavily iced Pepsi, a cheap tasting oily milkshake, dry burnt (or re-cooked?) ribs, food wise there isn’t really a lot to recommend the place. Most of the food overwhelmingly comes across as having been bought from a supermarket and often didn't feel freshly cooked.

You don't want to give a new place a kicking when they're still in start-up mode, but there was so much wrong with it when we went, that there is little-to-nothing to recommend it (chips are nice, and the bacon was good - that's it). And anything that can be ordered there is better everywhere else AND cheaper too. If it's to survive, no easy task given the prime and expensive Whiteladies Road location, it needs a major re-think and overhaul.  Gas & Co. don't seem to have a website yet but may I direct you to our Grillstock review from last year instead?
Posted by Abby and Rich at 12:45